I’ve had some random thoughts floating around in my head lately. They were some things that I thought might grow into a blog post, but they never quite seemed to get there. They didn’t seem deep enough or profound enough. There were no key take-away points taking shape in my head.

Then, I remembered a post I read awhile back about getting back to old-fashioned blogging and I thought you, my blogging friends, might just enjoy some idle chitchat – that you might enjoy my random musings. The kind that I might share if we were just hanging out, enjoying some sweet tea.

One thing I’ve been thinking about lately is Megan’s room. She’s told me many times that several friends have told her that they can’t believe her mom let her decorate it like she has. It looks a little something like this: 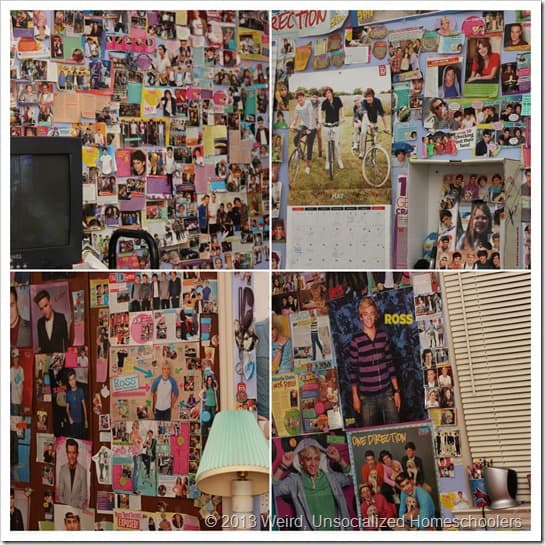 As you can see, there is very little surface area that isn’t covered with a poster or a picture cut from a magazine. That wall of tiny individual pictures is a particular source of pride for her.

I got the same sort of questions when I let Brianna get blue streaks dyed in her hair.

The thing is, that doesn’t bother me. Megan’s wall is a reflection of her – her style, her personality, her interests and her creativity. It’s just paper and tape. She’ll get tired of them and pull them off the wall and we’ll paint.

Brianna’s hair color washed out – much sooner than she expected, just for the record. It was supposed to be permanent, but it only lasted about two weeks.

There are a lot worse things they could be doing than wallpapering their rooms with today’s version of Shaun Cassidy or dying their hair blue. There are probably things that they’ll want to do that I’ll say no to. But these little expressions of creativity that don’t hurt anything? I’m okay with those.

The way I figure it, if I give them a little freedom to express themselves, maybe those inevitable no’s will mean something to them. Maybe they’ll look for the heart and the wisdom behind the no, rather than just hearing a denial.

I think, sometimes, we get so caught up in looking at the surface of things that we don’t see the heart.

Megan’s trying to decide between blue streaks and hot pink for her hair and I’m making her wait until she’s a little bit older. There will be people who will make snap judgments about her based on that…and I know that I do that to people, too. Thinking about other people coming to wrong conclusions about my kids is a strong reminder not to do that to other people.

We need to not make snap judgments based on appearance, but instead look at people’s hearts. Because maybe there’s a kind heart beating under that blue-streaked hair. There are sweet little bunnies under those boy band posters.

Any random thoughts roaming around your head lately?

Look for random thoughts about marriage and empty nests coming up soon.