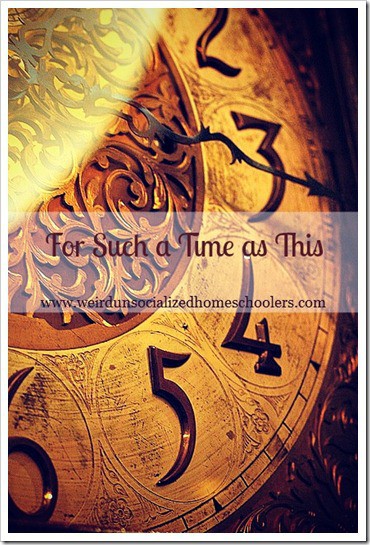 I finally started a new book this weekend. It’s one that I picked up several months ago at the used book store and have been dying to read, but things just seemed to keep getting in the way. It’s called Queen Esther’s Reflection by Ann Platz. The book takes a look what relevance the Biblical book of Esther holds for women today.

I’ve really only just begun the book, but already my favorite phrase from Esther has caught my attention, for such a time as this (Esther 4:14).

We aren’t just here randomly, by chance, so that our lives may meander along, come what may. God has placed us here. He has ordained our lives for this place and this time with this circle of influence. We are here for His Kingdom purposes.

From one man he made every nation of men, that they should inhabit the whole earth; and he determined the times set for them and the exact places where they should live. – Acts 17:26

From the beginning of time, God knew when and where I would live. He knew the man He had created to be my spouse and the children He would give me. And, He gave them to me for a purpose.Despite the way we may sometimes feel, our lives are anything but mundane, ordinary or random. God placed each of us here for such a time as this.

What has God called you to do today?