We have been enjoying a fun new way to practice facts this week: a giant board game! One of the products that we’re currently reviewing, Rocket Phonics, included, as a bonus, a set of giant, printable ‘sound cards’ — one sound per page. There were some ideas for use, but many of them were for younger kids, so I came up with the idea of using them for a giant board game.

The first thing I did was make a giant die: 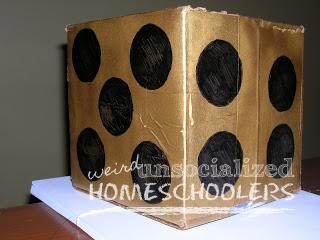 I simply started with a small, square box and spray painted it gold. Gold just happened to be a color I had. Any light color would do. Then, I used a bottle cap as my template for tracing the circles. Finally, I drew over my penciled in circle with a black Sharpie marker and colored them in.

Then, I printed the sound cards out on card stock and had the kids arrange them in the living room floor in a game board pattern. (Ignore the bits of paper in the floor. I vacuumed the next day.) 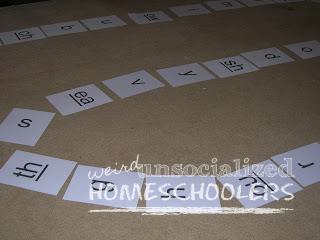 (In case you’re wondering, many of the ‘sound symbols’ are simply letters and, yes, Josh and Megan have known their letter sounds for a long time. However, some of the symbols represent digraphs or the sound of certain non-phonetic sounds that I want to ensure that they recognize quickly and easily before we move any further into the program. A full review of Rocket Phonics will be coming in a couple of weeks.)

We played by having the kids roll the die, walk that number of squares (beside the squares, not on them, since I’d like them to last a while) and say the sound they landed on. That seemed a bit easy, so we later changed the rules so that they had to say each sound between where they were and where they were going, stopping if they missed one. 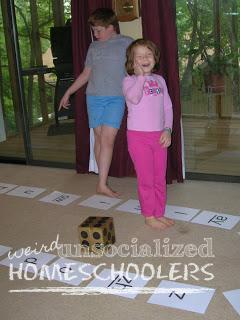 That look on Megan’s face is: Oh, no! She’s taking pictures! They know that a larger percentage of my pictures wind up on my blog.

You could play this game with any number of facts: math, vocabulary words, history or science questions are just a few that come to mind. It keeps everybody moving and engaged, which always makes learning facts more fun.