Our family has grown a bit over the last few days. You probably know that our much-loved cat, Gus, has been missing since before we went on vacation just before Thanksgiving. We’ve not seen any sign of him and have resigned ourselves to the idea that he most likely fell prey to the coyotes that we had no idea existed in our area until he went missing.

I was supposed to come back last Friday and update my Weekly Wrap-Up post, but I still haven’t found time. Part of the reason was that we were out most of the day on Friday, volunteering at the animal shelter. The girls really enjoyed walking some of the dogs. 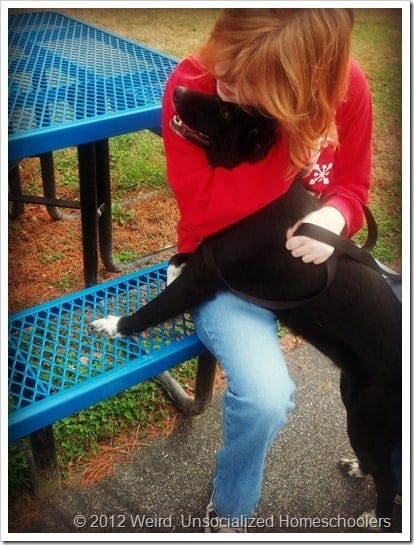 And the dogs loved being out of their pens.

We’ll be going back this Friday, but we’d have already been back a couple of times if Megan had her way. It was really exciting to discover, when we got back from walking Buddy (below), that one of the first two dogs we walked was being adopted! I’m so glad we got her (the smaller black dog above) back in time to find her new family. 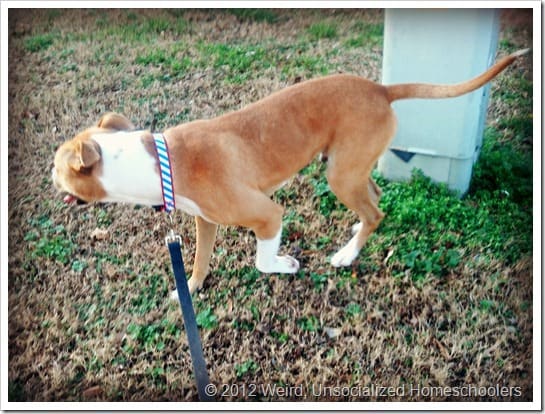 The other thing that was going on when we got back was that this little ball of fluff was being brought in: 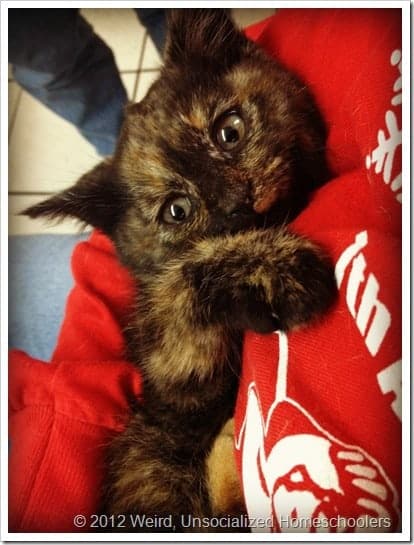 She was a feral kitten that had been caught in a trap. Despite being feral, she much preferred being held to being in a trap or even a cat carrier. We all said that she matches Peanut. The girls started begging to bring her home, but I wasn’t sure about it.

By Saturday morning, I was.

I had showed Brian and Josh the picture that Brianna took (above) and they wanted to bring her home, too. The shelter was closed for the weekend, but I had the cell number for one of the shelter employees. So, I texted her and made sure she knew we were coming to get the kitty on Monday.

Then, we went to Petsmart because Megan likes to go on Saturdays and play with all the dogs and cats there for adoption. That’s where we met Lily, a six-month-old calico. 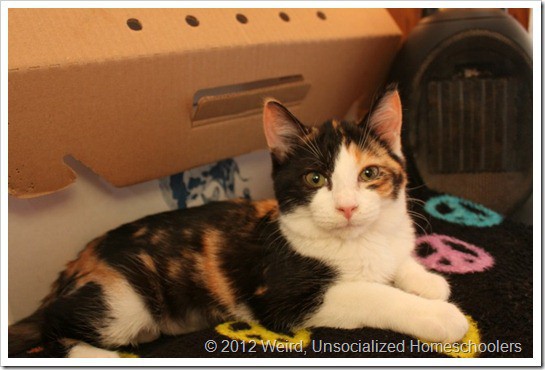 After we’d played with her for about half an hour, the following conversation ensued:

Brian: Do you want her instead of the cat at the shelter?

Me: {shakes head no}

Brian: You want them both?

I said it must be that Gus was so awesome, it’s going to take two cats to fill the empty spot in our lives. It wouldn’t bother me one tiny bit if he came back today, though. I sat in the bathroom floor Saturday night, petting Lily and crying because she’s not Gus.

Both kitties are so sweet, though! 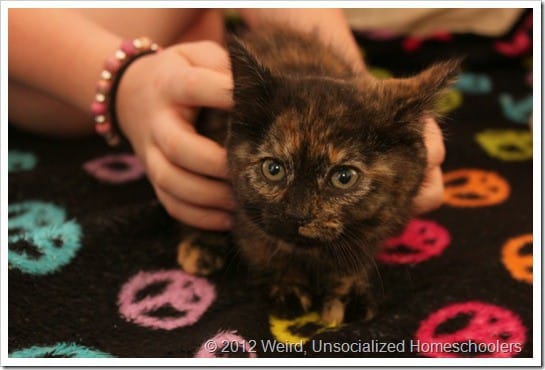 It’s only been two days and Luna (above) is already more tame than I expected her to be by the end of the week. Lily – the one I thought would be more accepting – keeps hissing at Luna and Luna just looks at her, as if to say, “Whatever.”

Already Luna, who I’m guessing is about 8-10 weeks old (I’m hoping the vet can give us a better idea tomorrow), has quit hiding when we enter the bathroom (where we’re keeping her confined until she’s less fearful). She hasn’t hissed, growled, or clawed at all. She’s gotten comfortable enough to play, explore, or even sleep when we’re in the room and she even purrs when we pet her. 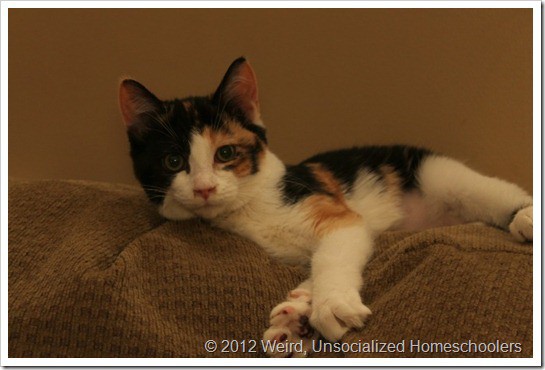 Lily already acts like she owns the place, sleeping on the back of the couch, someone’s lap, or wedged between my back and the back of my desk chair. She starts purring as soon as someone touches her – or simply looks at her – and runs around the house meowing when she can’t find her people.

She’s still hissing and growling at the dogs and Luna, but not as much as she was at first. For their part, the dogs have been fantastic. They are nothing more than curious about the cats – no growling or aggressive behavior at all.

I guess they got all that out of their system with Gus. His introduction to the dogs didn’t go so well. Then, they all decided that they liked each other. I really think Peanut has missed his cat buddy. 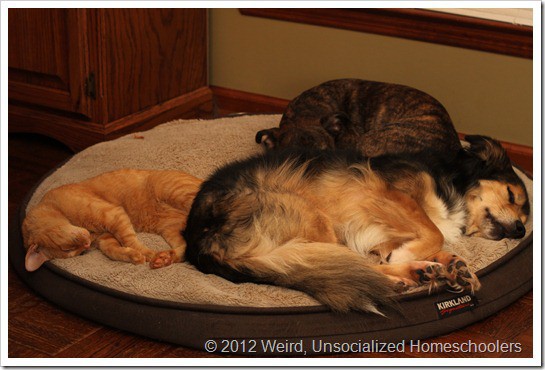 It’s not the same without Gus, but it’s been less lonely with the new kitties in the house. And it’s a good feeling knowing that two more kitties have a family who will love them and spoil them rotten.

Oh, and the boys may try to act like it’s all us girls, but Josh has had Lily in his lap while he  plays video games and Brian has spent time getting to know Lily and Luna after work all week. Yep, they may try to play it off, but they’re pretty smitten with the newest family members, too. 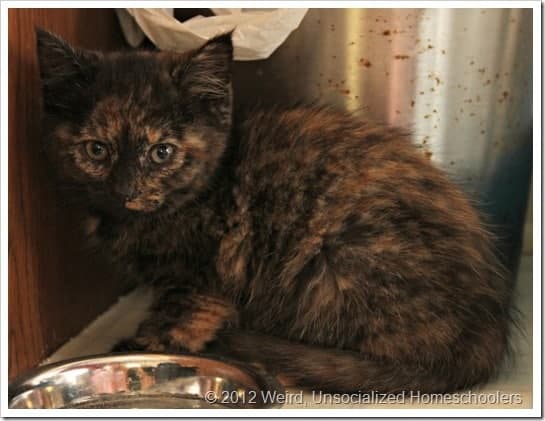 I love that that both have a little orange – little reminders of our Gus. My sister, who also has a calico, pointed out that the cat cousins match – Lily, Luna, and Layla. Next year we may have to take them to Petsmart for Santa photos – and then I’ll have to eat my words for laughing about that this year.

It was a great time to get the kittens, too. I think by the time we resume school in January, everyone will be settled in and Lily and Luna will be a welcomed addition to our school day, rather than a huge distraction. That’s what I’m hoping anyway.

Oh, and, no, these kitties will not be going outside. Stupid coyotes! I’m already envisioning a large, enclosed, outdoor play area if the screened-in deck isn’t outside enough for them.