I’d never even heard of spaghetti squash until a few weeks ago when I began my weight-loss journey.  In an effort to try new things, I bought one at the store this week.  I thought I’d share with you some of the new things I try, in case you’ve never tried them either.  It’s a whole lot easier to eat healthier if you have a wider range of healthy things that you like.

If you’ve never seen spaghetti squash, you’ll probably be surprised at how large it is.  It sort of reminds me of an oval honeydew melon in size.  I’ll warn you, it takes the strength of Hercules to split one of these things.  I could tell, as I was cutting it, that it was hollow on the inside.  I was really skeptical about whether or not I’d like it once I got it open and saw how much like a pumpkin it looked on the inside, especially the seeds.  I do not like pumpkin. 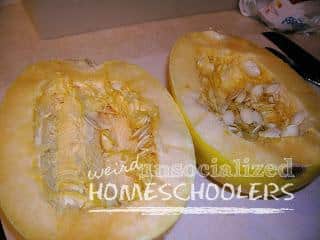 To bake spaghetti squash, you split it, scrape out all the seeds (again, very much like preparing a pumpkin) and place it, cut side down, in a baking dish (I sprayed the dish with Pam first).  Bake at 450 degrees for 45 minutes, then, turn the squash over and bake until tender (about 10 more minutes). 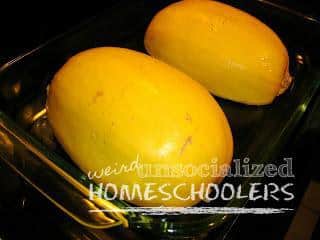 After baking, you simply scrape the “meat” out with a fork.  It comes off in strands that resemble spaghetti noodles, which is where it gets its name.  I then salted  the squash and topped with spaghetti sauce.  Now, if you’re expecting it to taste like pasta, you’re going to be disappointed, however, I was surprised that I really liked it.  It reminded me a lot of zucchini, because it’s a very watery vegetable.  It had a nice flavor, though, and I would gladly eat it in place of pasta — especially after comparing the two, nutritionally:

What really surprised me was how much Josh liked it.  He got sick after eating spaghetti several years ago and has refused to eat it since.  He tried the spaghetti squash with marinara sauce and loved it.  He finished off and entire plate and asked for it for lunch the next day.  We’ve still got some left over, too, even though we both had it for lunch for two days.  One spaghetti squash would easily feed our family of five. 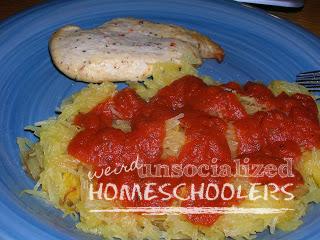 This is one new food that will definitely be added to our list of regulars.

Have you ever tried spaghetti squash?  How do you serve it?