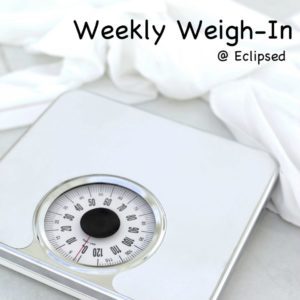 No, I haven’t fallen off the face of the earth; it’s just been a busy, busy couple of weeks.  I never did get around to posting my weigh-in post late week partly because I was just so stinkin’ busy and partly because I was a little discouraged at having stayed the same again.  This week, however, changes are afoot.  First of all, somehow, I managed to lose 2 pounds.  Even Brian, my biggest supporter, looked at me as if to say, “Really?  How did you manage to pull that off.”

He’s a smart man, though, so he didn’t actually say that.

As I’ve mentioned before, my motivation has really been off this summer.  Not completely — I’ve still lost, just not as quickly as I was before — but, off just the same.  I decided on Friday, after seeing good numbers on the scale, that I was ready to get serious again.  I explained to Brian that Monday — today — would be the the day…but this weekend would be my last hurrah.  I had one thing I needed to get out of my system before getting back to serious business.

I love Dunkin’ Donuts’ donut holes.  We haven’t had a Dunkin’ Donuts in our area in years — as in, the last time I had donut holes was when we went to Disney last year because there are two of them right down from where we stayed.  We ate 150 of them then.  Yes, one-hundred fifty.

So, anyway, a Dunkin’ Donuts opened here in July.  I’ve mentioned going several times, but Brian keeps telling me that I’ve worked too hard to blow it and he hasn’t taken me (which is slightly annoying, but mostly appreciated).  I told him Friday that I wanted donut holes.  One box for us to share, then, Monday, I was getting back to business.  So, he went and got us a box.  They were so good.

Yesterday, it was the weirdest thing.  It was like I could physically feel my motivation returning.  I had set myself a starting point and a goal — I want to lose 20 lbs. by Thanksgiving — and I was ready to get to it.  I’m hoping that a bit of a mental and physical break from the initial intensity of my weight loss journey will prove to have been a good thing for me.  I refuse to look at it as a negative.  I mean, I still lost weight over the summer, so I shouldn’t beat myself up that it wasn’t as much as I might have liked.

The other thing is that I’m moving my weigh-in day back to Mondays.  I think knowing that I have to weigh-in on Monday is good accountability for me on the weekends.  So, I’ll be moving the Weekly Weigh-In back to Tuesday mornings, for those who want to join me.

I’m looking forward to getting back to a more intense workout routine and seeing those pounds start to fall off again.  If When I reach my goal of 20 lbs. lost by Thanksgiving, I will be within 10 lbs. of my goal weight, so I’m still on track to reach my goal by the end of the year.  I could use some support, encouragement, and accountability, though.  Anybody with me?