What a week! Seriously, it hasn’t been awful, but I don’t think I could take too many like this. And my poor husband? He’s probably wishing he had just stayed at work.

He took the week off so we (he because he had a plan and was just going to handle it himself) could paint Josh and Megan’s rooms. We got all the furniture moved out of Josh’s room, the first on the agenda, and most of the furniture from Megan’s room on Friday night. 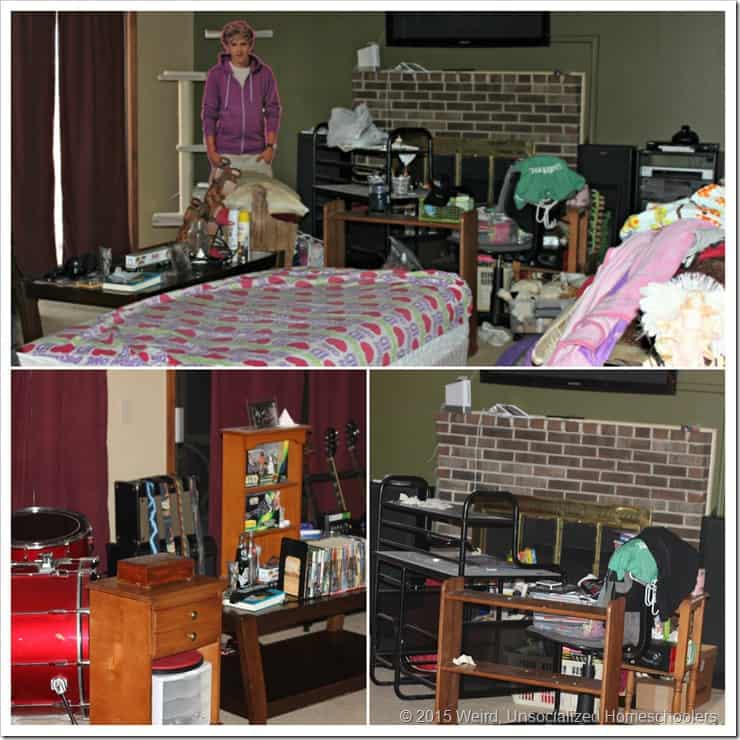 Our goal for Friday night job was to remove the wallpaper border and the 100+ Star Wars stickers that Josh and Megan decided to stick all over his walls forever ago (as in, they were probably like 6 and 8). 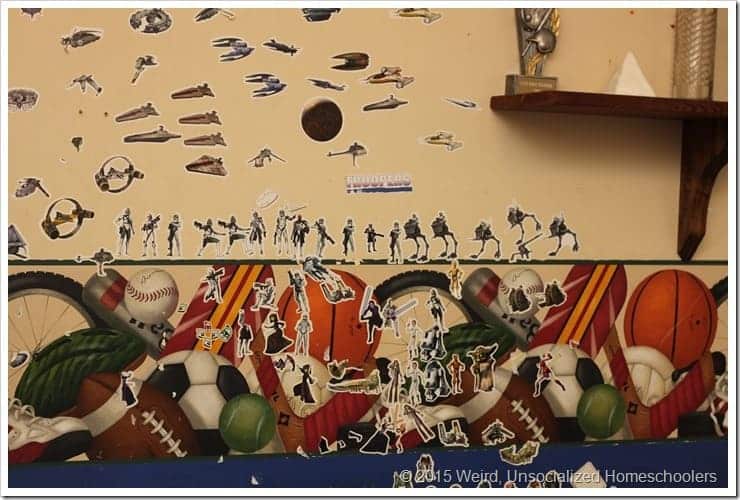 And that’s just one section of stickers. Thankfully, my sister and brother-in-law had some amazing remove-wallpaper-with-steam tool that really, really helped. Oh, and that border? We thought it would be just perfect until he was a teen if he turned out to like sports. He did not. He hated that border.

So, anyway, things were moving along. After breakfast Saturday, Brian started trimming Josh’s room. Then, he got sick. Fever, chills, aches. We were pretty sure it was the flu.

After church on Sunday, which Brian didn’t attend, we took him to two quick care places. Both had wait times past their close times. So, he got up first thing Monday morning and went to the doctor. Thankfully, it wasn’t the flu, but he’s still felt horrible all week.

Long story short, he’s been sick, felt bad, and fallen off a ladder this week. It wasn’t a big ladder, but it was enough to hurt his back. He spilled some paint when he fell, so we had to pull out the steam cleaner. He went into Megan’s room for something and got paint on his new shoes. (He managed to get it off.) And, we had newspaper stick to the paint on Megan’s wall, so we had to touch that up.

Even though it was a frustrating week, it was good to get Josh and Megan’s rooms finished. They look so much better! 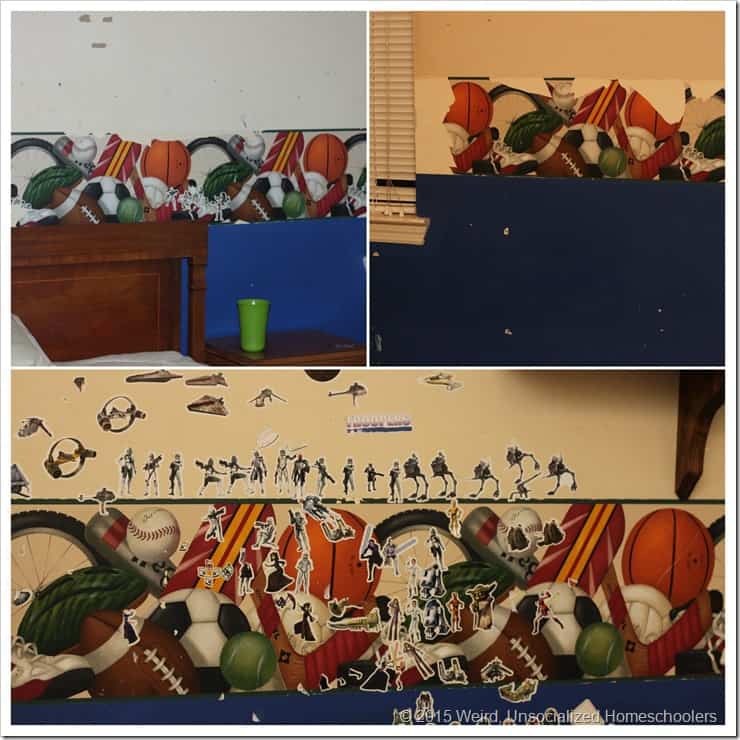 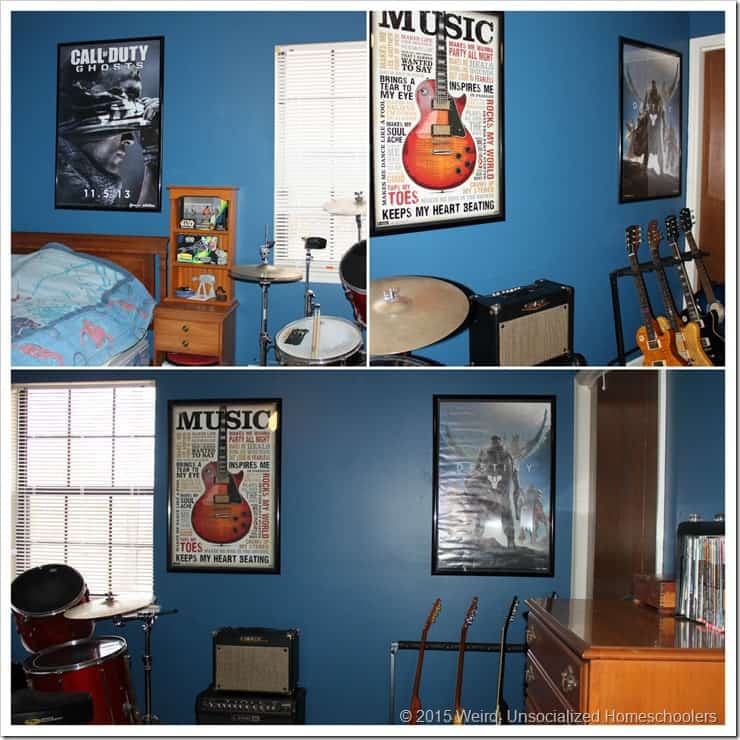 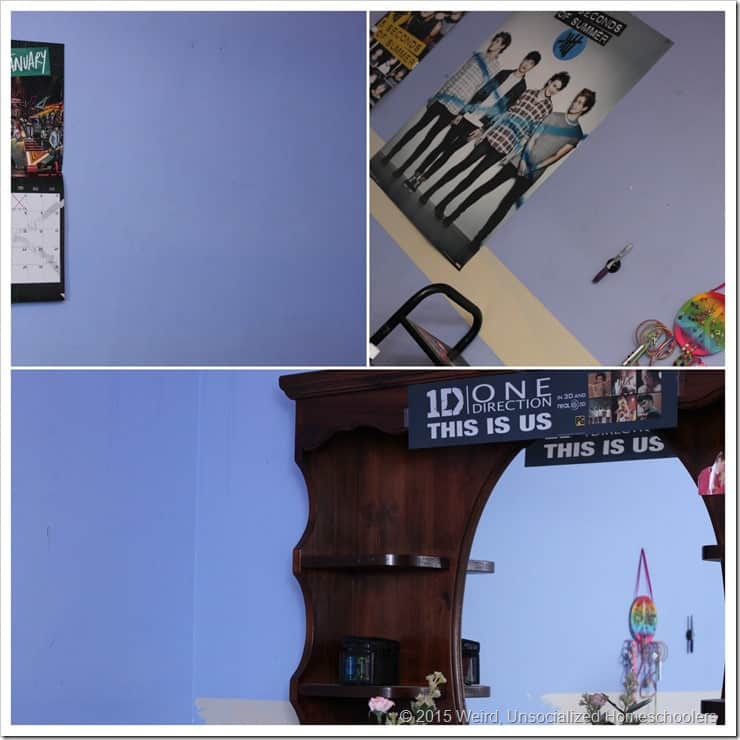 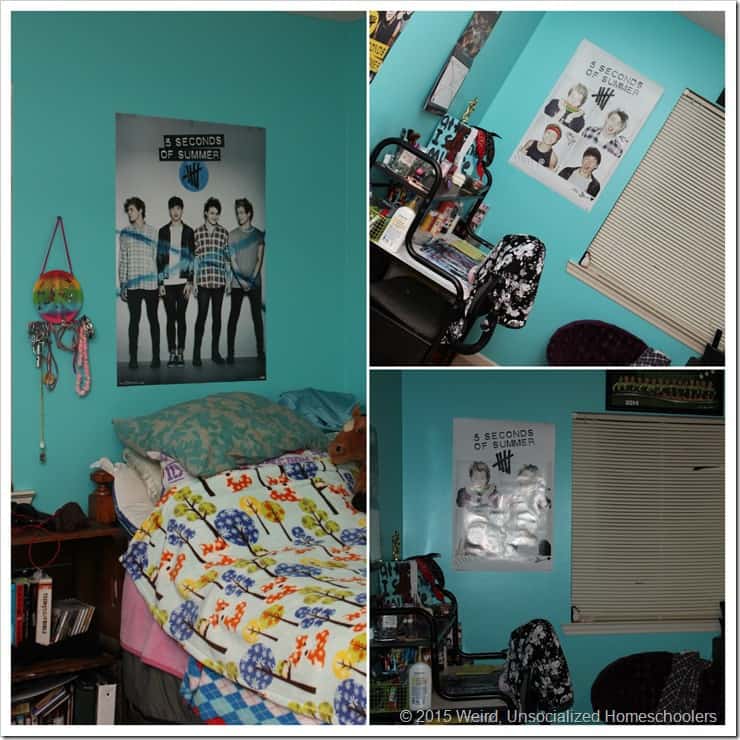 I confess that I didn’t think I was going to like the color she chose, but it turned out much better than I expected.

And, of course, in addition to painting this week, we’ve also spent time trying to keep warm. It got down to 8 degrees Fahrenheit Wednesday night with more of the same last night. That is so stinking cold!

All the outside creatures are inside. The outside dog is in the garage with a heater. The outside kitty is spending nights in the bathroom. She’s not crazy about being cooped up, but it’s got to be better than being outside in the cold.

The indoor/outdoor kitty has thought he wanted to go outside a couple of times, but he quickly changes his mind. Both he and Luna have taken turns sleeping on Brian’s gym bag which, shamefully, has lived in the dining room since last Friday. They’re going to be so disappointed when he goes back to work and takes it with him. 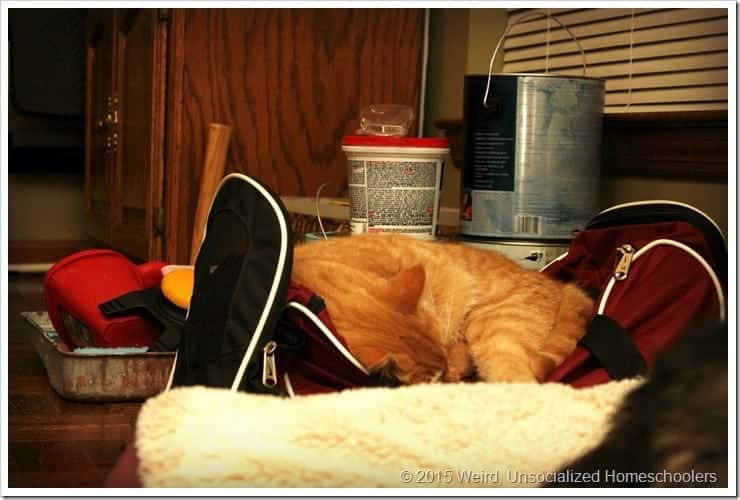 Just for the record, I moved all the paint paraphernalia out of the dining room yesterday afternoon.

Josh and Megan are supposed to go to their first dance tonight. Shhh…don’t tell all those folks who think homeschooled kids don’t do things like that. They’ve both tried on their outfits already, but didn’t let me take pictures yet. Hopefully, I’ll get some tonight. Josh looks so spiffy and Megan has pulled off her tomboy, “I’ll wear a dress, but I’m wearing Converse with it” look quite nicely.

It’s just an informal dance sponsored by our local homeschool group’s mock trial team. I’m not sure Josh will actually go. He’s torn on whether or not he really wants to, so we’ll see. If he doesn’t, I may still make him get dressed up so I can take pictures.

Y’all stay warm if you’re in the path of this Arctic blast, too. I’ll be hanging out by the heater, making lesson plans for next week.