Wow! How can it possibly be Friday again?  It’s been a busy, busy week here.  The biggest thing is that Brian took the week off to build Brianna her own room.  Well, not build it exactly, but partition off part of our playroom to make a bedroom for her.  She and Megan are both very excited.  They’ve shared a room together for the last four years or so.  Brianna is ready to have her own room again and Megan is ready to have her own room for the first time ever.  Hopefully, we’ll have everything done by the first part of next week and have everyone situated in their new digs by next weekend. 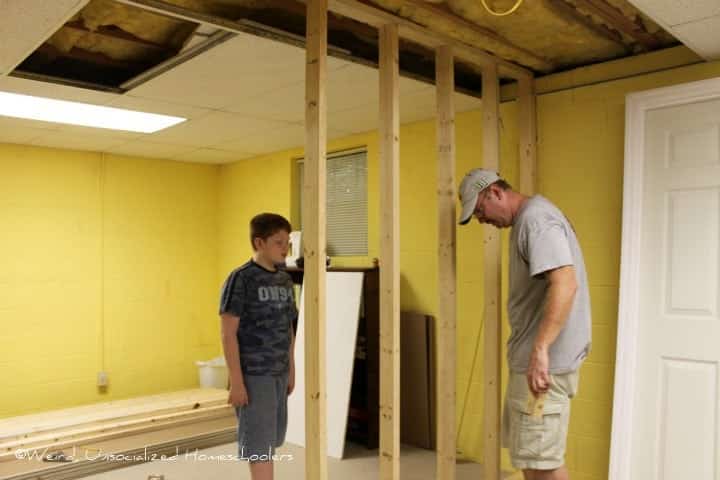 It’s really cool because Josh has been helping…really helping, not just doing things to feel like he’s helping.  Brian let him hang most of the sheet rock.  He got to operate the drill.  Josh loved it!  There was one time he was watching one of his favorite shows on TV and Brian mentioned that he could use Josh’s help, but he could come help after his show went off.  Josh jumped up and said he didn’t really care that much about watching it.  I think it’s been a great father/son time for them. 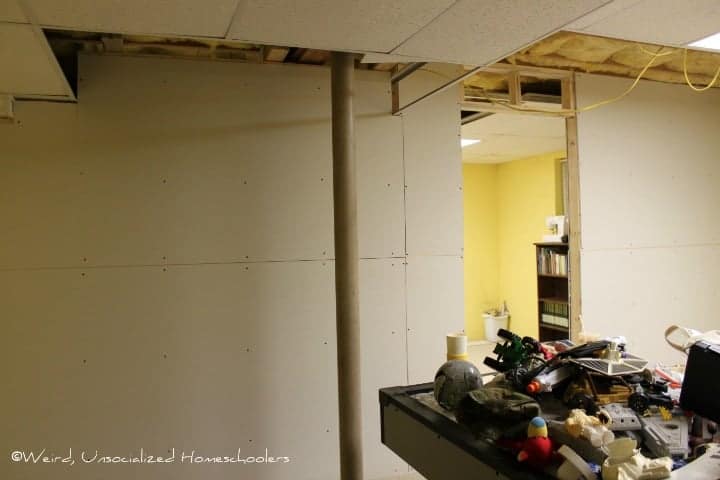 Um, so yeah, all that stuff piled up on the air hockey table is Josh’s Star Wars stuff that we’ve got to find a new home for.  I have no idea where it’s going to go because it’s the bigger stuff that takes up way too much room in his bedroom.  Guess we’ll figure that out later.

So, last Friday night, we moved the school cabinet to it’s new location since it was in the part of the playroom that’s going to be Brianna’s room.  That, of course, meant that everything had to be taken out of it first.  And, of course, if we’re going to take everything out of it, I’m going to sort, cull, and organize.  So, I wound up removing about five years’ worth of papers (times three kids) from page protectors so that I could recycle the papers and reuse the page protectors.  It was probably about five pounds of page protectors. 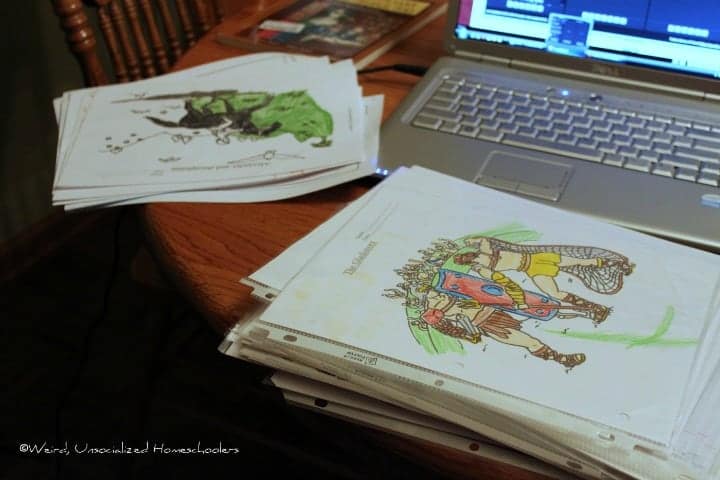 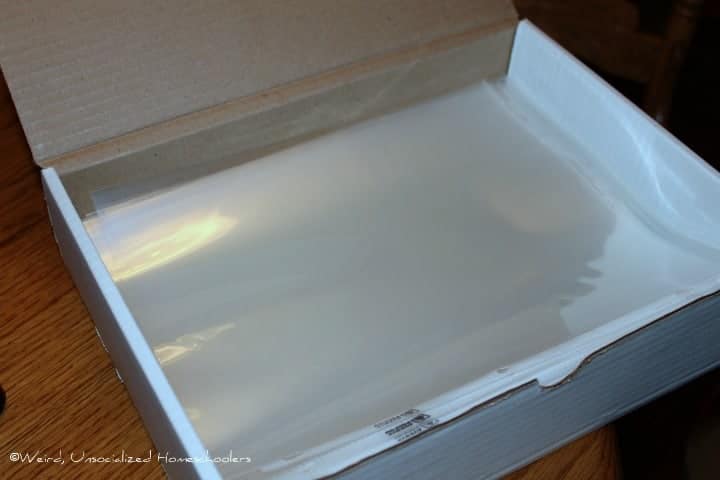 It felt good to get that done, though, and it will save me some money over the next couple of years on page protectors.  Then, while I was feeling industrious, I made the art storage caddy that I mentioned last week.  I got the idea from Jamie.  I was very pleased with how it turned out. 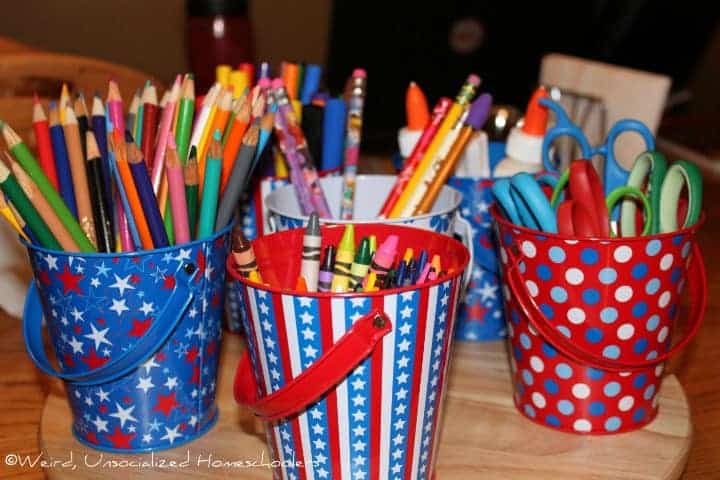 I did have to use three magnets under each tin because the magnets I got were pretty small.  I’m thinking I’ll probably change the tins out every so often.  They’re only $1 at Target and they have some really cute ones for the different seasons and holidays.

The second big thing was that Brian, Brianna, and I went to see the midnight premiere of Eclipse, the third movie in the Twilight Saga.  Loved it!  Can’t wait to go see it again.  It was my goal to lose 50 lbs. by the premiere.  I lost 55!  I am very proud and excited about my accomplishment.  Now, I’ve just got to dig in and get the next 39 lbs. off.  I hope to do that by Thanksgiving.

Josh and Megan spent the night with my dad and step-mom while we went to the premiere.  Have you seen those things advertised on TV that you’re supposed to be able to put in your yard to keep unwanted pests away?  It supposedly emits a high-pitched sound that keeps dogs, cats, squirrels, and other animals away.  Well, I think my dad and step-mom have one that works in reverse, because, if there is a stray dog or cat within a 30 mile radius, it’s going to find its way to their house.

We hadn’t been there long when the girls called me outside to see this stray orange tabby kitten.  It’s common knowledge at my house that I already have my “empty nest pets” planned out: an orange tabby kitten and a brindle boxer.  Of course, I’m a good ten years or so from having an empty nest, so I wasn’t especially interested.  It didn’t take long, though.  It was the sweetest kitten.  The kid lugged it around all over the place and it did nothing but purr.

You probably already see where this is going, so I’ll just get to the point.  Meet Gus: 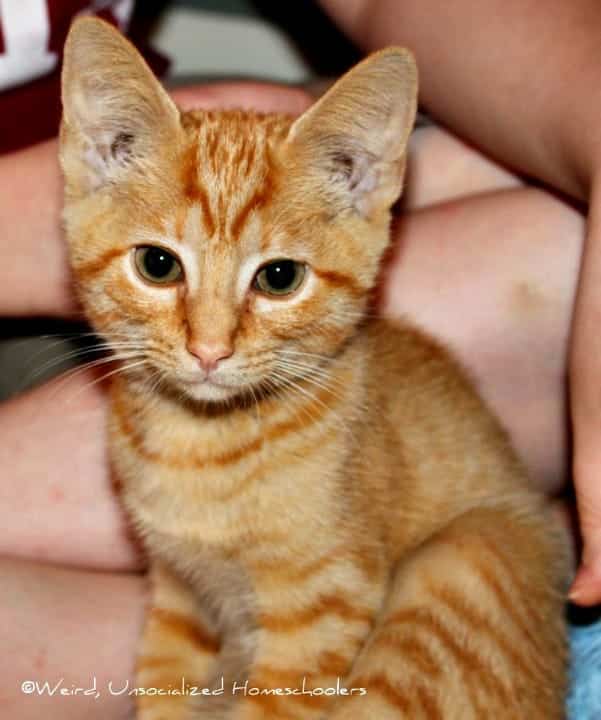 At least I think that’s his name.  Megan doesn’t like it (the name — she loves the kitten), but I think everyone else does.  I guess I should give her some say so, since she’s a big part of the reason we brought him home.  See, Brian said no…then, Megan cried for a solid 45 minutes.  She didn’t beg, plead, or act ugly.  She didn’t even make a big deal out of crying.  She just sat in the back seat, on our way home, quietly snubbing.  Deep down, Brian’s a softy.  We went back and got the cat.  We, of course, need another pet like we need a hole in the head, but he is seriously one of the best-natured cats I’ve ever seen.  We couldn’t resist. Here’s where Gus likes to spend his time: 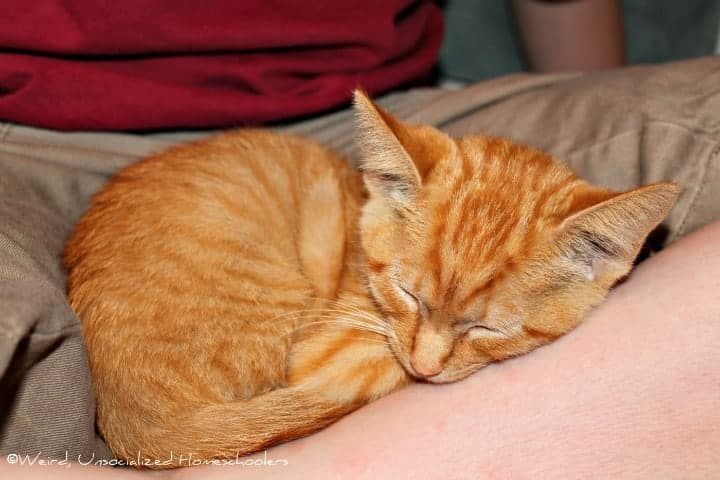 It doesn’t have to be Josh’s lap.  Any lap will do, though he is getting a little braver and more curious about the house.  Our biggest hurdle over the next few weeks will just be to get the inside dogs and Gus to accept each other.  I think the dogs would have been okay if Gus hadn’t hissed and spit at them, which kind of surprised me since my dad and step-mom have an inside dog that the kitten was around when he was over there.  It didn’t surprise Penny, though; it made her mad.  So now, Penny dislikes the kitten and Peanut is terrified of him.  Yes, we think Peanut is part chicken.

I’m hoping that it won’t take them long to decide that they can get along.  I’d kind of like things to be back to normal before we start school in August so that Gus, who I’m guessing is about 12 weeks old, isn’t any more of a distraction than he already will be.

Speaking of starting school, be working on your “next year’s curriculum” posts.  Last year’s themed Weekly Wrap-Up, in which we all shared what curricula we’d be using next year, was very popular.  I thought we could do it again this year on Friday, July 23.  So mark your calendars for the Weekly Wrap-Up: 2010-2011 Curriculum edition!

How was your week? Be sure to post about it and sign up with MckLinky. If this is your first time to join us, be sure to read the Weekly Wrap-Up guidelines.