It has been a fun, crazy, busy, incredible week.  I didn’t get home from Relevant until almost midnight Sunday night, thanks to two traffic jams on my way home.  Other than being late, though, the trip was an easy, uneventful, and – most importantly – safe one. 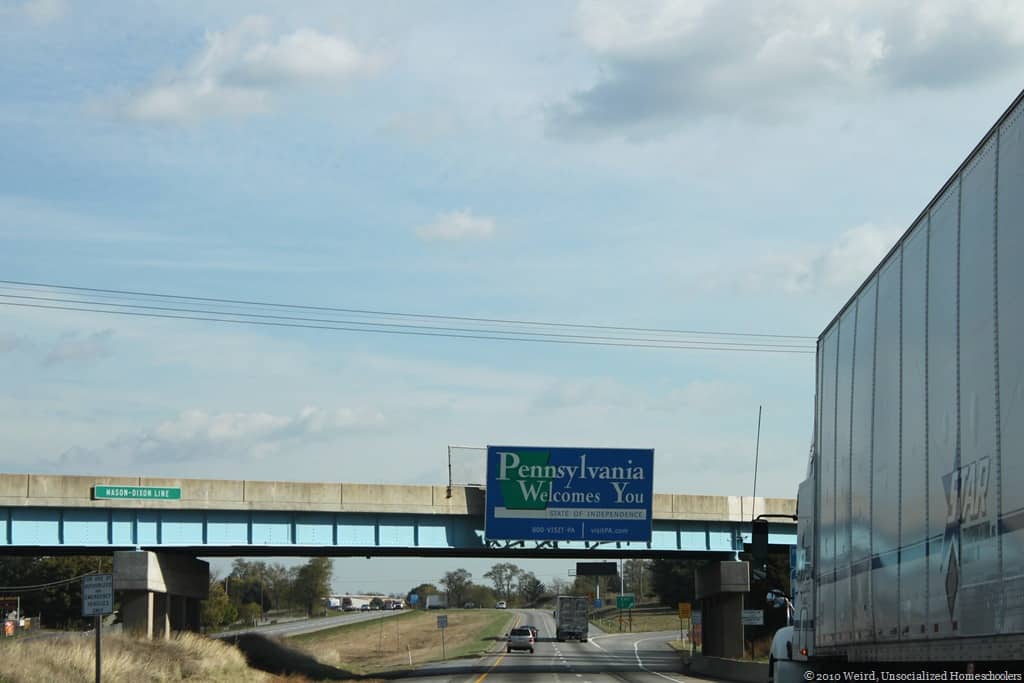 Relevant was a God thing, from start to finish.  I seriously thought about posting about it here, but I tend to get wordy because of the way that God took care of every single detail, so I think I’ll save that for its own post one day next week.  For now, I’ll stick with the highlights of our school week, which was crazy in and of itself.

Monday, I hadn’t planned to do much since I got in so late Sunday night, but Brianna does have her Spanish class on Mondays, which goes on whether we take off or not.  Brian was off, so we went to – where else? – Chick-fil-A for lunch since there was no food in the house, then, we went grocery shopping during Brianna’s class.  The rest of the evening, thankfully, was empty, so we got to enjoy some relaxing family time.

Tuesday, Josh and Brianna were able to take part in a gun safety class with some homeschool friends.  They both thoroughly enjoyed the class, but Josh has talked of little else since.  If we lived closer to my mom and step-dad, Charlie (my step-dad) would probably have an extremely willing hunting partner whether he would want one or not.  I will say, it’s fun to watch Josh target shoot; he’s a very good shot.  What’s not fun is hearing my ten-year-old baby talking about wanting to pursue a career in the military.  *sigh*

While the older kids were hanging out with their friends, Megan and I enjoyed some one-on-one time at a nearby McDonald’s.  You’ve gotta love their $1 menu, what with its sweet tea for me and sundaes for the kids.

Wednesday was Megan’s music class and our first day back to a more regular-looking school day.  Of course, there wasn’t much time to get used to that because we had a field trip on Thursday.  It was actually our second time to see replicas of Columbus’ ships, the Nina and the Pinta. 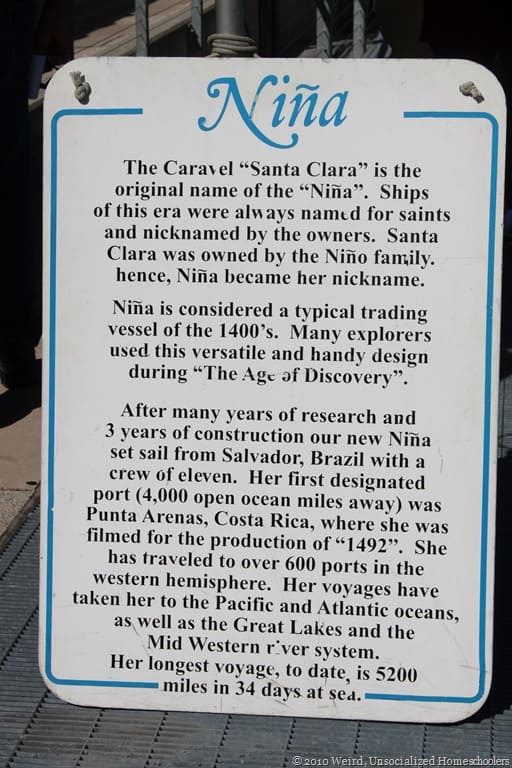 Each time I’ve seen them, I’ve been amazed at how small the ships actually are.  There is no way I’d have crossed an uncharted ocean in one of those things!  Oh, and the one pictured below, the Nina, is actually 50% larger than scale, while the Pinta is an exact, to-scale replica. 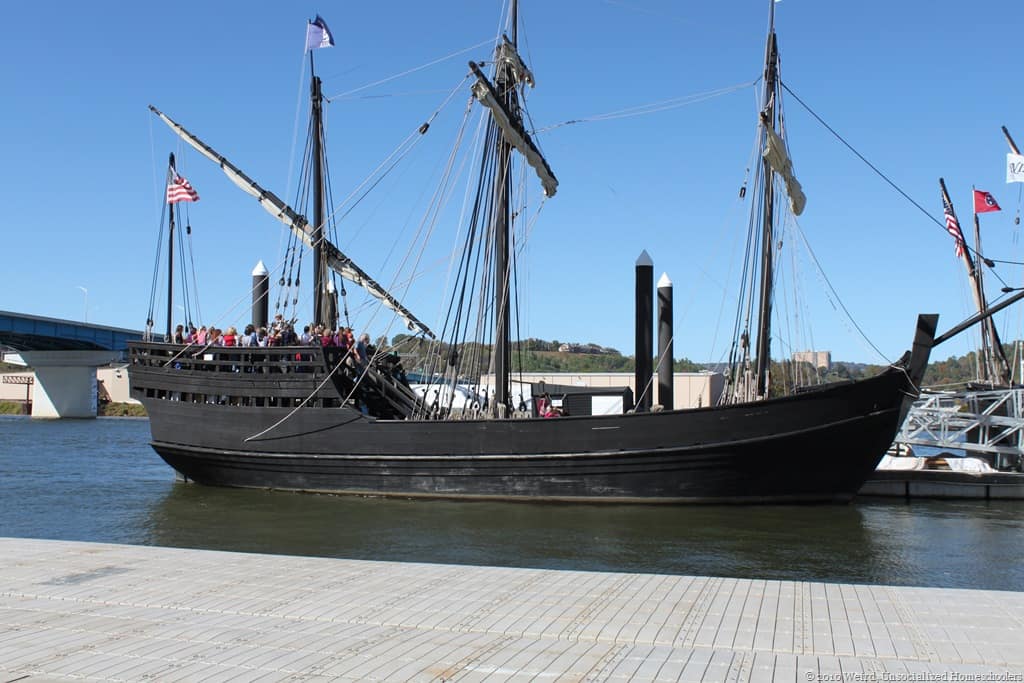 Ever heard the expression “cut and run”?  Our tour guide told us the origin of the expression.  First, he demonstrated the windlass, which is something of a lever device used to pull up the anchor.  The whole process was done by hand, however, and it could take 5-7 hours to reel in the anchor.  If  ship was caught in a storm, there might not be time to pull the anchor up, so the crew would just cut the anchor and sail away.

Columbus left port with 18 anchors and returned with two.  Many anchors were just left at the bottom of the ocean around the coast of Africa.  The anchor pictured below, circa 1600’s, was recovered by a diving crew and donated to the Nina and Pinta restoration crew for their ship. 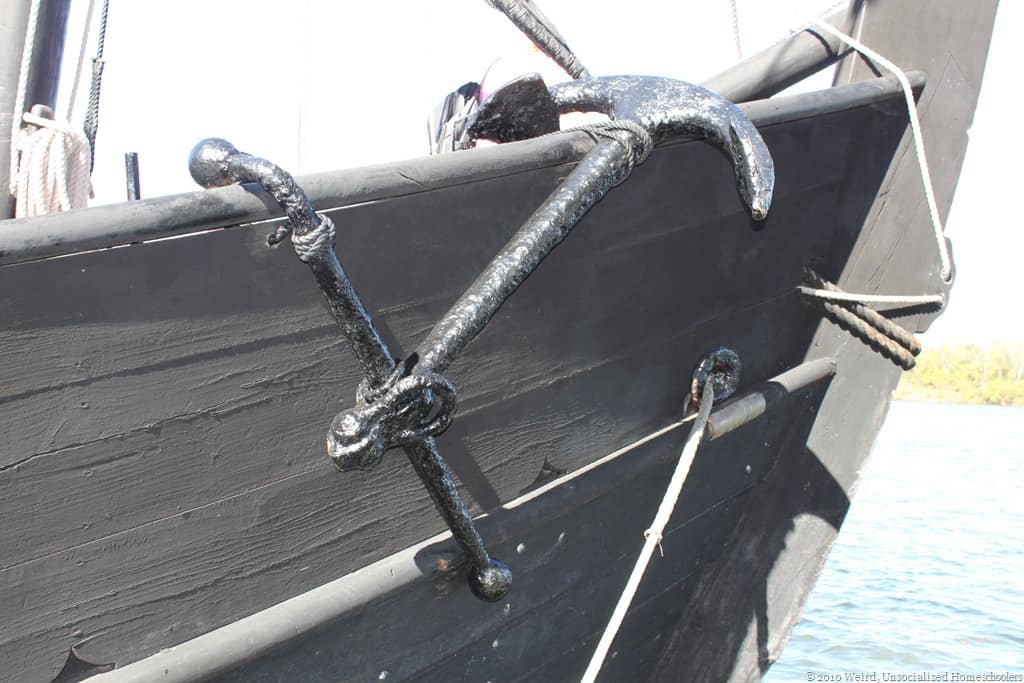 You’ve probably noticed that the Weekly Wrap-Up is posted really early today.  That’s because we’re taking today pretty easy and regrouping after a crazy week.  The kids will be covering the basics and I’ll be doing lesson plans so that we’re ready to hit the ground running next week.  It’s hard to believe that planning for three weeks will put us right at Thanksgiving.  Where has the school year gone?