This post is for all of who you’ve just been sitting around thinking, “Gee, I wonder what’s going on in Kris’s mind.” Okay, so that’s probably no one, not even my own mother, but now at least a few of you are curious.

1. Apostrophes. I consider myself something of a grammar nut. I won the 7th grade English award back in the day – that means I had the highest grade in English in my entire 7th grade class.

Still, I often wonder about apostrophes after names that end in “s.” You know, like mine. You don’t add an “s” after the apostrophe to show possession in words that end in “s,” like “all the boys’ socks” or “all the girls’ dolls,” but what about names? Is it Kris’ mind or Kris’s mind? That always confuses me. 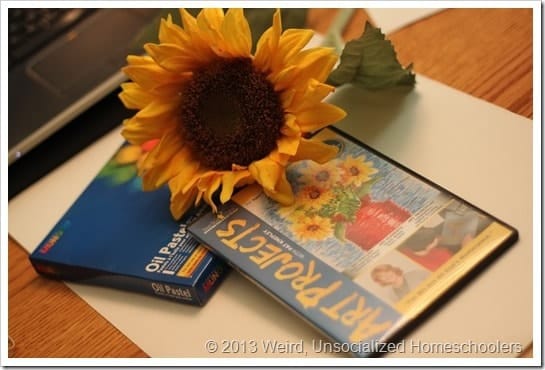 2. Sunflowers. They’re my favorites. Every year, I buy a sunflower calendar for my kitchen and I love when Brian brings me fresh sunflowers.

We needed an artificial sunflower for our current Art Projects DVD, so I decided I’d go to Michael’s and buy a nice one. It was kind of pricey, but it’s so pretty that I decided to buy some more when I found out they were on sale for 40%. Now, I have a beautiful arrangement of silk sunflowers.

I told Brian he still has to buy me real ones from time to time.

The thought of both of those workshops makes me very nervous. There’s probably a reason why I’m a writer and not a speaker. Think I could get away with writing a really good blog post for each and reading it aloud? Yeah, probably not.

4. Engrossing books. It’s been a long time since I’ve gotten really engrossed in a good book, but right I’m reading The Best of Me, by Nicholas Sparks. I’m not sure why it’s captured my interest so quickly, but it’s taking all the restraint I have to write this blog post instead of sticking my nose in that book and not coming up for air until I read the last page. 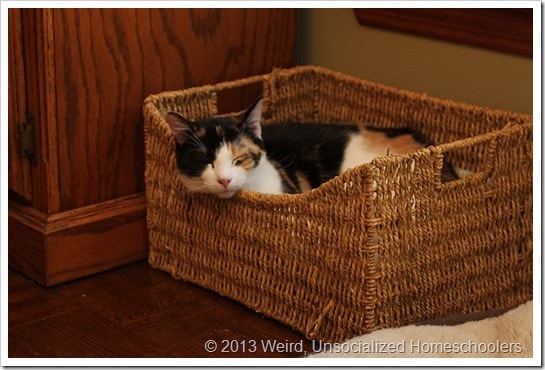 5. Cats. I’ve been wondering what would happen if I talked to people like I talked to my cat. At the very least, I’d probably get punched in the nose. Half the time, instead of calling them by name, I refer to them as “The Fat One” (Luna) and “The Crazy One” (Lily).

A few weeks ago, I said to Luna (in that sweet little sing-song voice that always makes dogs and cats think you’re saying something sweet, even if you’re not), “Hey, little fatty kitty. You’re so fat if I didn’t know better I’d think you were pregnant.”

See? I’d get punched if I said that to a person.

6. Melatonin. I love melatonin. It’s great for shutting my mind off and helping me sleep when I’m suffering from insomnia and it never makes me feel groggy the next day. I think I can only take it in small doses, though.

I had a bottle of 1 mg melatonin and several people mentioned how little that was, saying that they buy 3 mg. So, since my bottle was almost empty, I bought a bottle of 3 mg pills. I took one last night…and tossed and turned all night long after also sleeping poorly the night before.

Today I realized that the same thing has happened the couple of times I’ve taken two 1 mg pills because I expected to have trouble sleeping. Do any of you melatonin-takers notice it having the opposite effect if you take higher doses?

7. Sleep. Speaking of melatonin, I have to tell you – I have sleep issues. It usually takes me at least 15 minutes – and usually longer – to go to sleep. Of course, I’m married to a man who takes less than 3 minutes to fall asleep. And who snores. Loudly.

I can usually stay asleep once I’m in a deep sleep, but I am very easily awakened until then. And, if I am awakened during the “drifting off” phase, it sometimes takes me hours to go back to sleep.

8. Lunches. I usually try to have some variety in my lunches, so I don’t get bored with my favorites, but sometimes I get on a kick. Right now it’s sandwiches. I do try to have different kinds of sandwiches, but for the past several weeks (since the kids went to camp back in June), I’ve been perfectly content to have sandwiches nearly every day for lunch, with the occasional plate of leftovers thrown in for variety.

I think it’s because sandwiches are quick and easy. I’m still fixing other things for the kids, but it’s usually something easy that I can toss in the oven, like pizza. I’ve been on tuna for awhile, but this week I got some roast beef and honey ham from the deli counter. What do you do for lunches?

9. Falling Skies. Do you watch it? That and Revolution are the only two TV shows that I watch regularly. It helps that Falling Skies is only shown during the summer and Revolution is a fall/winter show because I don’t like watching a lot of TV. I have trouble keeping them separate in my mind, sometimes, though…and both are getting on my nerves a little bit.

10. School. I’m really excited about our new school year. Sunday afternoon I was working on updating our curriculum page. I’m planning on having the new-and-improved, updated page ready to roll out on Thursday. So far, there are some things that are really working well for us – one is a curriculum tweak and the other is even more simple…assignment sheets for my middle schoolers.

They love them! I’ve tried them before with little success. I’m not sure what the difference is now, unless it’s just the fact that the kids are older.  That one change has really made our day go much more smoothly, though, making all of us very happy.

What kind of randomness is on your mind this lovely Tuesday?

This post is linked to Top 10 Tuesday and iHN’s Ten in Ten.