This week’s iHomeschool Network 10-in-10 series theme could get scary. Ten random things on my mind? There’s no telling where this might lead.

1. I am really impressed with Lexercise. I know it’s been less than a week, but I’m so excited about the possibilities for Josh’s reading improvement with this online therapy. The games that he plays, at this point, only take about 10 minutes, so he’s getting daily practice in specific skills without being overwhelmed.

On top of that, I get an email telling me what we need to work on, based on his mistakes, literally within seconds of him logging off.

2. I’m posting at The Kennedy Adventures today. I know I said that last week, but I really am posting there this week. I hope you’ll visit and read my article, Becoming a Healthier Homeschool Mom.

3. Last night, I made the niftiest little craft project. Since the kids and I have been using the SOAP method of Bible study each morning, they’ve needed pencils before getting out their binders which contain their handy-dandy pencil pouches.

That means that everyone is getting up and scrounging for pencils from the jar in the kitchen, which may or may not actually contain a pencil since the person who got out the pencils the last time they were used may or may not have put them back. I’ll let you ponder the probability of that for a minute.

So, I decided that I needed a pencil jar on the table. I went and dug through the glass recycling box and found a pretty little Marzetti jar (from their wonderfully delicious pepperoncini). I stared to just wash it out and use it, as is, then I remembered how much fun Megan and I had with our little Modge Podge project recently.

So, while Megan worked on long division (horrible stuff), I made this: 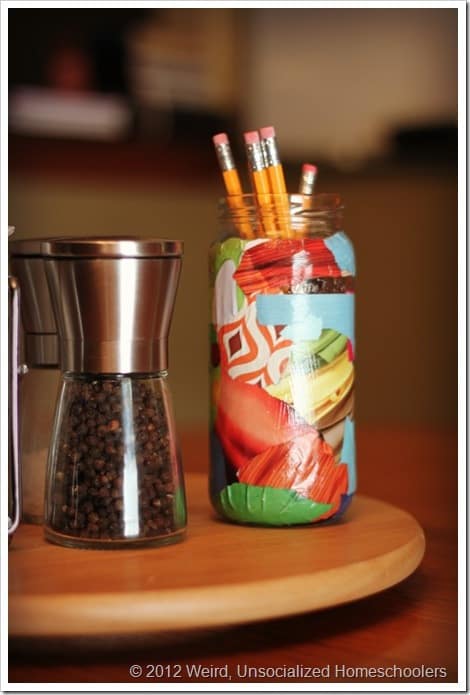 4. Our local curriculum fair is coming up on Friday. I am so excited! I always enjoy going because it’s a great chance to catch up with my homeschool friends and ooh and ahh over sparkly-new books. This year should be extra fun because Brianna is going with me to help decide what curriculum she’ll be using this year.

5. I am so impressed with All About Spelling. We’ve used All About Spelling off and on for about two years. The therapist from Lexercise who evaluated Josh told me that he needed explicit spelling instruction to overcome the phonological delays that he is experiencing because if his dyslexia.

If you know anything about dyslexia, you probably know that Orton-Gillingham is one of the most highly-regarded instructional approaches for people with dyslexia. In light of that, I was considering two different spelling programs for next year, one of them being All About Spelling.

I asked our clinician if she would mind giving her opinion of the two. Having previously worked in a public school setting, she wasn’t familiar with either, but after looking at them, she told me that All About Spelling looked like it was straight from Orton Gillingham, which is something that they emphasize on their site.

I was so impressed that someone who is really familiar with Orton Gillingham could confirm that for me. So, since we’ve used and enjoyed AAS before, we are back to it again, for the long haul.

6. I’m writing our sponsored child tonight. We sponsor Nathan, in Kenya, through Compassion International. I’m writing him tonight and sending him some Pick and Draw cards to play with.

We get so excited when he writes back. When we discover a letter from him in the mailbox, everything stops. Everyone drops what they’re doing and comes to hear the letter read aloud. We have been so blessed by Nathan.

7. Sometimes we need a reminder. I love my youngest. I wouldn’t take anything in the world for her. She is so loving and encouraging. She’s my “words of affirmation” kid. Yesterday, however, was one of those days when I had to remind myself that she does not drive me crazy. Her behavior can be frustrating, but she is amazing and beautiful, talented and loving.

I’m not a saint. I’m not above needing to re-read that post a time or two…but I am eternally grateful that God spoke those words to me and that I can remind myself of them, rather than continuing down a path of negativity. 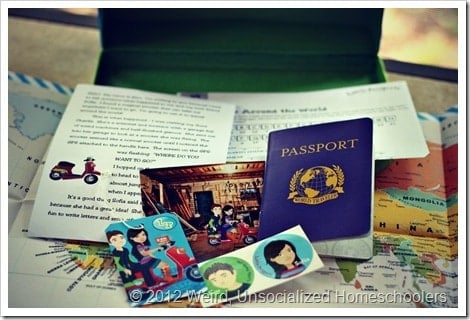 8. We’re enjoying Little Passports. So, I had this vision of Megan getting so excited about learning about the countries about which we get Little Passports packages that she would devour whatever information she could get her hands on about them.

Um, yeah, right. She loves that goodies, but she’s not exactly been beating down a path to the library books to read about their country of origin. So today, we needed something to fill the 20 minutes she had until time for some new episode of a TV show she wanted to watch. I suggested that she read one of the library books about Brazil.

She didn’t want to, so I threatened gently suggested that if all she wanted to do with Little Passports was get the goodies and play the games, maybe I wouldn’t continue the subscription. She decided that maybe she’d read a little bit.

She spent the next twenty minutes saying, “Hey, Mom, did you know…” and “Oh, listen! This is so cool!”

So, there. Round One goes to Mom. Maybe even Round Two since, when I said, “See? Wasn’t that interesting?” she replied, “Why are you always right?”

9. Reading Horizons. We slacked off on Reading Horizons over the summer, but we’ve picked back up now that we’re back to school. It’s pretty cool. Josh has gotten past the first chapter, so he’s unlocked the library. He had to take an assessment to determine his reading level, so that all the books that he reads online are at his level.

It’s been great practice at with some high-interest stories that aren’t at the “frustration level” for him. It’s been a nice complement to what he’s doing with Lexercise.

10. I miss running. It’s been so hot lately, even in the mornings, and my running buddy has had some other commitments, so my accountability has been missing and I haven’t been running much lately. I’ve run a time or two on the treadmill, but that’s not much fun. So, now, I’m missing running. I might be missing it enough to get up super-early (so not my thing) and go one morning this week before it gets too hot.

Those are the random things on my mind. What’s on yours?

This post is linked to iHomeschool Network’s 10-in-10 series and Top Ten Tuesday.