For many of us bibliophiles, our addiction is not limited to books alone, but spreads to the printed word in general, which means that we can quickly find ourselves with an overabundance of magazines lying around the house. 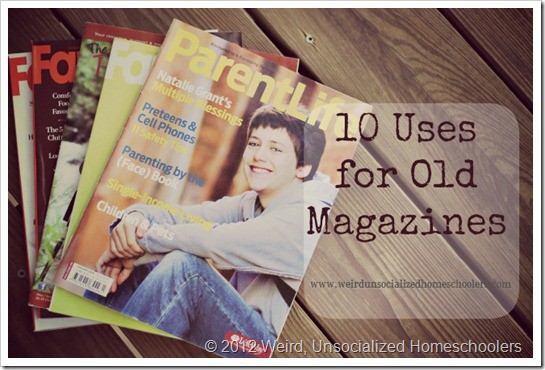 Finding uses for old magazines, however, can be fairly simple. Some of my favorites include:

1. Mod Podge. Both my girls and I have become huge fans of making unique containers with old magazines, a little Mod Podge, and recycled jars or canisters. 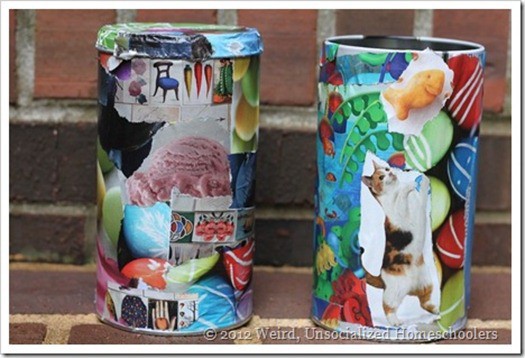 2. Write stories about the scenes. When my kids were younger, I used to keep a file folder full of interesting pictures I’d cut from magazines to use as story starters. Often it’s easier for a child to write when he has a something interesting to write about without having to come up with an idea off the top of their heads.

3. Complete the picture artwork. I’ve seen some great artwork created by cutting half of a magazine photo in half and having students complete the other half. We’ve not done this, but it’s been on my mental to-do list for years.

4. Make a collage. The collage doesn’t even have to serve a purpose – it’s just fun! We’ve done color collages where we just used a certain color or animal or people collages. You could have a theme based on something you’re learning or you could create scenes.

The finished products would make a great base for a card of encouragement to a friend, relative, or nursing home resident.

5. Make an ABC book. When my niece homeschooled preschool with us, we had a great time making a homemade ABC book. To make the process less overwhelming for her, I would give her a stack of pre-cut pictures, making sure that the stack contained pictures of objects that started with that day’s letter and a few that did not.

6. Make a number book. My niece and I also made a homemade numbers book. I would pre-cut pictures containing one to ten of the same object. It got a little trickier after ten. Photos of coins or flowers saved the day a couple of times. 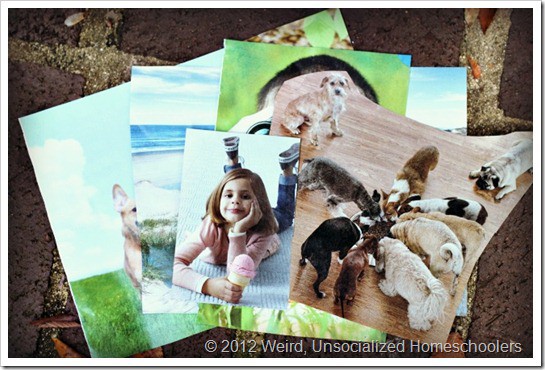 8. Write a descriptive paragraph. Josh is currently using WriteShop I and this week’s assignment is writing a paragraph describing a person. He’s supposed to practice making observations about facial features using magazine photos. This could easily be employed describing objects or scenes

9. Take them to a waiting room or nursing home. I have this weird idiosyncrasy when it comes to magazines. I can’t stand folding the covers back or dog-earing the pages. I use the little postage paid postcards inside to mark my place.

All that just means that my magazines generally still look brand-new when I’m finished. If you’ve got like-new or gently-used magazines, consider donating them to a doctor’s or dentist’s office, hospital waiting room, or nursing home.

10. Make a learning tool. We once coupled magazine photos with a small, plastic photo book to make a simple learning tool to help the kids memorize prepositions.

What practical uses have you found for old magazines?