Dyslexia means that you see letters and words backward.

That’s a common misconception. That can be a symptom of dyslexia, but it may not be present, and it’s far from being the primary symptom. With one child who has been officially diagnosed and another who has been mom-diagnosed, there are several signs of dyslexia that would have given me a heads-up when they were younger, had I known what to look for. 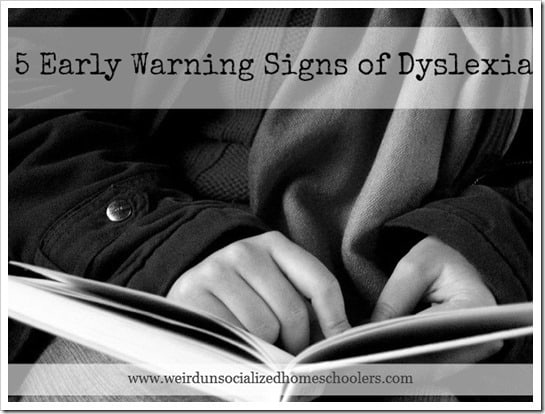 I never used to understand why my two dyslexic kids could not get the concept of rhyming words. It’s just that their dyslexic brains process information differently. The best way I can describe it is that they just don’t “hear” the rhymes.

When Josh was younger, he had a very difficult time remembering things like names, words, and letter names. I often thought that one of his biggest barriers to reading fluency was being unable to call up the word that I could tell was just right there on the tip of his tongue.

When he had his dyslexia evaluation, there was a naming test where he was shown a huge variety of objects and was supposed to say the name of each. I was watching him. There was this one object that I could see from the look on his face he knew, but he just could not remember. It was very frustrating.

Later, he remembered the word he’s been trying to say. He said, “I knew what it was. I just couldn’t remember what it was called.”

Even when a dyslexic kid learns all the letter sounds, he can still have difficulty blending the words together (and often does). He may sound out all of the letters correctly and then name an entirely unrelated word. He may also call a word by a synonym, such as house instead of home.

I can’t tell you how many times my dyslexic kids would write on the wrong side of the paper due to the difficulty telling the difference between left and right. Honestly, this is something that my non-dyslexic child did, too, but it was more persistent with the dyslexic ones.

Directional problems often persist for dyslexics into adulthood. This has nothing to do with intelligence or lack thereof. It’s just the way a dyslexic brain is wired.

Some dyslexics have difficulty telling time on a clock with hands. Granted, in this digital age, that may also be true of a lot of kids, but it is especially true of dyslexic kids.

Aside from b and d, neither of my kids reverse letters or transpose words. Dyslexia can look distinctly different from one person to the next, but all of the symptoms I’ve listed are signs that I noticed in my kids. I wish I’d known more about the signs and symptoms of dyslexia so that I could, potentially, have caught it and sought treatment earlier.

Do you have a dyslexic child? What signs did you notice?