If you’re a blogger and you’ve been blogging awhile, you may have had one of those moments where you think of a great idea for a post – then, you can’t remember if maybe you posted that very same idea last month.

Or maybe you just have to be of a certain age for that to happen to you.

At any rate, I searched through 8 pages of old blog posts and can’t find a single one in which I have shared quick and easy breakfast ideas. That is, most likely, because until recently we never ate breakfast during the week. 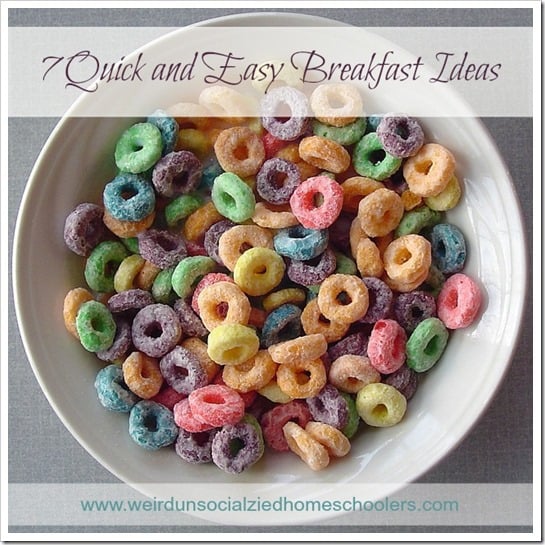 Yeah, I know it’s the most important meal of the day and all that stuff, but when you don’t like to eat upon first waking and you don’t get up until nearly lunch time, you might as well just skip the traditional breakfast and break your fast with lunch foods.

And, of course, since last week, Brianna has been getting up early to head off to cosmetology school. That means it’s time to start making sure there are breakfast foods in the house.

That means I’m long overdue to share our favorite quick and easy breakfast foods. Just because we rarely make them doesn’t mean we don’t have them.

Baked oatmeal is probably our very favorite breakfast food. Megan is the only one who doesn’t like it, but she doesn’t like any other breakfast foods either (except Chick-Fil-A Chick-n-Minis and hash browns, which are, essentially, just chicken nuggets and fries). We’ve tried a few baked oatmeal recipes, trying to come up with a healthier version, but our hands-down, all-time favorite is not-so-healthy, but super-yummy Money Saving Mom’s baked oatmeal recipe.

I like to make a pan on Sunday so that whoever wants it can heat up a bowl during the week.

I haven’t made monkey bread in a long, long time, but it’s going back on the rotation now that we’re eating breakfast again. Everyone loves it! (Just for the record, Megan is not included in everyone when discussing breakfast foods.) It’s super-easy to put together the night before, too. Then, you can just pop it in the oven for a hot, delicious breakfast.

When I say fruit salad, I am not talking about the canned stuff. Yuck! I’m talking about a simple, fresh fruit salad recipe that my cousin shared with me. I pretty much just toss in whatever fruit we have. It always includes apples of some sort and I try to keep a jar of mandarin oranges on hand since that keeps the apples from turning brown.

The homemade fruit salad is good plain, but I like to add a scoop of vanilla yogurt and a sprinkle of granola.

I try to keep a few containers of yogurt in the fridge. Vanilla and strawberry are our staples. I’m considering getting brave and trying my hand at making my own. I like yogurt by itself, but I’m also fond of loaded yogurt, which usually involves tossing in some sort of fruit and a little granola for crunch.

Non-loaded yogurt is not a bad choice either and is, in fact, one of the few breakfast-type foods eaten by my anti-breakfast girl.

I’m not too crazy about convenience foods for breakfast, but the kids sometimes like them. Their favorites are:

Yesterday was the first time that Briana hasn’t eaten baked oatmeal before going to school. I bought some of her favorite convenience foods so she wouldn’t get burned out on the oatmeal. She’s been working through her lunch break because she hasn’t been hungry. She texted me yesterday afternoon to say she wished she’d brought something for lunch. Those convenience foods may be quick and easy, but they’re not filling like baked oatmeal.

Josh and Brianna are both very adept at making scrambled eggs and omelets. Sometimes they’ll make their own for a quick breakfast or snack. I also will sometimes boil eggs the night before to have in the fridge for breakfast.

And, of course, there is plain old fruit. Apples, oranges, or bananas with a spoonful of peanut butter, a side of toast, or a piece of string cheese make a super-easy breakfast on even the busiest of mornings.

What are some of your favorite quick and easy breakfasts? 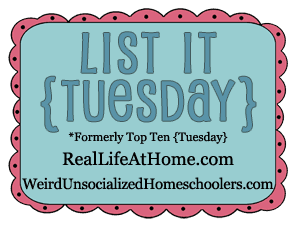