It’s been awhile since I’ve written a job résumé. I’m not sure what the current buzzwords are, but back then “attention to detail” was a big one. I included it on my résumé. I shouldn’t have. I might like to think that I have good attention to detail, but the fact is, I’m a big picture kind of girl.

I can have attention to detail, but it doesn’t come naturally to me. On those rare occasions when Brian helps me clean house (and I’m not complaining – the man does work to support a family of five), he tends to do things like dust the light fixtures or polish cabinet knobs – things I never do. Meanwhile, I’m dusting or vacuuming. Big picture stuff.

All that to say, my attention to detail may not not noteworthy on a résumé, however it apparently isn’t completely lacking as the following tale illustrates.

Last week, we were getting in the car after having dinner at my sister’s house. Suddenly, there was some sort of commotion behind me. Brian was trying to get my attention because had found an orange tabby cat and my cousin, Megan, was following close behind to see the happy reunion.

(For those who may not remember, my beloved orange tabby cat, Gus, disappeared last November. We haven’t quite given up hope that he’ll show up some day.) 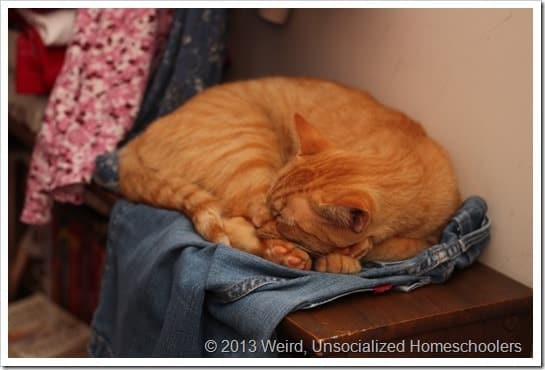 So, Brian was trying to show me this cat, saying he thought it was Gus. I took one look at him and said, “That’s not Gus.”

“Are you sure,” asked Brian. “He came to me when I called him Gus and he’s purring.”

His face wasn’t right, though. It was longer than Gus’ and he was a lighter orange color. Still, Brian and a kid or two kept insisting that maybe it was him and I started thinking maybe his face had changed over the last year. He did seem very happy to see us.

So, I suggested that we look at his belly and see if we could find, under all that orange fur, the green tattoo the the vet put on his belly after he was neutered.

It was that moment when I proved that I do, in fact, have some “attention to details” skills.

“How do you know,” asked several voices simultaneously.

“Because,” I said. “That is an unneutered male.” 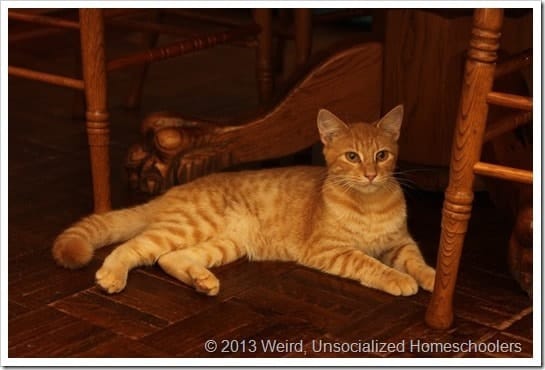 What say you? Can I still put “attention to detail” on my résumé?

Now, for the rest of the story, as Paul Harvey likes to say…

We bid our goodbyes and went home, but Tuesday “Not Gus” showed up at our house. (We live a couple of streets over from my sister.) We played with him a bit outside and he took it upon himself to come inside to visit when we opened the door. He didn’t stay inside long, but hung around outside quite awhile.

He came back yesterday and spent much of the day inside, eating, sleeping, and hanging out with our dogs and cats. He’s quite friendly and acts like he owns the place. I guess we’ll need to put up some “found kitty” signs this weekend before we get too attached. I don’t mind him visiting, if he belongs to someone else, but I don’t want to treat him like he’s ours if he’s has a family somewhere.

Did you ever see the Everybody Loves Raymond episode where Robert got the “stray” bulldog neutered, only to discover that he was a champion show dog? Yeah, I don’t have any illusions that this cat might be a show cat, but still…