It’s been a busy week since just before Christmas. Although I’ve been online most days, I feel out of touch. I’ve spent more time updating my blog’s look, rather than posting (What do you think about the new look. If you don’t like it, don’t tell me! LOL), so I feel out of the loop. I thought I’d take a few minutes to hit the highlights of our Christmas holidays.

As I’ve already mentioned, the kids and I spent some time baking the Tuesday before Christmas. We filled cute little Christmas-themed bowls to send home with extended family: 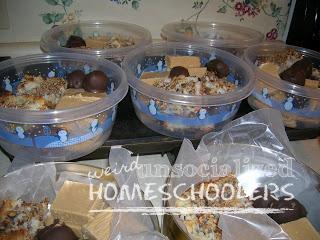 We spent Christmas Eve at my sister’s house with my side of the family. The kid had drawn names for each other and the adults had a “Chinese auction” with white elephant gifts (think: re-gifting). Some of the gifts were serious and some were just funny. I got a great gag gift for next year’s Christmas party with my homeschool group…but I can’t tell you what it was since some of the ladies from my homeschool group read my blog. You’ll just have to wait until next year…but it’s good. 😉

One of the funny gifts was a “Larry, the Cable Guy” doll that tells jokes and says Larry’s famous line, “Git ‘r done” when you squeeze its hand. We all had fun with that, but the funniest moment was when, in a rare and unexpected moment of quiet, Josh, thinking that no one would hear him, said, in his most redneck voice, “Git ‘r done!”

It was hilarious! It was one of those moments when he didn’t expect anyone to hear him, but everyone did and immediately burst out laughing. Josh is really shy, so it embarrassed him (though, I think he still saw the humor in it), but you couldn’t help but laugh.

Christmas morning, we got up and exchanged gifts at home before heading up to the in-laws’ for the day. As we were preparing for the kids to come into the living room to open gifts, I happened to notice that Megan had rearranged the Little People nativity set. I had to take a picture because, while I had the figures set up to display each one nicely, I think Megan’s picture is probably a much better reflection of the Holy night with everyone so anxious to see the new Baby, don’t you? 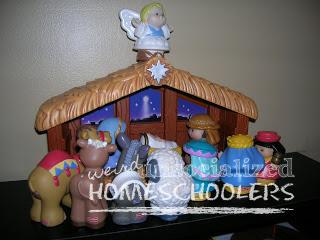 Although we scaled back quite a bit this year, my kids still proclaimed this the “best Christmas ever,” so maybe they’re not as spoiled as I sometimes think they are. As you can see from Josh’s display (which he just had to set up before I could take the picture), it was a Lego Star Wars Christmas for him: 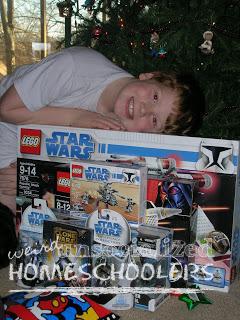 Brianna’s favorite gift was a new iPod, which I had wrapped in three different boxes, nested inside one another so she’d think it was clothes: 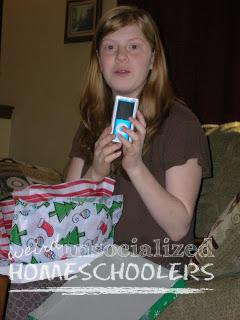 We were so disappointed when the iPod quit working, literally within the first five minutes. We wound up having to take it back the next day because it was completely fried. This was especially aggravating since we had taken the time to have Brian sneak downstairs and load all her songs on it before we wrapped it.

It was working then and we even watched a video on it to see how that worked since the video wouldn’t play on her old iPod. If it had quit working that day (about a week before Christmas), we could have taken it back then and she never would have known. Oh, well. We were able to take it back and the store didn’t give us any hassle about exchanging it.

We gave Brianna’s old iPod to Megan, so Brianna’s gift was kind of a two-for-one. I wish I had a picture of Megan carrying around her iPod with the earbuds in her ears. She makes such a cute picture – like a little, miniature teenager.

Usually I avoid anything that might encourage her to grow up too fast, but the picture of her “rockin’ to her tunes” is really cute. I’ll just have to settle for the following picture, a reflection of Megan’s High School Musical Christmas, including PJ’s and house shoes (Down to the shoes, Fly Lady, down to the shoes): 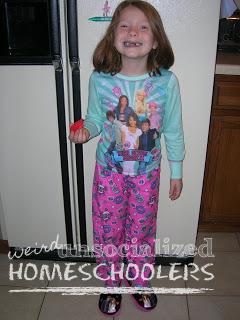 My big gift was my laptop (and, of course, Brian’s was the car, which we have been informed by Megan is the Mustang, not the car), which I got as an early Christmas present back in September. Brian said he couldn’t wrap my gift because I’m on it all the time. True. He did get me a wireless laser mouse for Christmas, which I’m loving. I had about gotten used to the touch pad on the laptop, but the mouse makes it sooooo much easier.

Brian didn’t have to go back to work until Monday, so we had a nice mini-vacation with just each other and Megan, since Brianna and Josh stayed with the in-laws until yesterday. I hope you all had a wonderful holiday season, as well. If you posted about it, feel free to leave the link in your comment, so I can come visit.