Disclaimer: This post has not one single, solitary thing to do with homeschooling. At all. It’s just a fun tidbit from my husband’s and my trip to Disney.

So, by now you know that my husband and I spent last week alone together, sans kids, at Disney. Actually, we stayed on Disney property, but didn’t venture to the Magic Kingdom this go ‘round. This trip was more for relaxing and reconnecting.

We did, however, spend Wednesday, our actual anniversary, at Disney’s Hollywood Studios. It’s the first time we’ve been there since becoming American Idol fans – yeah, we were a little slow to jump on the bandwagon.

So, anyway, one of the things I wanted to do was the American Idol Experience show. We were going to go to the 1:30 show, but missed the start by a few minutes. We were going to hit the next show at 4:00, but we were on the other side of the park when a monsoon hit and we didn’t want to get drenched. 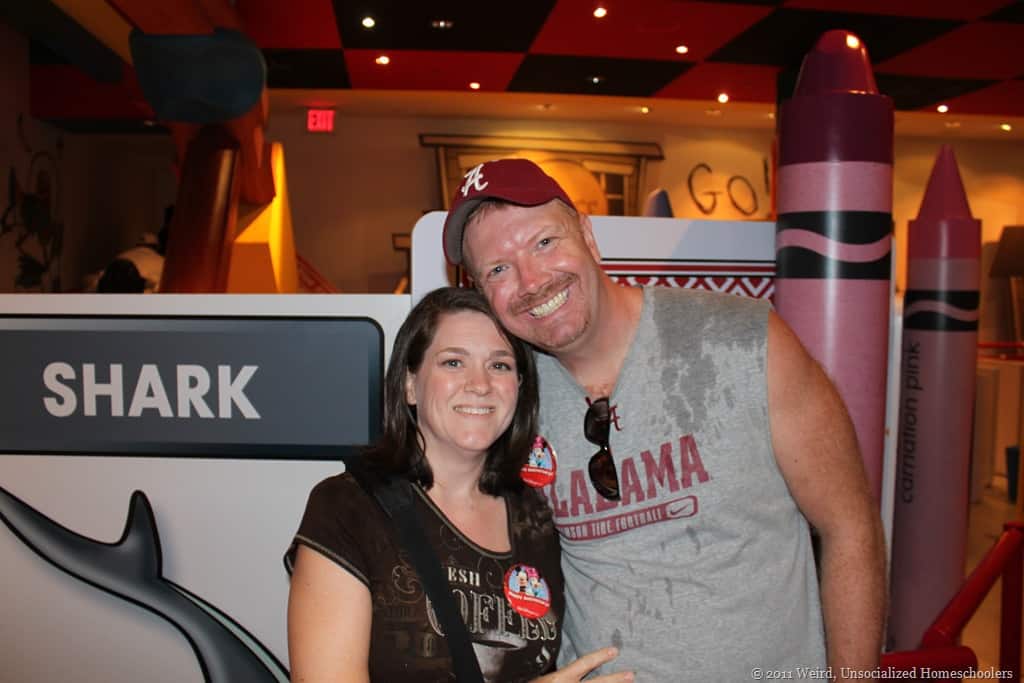 Us slightly drenched anyway because we got tired of waiting for the rain to pass.

The premise is that actual park guests audition for the four or five regular shows during the day. They compete against each during the different shows throughout the day. There were three competitors in the show we saw.

The audience votes for the winner of each show. Then, the four or five winners from throughout the day complete in the grand finale show at 7:00, which is shown on a big screen in the park for those who don’t make it into the audience.

Brian and I both voted for Sarah Garcia, who won the show we were in. After we ate dinner, we stopped outside the theater to see how she fared in the grand finale performance. She won!

Because she was the overall winner, she gets a ticket that lets her go to the front of the line at any actual American Idol audition this next season, which means we may see her competing on the actual show. We found out that that’s how Aaron Kelly from the season before last got his chance to audition.

We both – along with the kids – thought it would be really cool if Sarah Garcia actually makes it onto the next season of American Idol.

Even more coincidental, we ran into her the next day at the resort where we were staying. Brian actually saw her that same night that we got back from Hollywood Studios, but it was late and we were tired, so we didn’t speak to her.

The next night we saw her again and stopped to congratulate her on winning and wish her well in the competition. Maybe we should have gotten her autograph. She might be a star some day.

What are the chances of us winding up in the same American Idol Experience show at Hollywood Studios on the same day that this girl from our same resort competes and wins? Cue the Twilight Zone music.

Just thought that was pretty cool.

Have you ever met someone who later became famous?