A couple of weeks ago, while looking through some old computer back-up discs for something, I found some of the unit studies I used to write for Brianna. Since one of them was on early explorers and next week is Columbus Day, I thought I’d share my outline with you. This is how we used to do school. Considering that I used to put all this together by myself, it’s no wonder I got so burned out. 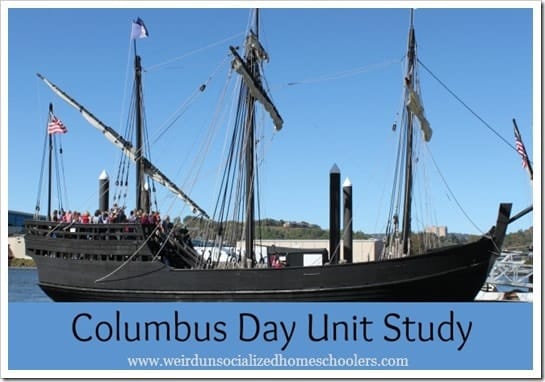 I’m pretty much posting it just like I found it. I did make sure the links still worked, but other than that, it is what it is. I had to take out the entire “Internet Resources” section. None of the links worked anymore.

I’d suggest taking the things that interest you and dumping the rest. Oh, and for what it’s worth, this was written to cover 4-6 weeks and nowadays, I would never, ever attempt to read all those book in that amount of time.

(This was also back when there were only four named oceans. Just for the record.)

Early Explorers & the Oceans They Traveled

I prefer the much-less-stressful option of doing school with Trail Guide to Learning these days, but Brianna and I did have fun. I hope you find a couple of activities you can use.

Do you have any fun plans to celebrate Columbus Day?