Y’all know how much I love hands-on learning. I lost most of those fun, hands-on opportunities when my teens opted to go to a textbook style educational model. However, for the last month or so, we’ve been using a new hands-on geography product that’s bringing some of that fun, active learning back – and it’s wholeheartedly, enthusiastically teen-approved! 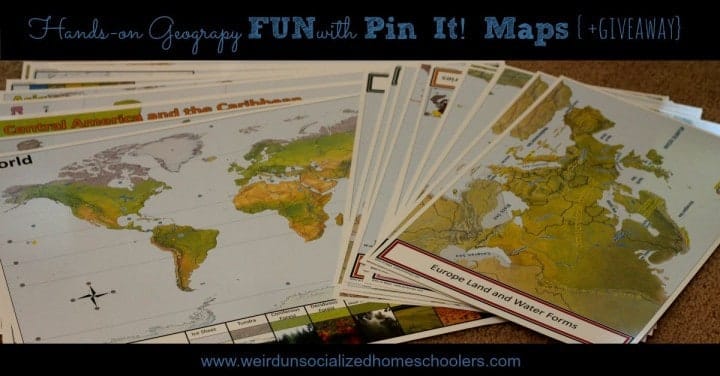 I received this product free for the purpose of reviewing it. I also received monetary compensation for the time invested in writing the review and administering the giveaway. The opinions expressed are my personal, honest opinions. Your experience may vary. Please read my full disclosure policy for more details.

What are Pin-It! Maps? 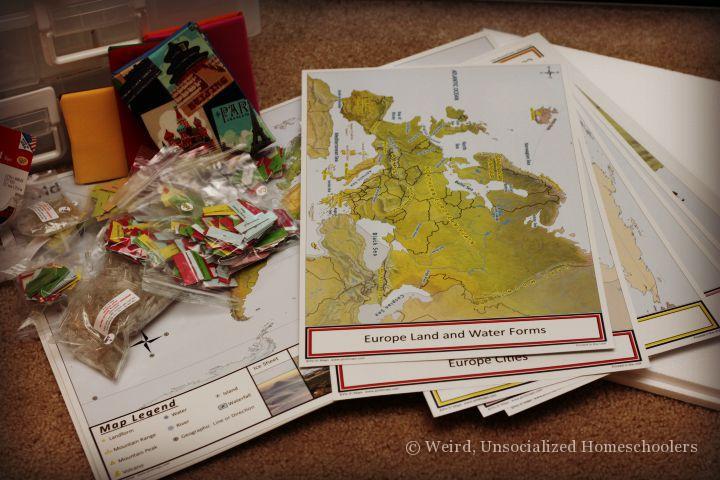 Yes, you read that right – the complete set even comes with the tape that you need to assemble the map pins. The only thing it doesn’t come with, due to liability issues, are the pins you’ll need to assemble the flags, but you can pick them up at any craft store, most major department stores with a craft section, or you can order them from Amazon.

Also pictured are some of the extras we got:

These make storing and using the flag pins so much easier! I really can’t imagine sorting through 1147 flags looking for specific ones. Having them sorted into continents and types of flags makes finding the correct flags a breeze.

The benefits of Pin It! Maps

The great thing about Pin It! Maps is that you can easily incorporate them with what you’re already doing. Megan’s history this year has a strong geography focus and each week she learns about a different area of the world. Her textbook contains rather crudely-drawn, black outline maps with different countries, cities, bodies of water, and mountain ranges numbered. She’s supposed to use a good atlas to label each.

She hated that. It was the worst part of the entire week for her because it’s often hard to tell what, specifically, the textbook is indicating she find. Is it pointing to that river or the city? Even I’ve had trouble figuring it out on more than one occasion.

The best part about Pin It! Maps (as far as Megan and I are concerned) are the beautifully drawn, easy-to-read control maps. These are essentially your atlas. They are the labeled maps that you use to locate what you’re going to pin on the unlabeled pin map. The pin map is a 18 x 24″ blank map held onto a sheet of foam backing by 4 plastic corner pieces. 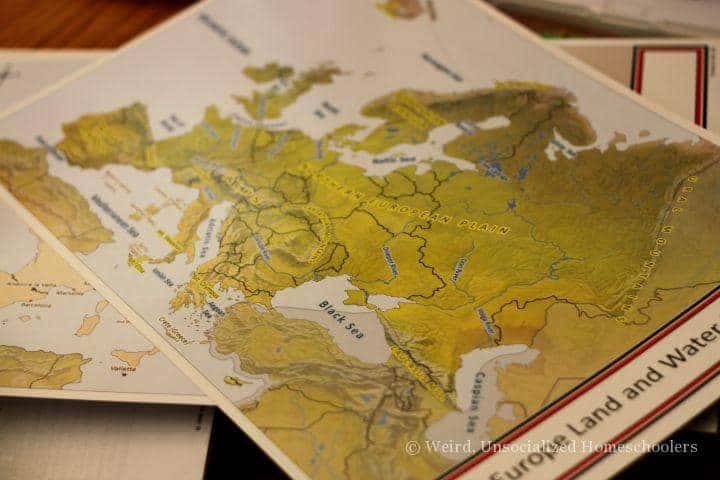 It is so much simpler and cuts out the confusion of trying to weed through all that information. The maps’ creator had her dyslexic daughter in mind when she designed the maps that way, so they’re perfect for kids with learning struggles, but much appreciated by all learning types.

How we use Pin It! Maps

So, how have Pin It! Maps changed the way Megan does geography? Well, for one, she doesn’t hate it now. She totally skips the maps in her textbook. Instead, I make a list of all the places she’s supposed to label. Then, she pulls out all the flag pins for those places and sticks them on a pin cushion.

The pin flags are color-coded to make finding, sorting, and storing them easier. All country pin flags are green, cities are red, waters are light blue, and land forms are yellow. Each flag is also labeled with its corresponding continent on the back. 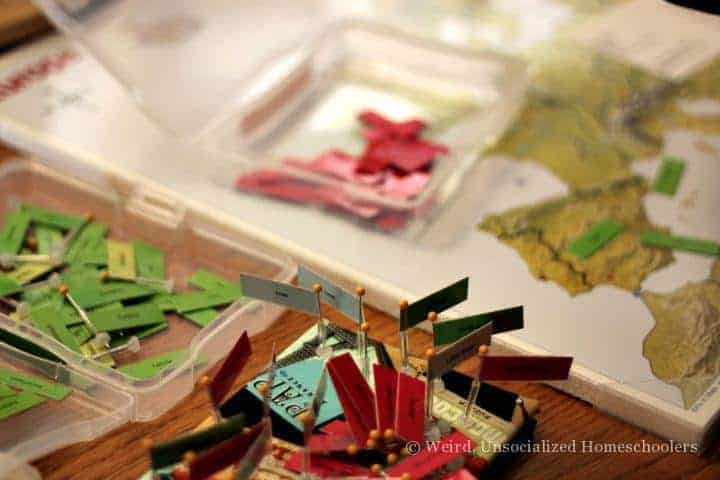 After Megan has located all the flags, she pulls out the appropriate control maps to locate where each flag goes and and labels the pin map. So far, she’s done 4 of her textbook maps this way. In all that time, we’ve only come across one label we needed for which there wasn’t a pre-labeled pin – and that was the Tyrrhenian Sea, which is actually part of the Mediterranean Sea so it wasn’t terribly surprising that there wasn’t a separate flag pin for it. A few blank flag pins are included, so we used one of those.

All that to say that with 1147 flag pins the set is incredibly thorough and versatile for a variety of ages and applications.

We even use the Pin It! Maps for quizzes. I leave Megan with the pinned map to study for the week. When it’s time for her quiz – which always includes a blank map to label – I pull the pins off the pin map and place them on the pin cushion in random order. For her quiz, Megan places the flag pins back on the pin map from memory and is graded on her accuracy.

Grading is easy, too, because I just pull off the flags that were misplaced. 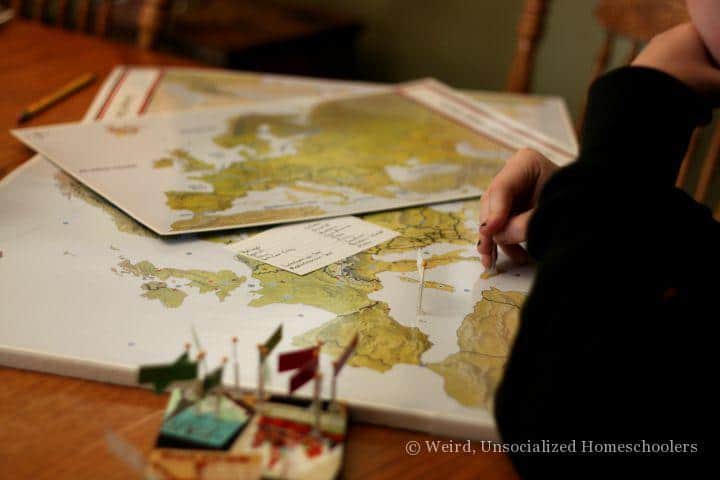 Megan will be the first to tell you that she strongly prefers using the Pin It! Maps to labeling a boring, hard-to-decipher, blank map in her book. Strongly prefers.

Getting ready to use Pin It! Maps

The maps themselves are pretty much grab-and-go. The only thing you have to do to use them is assemble the flag pins. They are fairly easy to assemble, but a bit time consuming.

I had good intentions to sit down one weekend and just put them all together, but I’ve been so busy that we’ve instead been assembling them as we need them, which has worked out fine. The flags come packaged separately by continent, too, so it’s not like you have to dig through nearly 1200 flags to find certain ones.

Megan and I usually work together to assemble the flag pins assembly line style. We’ll find all the ones she needs. Then, I’ll tape the flags to the pins and pass them off to her to slide on the flag pole and attach to the base.

I have seriously thought of using flag pin assembly as a good excuse to sit and watch my favorite chick flick one weekend. If you’re one of those folks who is catching up on a favorite series on Netflix, assembling the flag pins doesn’t require much brain power and could provide a guilt-free reason to sit down and watch a few episodes. You’re welcome. 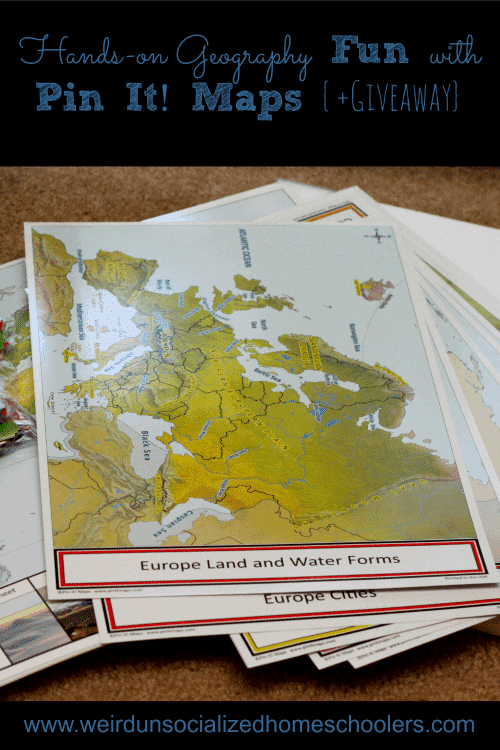 We are truly enjoying these maps so much! They are easy enough for young children to use, but thorough enough for older students, as well. They have made map labeling something that Megan actually looks forward to – and it makes the hands-on mama in me so happy to see her putting aside the textbooks for some kinesthetic learning a little each week.

With the maps’ versatility and thoroughness, you could easily use the complete student set from preschool through high school.