My poor family has learned not to attempt to help me put groceries on the conveyor – or, at least, to just pass the items to me and let me put them where I want them. All the frozen stuff has to go first, followed by meat, followed by dairy. Then, produce, followed by canned goods, and so on. It makes sense because all the cold foods need to go in the cooler bags together so they stay cold. 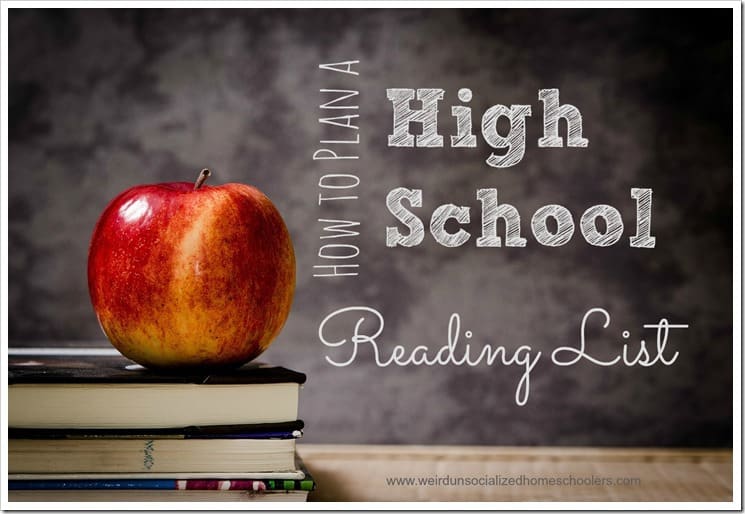 In the same way, I like for my reading list to make sense by grouping similar things together. Doing so makes school more efficient – as efficient as having all the canned goods in the same bag when it’s time to put groceries away.

I love learning history through literature, so it just makes sense to study American lit alongside American history. As we work our way though our country’s history, we’ll read classics such as:

The Deerslayer by James Fenimore Cooper

The Red Badge of Courage by Stephen Crane

The Chosen by Chaim Potok

The Adventures of Tom Sawyer by Mark Twain

We’ve got two years before we hit American history, so the list is a work in progress. And, just for the record, I was not required – therefore, I did not – read a single one of those books when I was in high school. I plan to rectify that by reading them alongside my kids.

In the same way, we’ll be studying world literature along with world history. I’m not sure I’m going to be able to convince Josh to read any of the Bronte sisters’ works, but his list will include the following:

Mythology by Edith Hamilton. I am fascinated by Greek mythology and this is one of the few books I clearly remember from my own high school experience.

The Diary of a Young Girl by Anne Frank.

Lord of the Flies by William Golding

The Screwtape Letters by C.S. Lewis

The Strange Case of Dr. Jekyll and Mr. Hyde by Robert Lewis Stephenson

This, too, is an incomplete list. As much as possible, I’m planning to approach history and literature with the structure that I learned to love so much when we used Trail Guide to Learning. We’ll spend six weeks on a topic or period in history, World War II, for example. During that six weeks, we’ll read at least one related literature selection and one biography.

Finally, I  like Lee Binz’s advice not to focus solely on the classics. Throughout the kids’ high school years, I’ll pair modern literature with its movie adaptation mostly because it’s going to be fun, but also because these books can provide the start of some amazing rabbit trails. This semester, Josh has been reading The Maze Runner and we saw the movie when it came out. Megan read and watched The Fault in Our Stars.

Before we saw The Giver, I read the book with the intention of assigning it to the kids. I didn’t like it, though, and the kids weren’t any more impressed with the ending of the movie than I was the ending of the book, so I didn’t ask them to read it.

I’m keeping a running list of movie/book combo possibilities such as:

The Lord of the Rings series

The Twilight series, which, incidentally got Brianna interested in Shakespeare. If we do this one, I also want to have the kids read Bram Stoker’s Dracula. There is also a series of Twilight-themed vocabulary books by Brian Leaf that she really enjoyed,

The Secret Life of Bees

Where the Red Fern Grows

There are endless choices when it comes to books made into movies. Just of out of curiosity, I’d like to conduct an informal poll. I prefer to read the book first because it usually helps the movie make more sense. Brianna likes to watch the movie first because it drives her crazy when the movie deviates from the book, as it always does.

What about you? Do you prefer to read the book or watch the movie first?

There are a number of ways to plan high school lit courses. However, pairing literature with history and using popular books as a jumping off point for further study makes sense to me. It worked well the first time around with Brianna, so I’m refining the process for Josh and Megan’s high school years.

How do you like to plan reading lists for high school?

This post is linked to Finishing Strong: Homeschooling the Middle and High School Years.