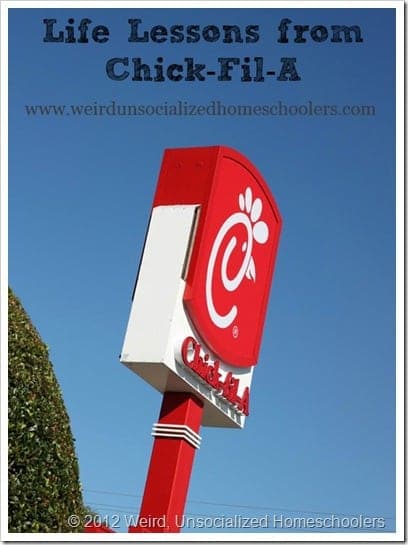 Last Wednesday, my family and I were in Chick-Fil-A having lunch (not an unusual occurrence).  Before we began our meal, we asked God’s blessing over it.  This, also, is not unusual, but was, perhaps, more obvious than usual given the fact that Brian was with us and we were sitting at two tables, rather than one.

Just as we were beginning to eat, a young man, probably in his mid- to late-twenties, stopped by and quietly said something to the effect of, “Hey, I just wanted to say, that’s really impressive.  You don’t see that much anymore.  I really appreciated seeing that.”

Brian and were looking over at the kids’ table, a little confused, trying to figure out what he was talking about when I realized he was referring to the fact that we prayed before we ate.  We thanked him – not being too sure that was the appropriate response, but figuring it worked as well as anything – and he went on his way.

I immediately moved over to the kids’ table to share with them what the young man had said, as well as a bit of insight based on the brief encounter.  First, I told the kids how impressed I was that this guy stopped to compliment us.  It really made me feel good to know that we had made a positive impact on someone’s day.  You never know how a simple little compliment can positively affect someone’s day; be generous with them.

Second, I told them, you never know who’s watching you and how your behavior might positively affect them.  “Now,” I told them, “don’t blow your witness.”

How often do we do something, like pray before eating, and then argue, bicker, make a snide comment or, in some other way, drag Jesus’ name through the mud?  You never know who’s watching; uphold the name of Christ in everything you think, say and do.

Watch your life and your doctrine closely.  Persevere in them, because if you do, you will save both yourself and your hearers. – 1 Timothy 4:16