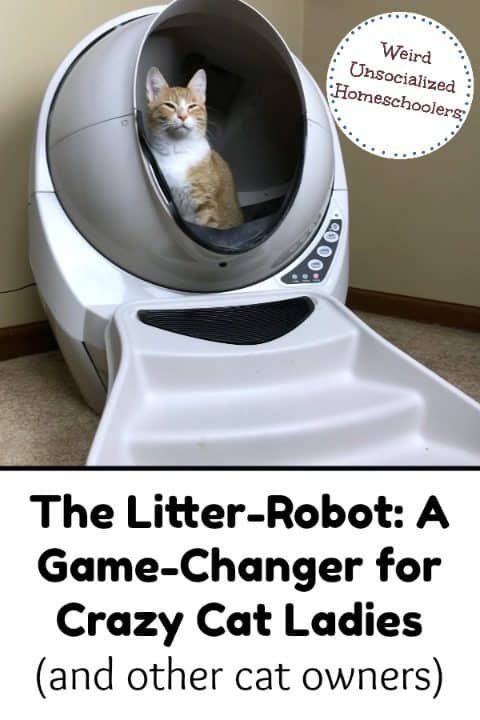 A couple of months ago, I joked about a life-changing event – the fact that I finally gave in and tried Walmart’s pick-up service. You know, the deal where you order your groceries online and pick them up at the store (delivered to your car and everything!).

I was joking, but it has changed my life pretty dramatically – and one of the most significant ways was one that I would never have dreamed.

You see, one week while she was loading my 30+ pounds of cat litter (not an exaggeration), one of the ladies who brings the groceries out was telling me about her Litter-Robot, a self-cleaning cat litter box. 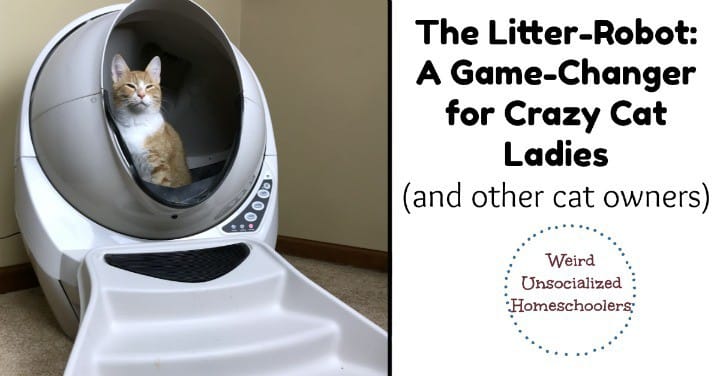 I received a free sample of this product to review. This post contains affiliate links. The opinions expressed are my personal, honest opinions. Read my full disclosure policy for more details.

Although I had thought about getting a self-cleaning cat litter box and had researched them before, I had never heard of the Litter-Robot. Penny – because we’re BFFs on a first-name basis now (exaggeration) – described the Litter-Robot and exactly how it works, stating that it’s kind of expensive, but totally worth it. 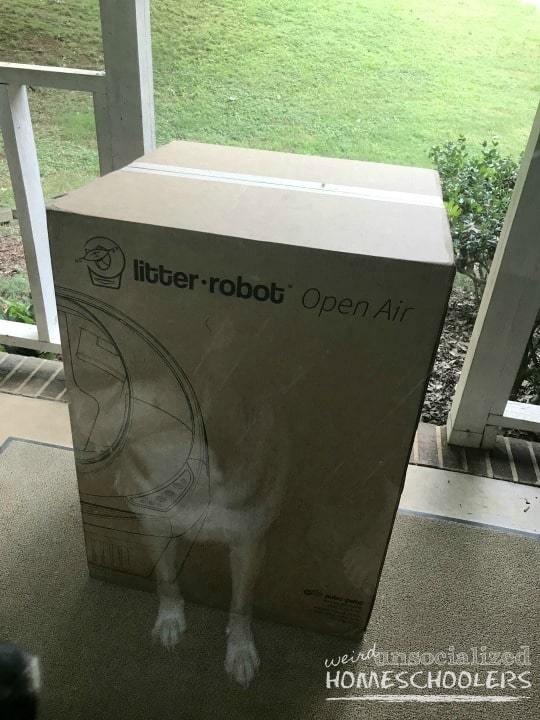 I think I heard the Hallelujah Chorus when the Litter-Robot arrived.

Penny’s enthusiasm got me curious. So, I came home and immediately started researching. I read lots of Litter-Robot reviews. Two of my biggest concerns about automatic litter boxes were addressed right off the bat (and confirmed what my new BFF had already told me).

The Litter-Robot uses basically any kind of clumping cat litter, and it doesn’t require special liners.

The drawback to most of the automatic litter boxes I’d looked at is that they are expensive initially then you have to keep buying special (expensive) litter and liners. 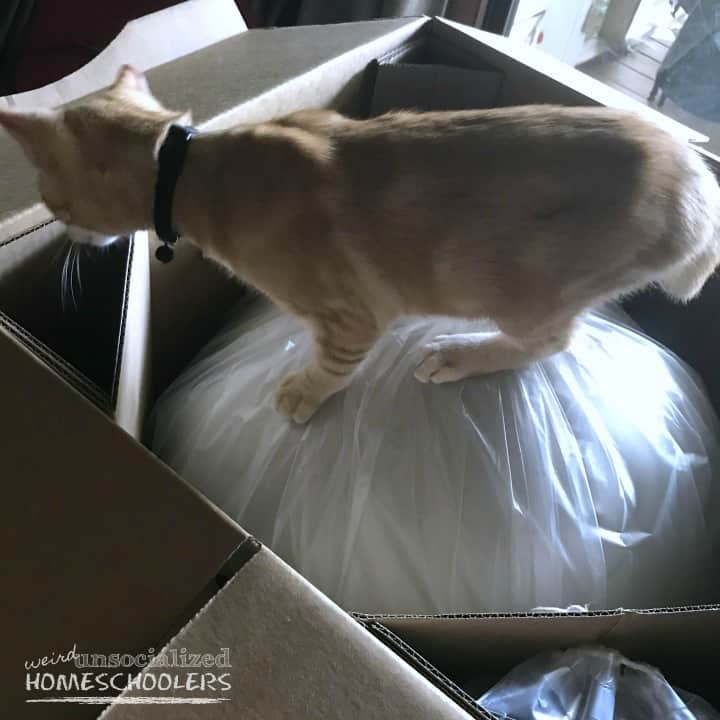 The cats were pretty excited, too.

With the Litter-Robot, I use the same litter I was using and I line it with inexpensive 8-gallon trash bags. You can even use plastic grocery bags if you choose. They’re a little snug, and I prefer the trash bags because they have a drawstring, but I like knowing I could use the shopping bags in a pinch or to save more money.

The folks at Litter-Robot do sell a biodegradable waste drawer liners if you’re concerned about using plastic.

Benefits of Using the Litter-Robot

Although the initial investment in a Litter-Robot may be a bit of a sticker shock, you won’t believe how much time, headache, and hassle it saves! I know some of you are thinking, “Yeah, right. You got yours free to review.”

Yes, I did, but I was already planning on buying one when my husband’s bonus time rolled around if I couldn’t review it.

And, if the company showed up at my door today and demanded I return the Litter-Robot, I’d go out and buy a new one tomorrow. You know, after I dressed the wounds from the savage battled that ensued when they wrestled the first one away from me.

I love the Litter-Robot because it:

I scooped three litter boxes every three days. I hated it.

With the Litter-Robot, I change the waste drawer liner about every other day. And, that’s with four cats using it. 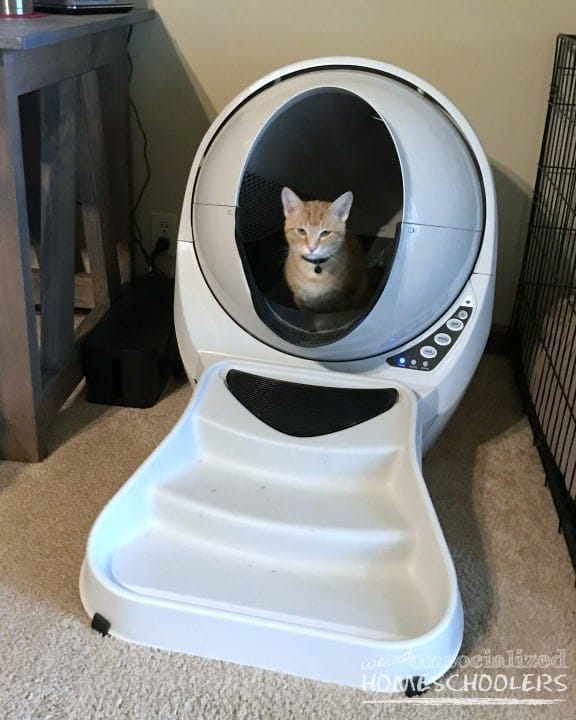 I went from scooping three litter boxes every three days to changing one bag in one box every other day. And there is no scooping at all! See? Life-changing.

No more reminders on my phone. Instead, I get a notification from my buddy, Bob. Bob is our Litter-Robot.

See, there’s an app with the Litter-Robot III Open Air with Connect.  You can control the litter box remotely, and it sends you notifications for things like when the waste drawer is full.

Once you connect the Litter-Robot to your Wi-Fi, you’re asked to name it. I imagine that’s for the people have more than one. (One lady on Facebook said she has five! Seriously, they’re fantastic!) So, maybe they have the “Upstairs Litter-Robot” and the “Downstairs Litter-Robot.”

Not us, though. No, we’re a little weird. (Shocker.) I named our Litter-Robot Bob, and he has taken on a personality of his own. Everyone calls him Bob and we kind of refer to him like another family member.

Hang on. I’ve got to take care of Bob.

The Litter-Robot also uses less litter than traditional litter boxes and keeps the litter cleaner. Because it cycles after every use, the clumps are dumped into the waste drawer right away.

If you’re currently scooping cat litter, you know how the yucky litter mixes with the clean litter after a while no matter how often or how thoroughly you scoop. Then, you have to dump it all and start over.

I’ve been using the Litter-Robot for two months now. Although the owner’s manual does state that you may have to completely replace the litter from time to time, I’ve yet to have to do so.

So far, I’ve only had to top off Bob’s litter when I empty the waste drawer. And, I’ve gone from buying 30 pounds of cat litter every other week to buying it maybe once a month.

The Litter-Robot works on weight sensors. Cats need to weigh at least 5 pounds for it to auto-cycle. (Kittens can use it with the auto-cycle feature turned off.) It cycles 7 minutes after a cat exits the box. The time can be adjusted, but 7 minutes works fine for us. That allows the litter time to clump. Then, the box cycles, dumping the used litter into the waste receptacle.

The waste drawer has a carbon filter system designed to trap in odors. Plus, it’s designed to prevent mold growth.

Right next to my beautiful desk. 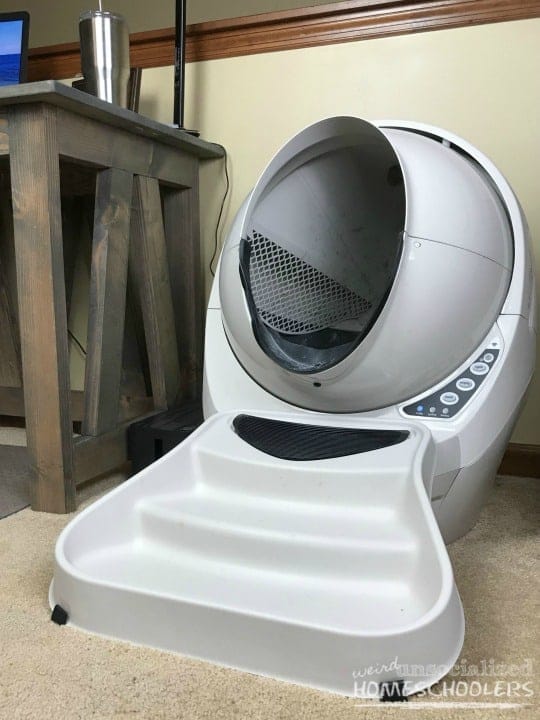 When Brian first saw it, he was a bit appalled at the thought of having a litter box in the living room. Even I admitted that it wasn’t my first choice of location. However, because it controls odors so well, it’s not been the problem we were afraid it might be.

I mean, if I’m at my desk working and one of the cats uses the box, it can be unpleasant for a couple of minutes. (Especially with Oliver. I don’t know what goes on in that cat’s intestines!) It’s not a magic litter box.

However, other than that, there isn’t a noticeable litter box smell.

Okay, you may think that my comment that the Litter-Robot keeps my whole house cleaner is an exaggeration, but I assure you that it is not. I used to have cat litter scattered all over my bathroom within a couple of minutes of vacuuming all the time.

Finn and Oliver tracked litter all over the bedroom where we kept them when they were little. And, the landing at the bottom of our stairs to the basement? More litter.

I didn’t realize how much time I spent vacuuming scattered cat litter until I got the Litter-Robot and didn’t have to do it anymore. It feels like I have so much free time on Saturdays now because of how much quicker I can vacuum.

The Litter-Robot has a rubber mat that catches most of the litter as the cats exit. We have a couple of, well, heavier cats, so I got the optional steps for our box. They catch most of the litter that the mat doesn’t collect. That leaves trace amounts that wind up just at the opening of the box.

It’s so much easier to keep the house clean now!

Getting Cats to Use the Litter Robot

One big concern I had when we got the Litter-Robot was transitioning the cats. I didn’t think the kittens would be a problem, but I worried about our skittish older cat. We’ve had cats who flat-out refused to use regular covered litter boxes, so I wasn’t sure what my clowder (that’s a group of cats) would think about climbing into an automatic litter box.

The Litter-Robot owners manual includes suggestions for helping your cats transition to the new box. Because of space limitations, I wasn’t able to put Bob next to any of the old boxes, but my cats are pretty curious.

I was counting on their curiosity, along with the fact that my scooping days were over as soon as the Litter-Robot arrived, so their other boxes weren’t going to be attractive options for very long.

Oliver, the adventurer, was the first to use it within just a day or two of getting it. For a while, I thought it might be his personal litter box. Sassy was the next one to give it a go (see what I did there?), followed by Finn.

I kept the auto-cycle turned off but made sure the cats were around when I ran a cycle so they could see what it did. That really wasn’t a problem. They were very curious about Bob. 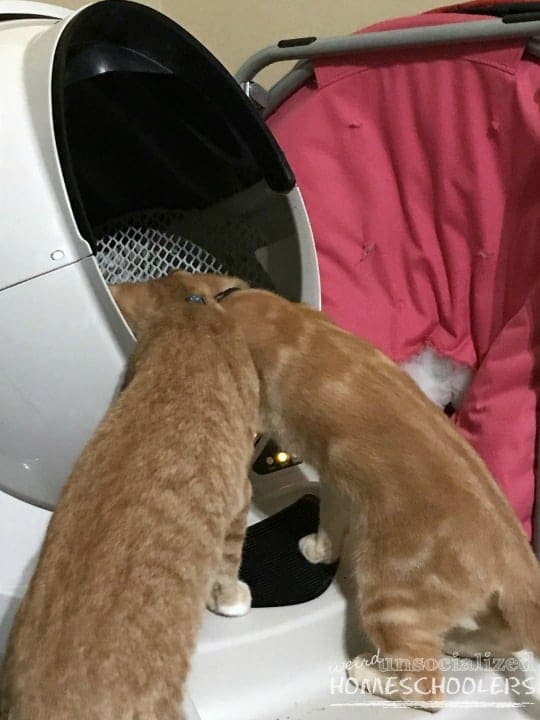 Luna, my skittish older cat, was the lone hold-out. I apologized to the family and a couple of friends for our disgusting litter boxes, but I refused to clean them in my effort to force Luna to use the Litter-Robot.

Then, I resorted to catnip. Finally, I threw all the suggestions out the window (figuratively) and did something that no one would recommend. I made Luna go into the Litter-Robot so she could see it was just a litter box.

She didn’t appreciate me. But, it worked. The next day, I put her in the box one more time. She was much less nervous the second time. Then, I took all the other boxes out of the house. I fully expected to find protest poop in the bathroom floor the next day, but I didn’t.

To this day, I have only actually seen Luna use the Litter-Robot once. She uses it, though. Very stealthily.

Why Try the Litter-Robot?

To say that I love the Litter-Robot is putting it mildly. Not scooping three litter boxes every three days makes me one happy crazy cat lady.

You can save $25 on the Litter-Robot by clicking through any of the links on my site. The Litter-Robot comes with a 90-day money-back guarantee and an 18-month warranty. 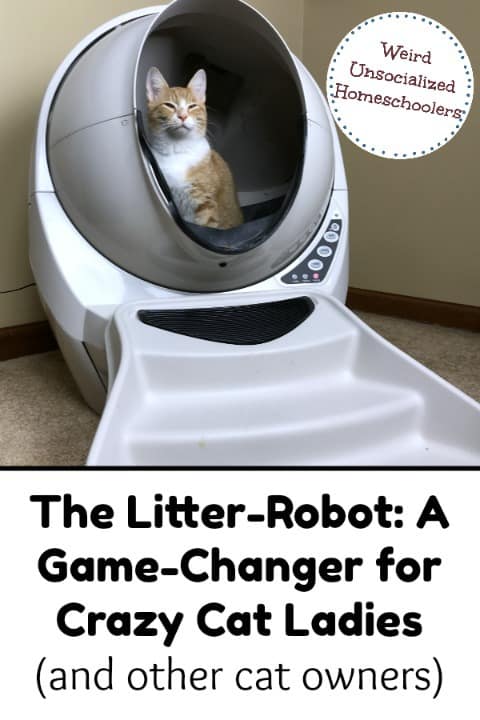 If you’ve got cats and you hate scooping litter, I highly recommend the Litter-Robot. Without a doubt, it has exceeded my expectations, and I’d purchase another one in a heartbeat. (And, I probably will if I get a few more cats. We think we’ll name the next one Wall-E.)

The cats would recommend it, too. They all seem to appreciate having a fresh litter box every time they go.

Check out the Litter-Robot website. They have answers to tons of questions about how it works, the advantages of using it, and how to make the switch.