We’re not a big soup-eating family. Brian and I could probably eat soup more often, but the kids aren’t crazy about it. The only “soup” that the majority of us can agree on is chili, but Megan doesn’t like it.  Megan, Brian and I like my homemade veggie soup or beef stew, but Josh and Brianna don’t. Brian and I love this clam chowder, but the kids don’t.

See why we don’t eat much soup around here?

So, yesterday, when everyone was sick, I was digging around in my recipe box for something to make when I came across this almost-forgotten recipe for loaded potato soup.

Oh. My. Goodness! I had forgotten how good it was. Josh liked it, too, but Megan and Brian were too sick to try it. I’ll be making it again, though. The nice thing is that it’s a recipe for which I generally have all the ingredients. It freezes well in individual servings, too. 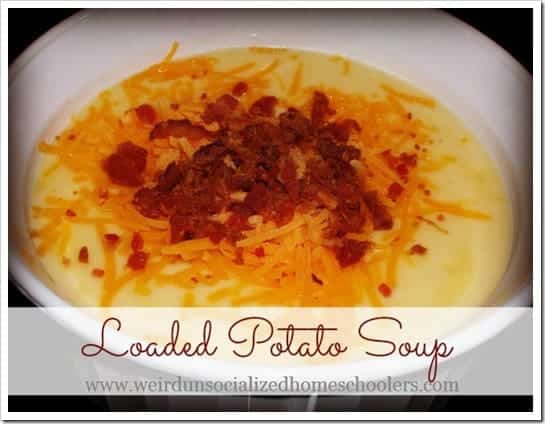 In a large saucepan, cover potatoes with water and boil until potatoes are tender (not too soft or they’ll get mushy). Drain water and add butter. In a separate bowl, mix together flour and milk. Slowly add to potatoes, stirring constantly. Stir in cheese and sour cream until melted. Season to taste with salt and pepper. Serve topped with bacon bit and cheese.