A few weeks ago my mom sent over something that proved to be an interesting conversation piece at our house – an ABC book that I made in first grade. I loved seeing what my work looked like when I was about Megan’s age. And, the smell of “ditto” paper still lingered around the paper.

If you have no idea what ditto (a.k.a. “memeograph”) paper is, you’re younger than me and that’s all I’m going to say about that. Those of you who are knocking on forty’s door (or have already opened it and gone through) know exactly what I’m talking about. 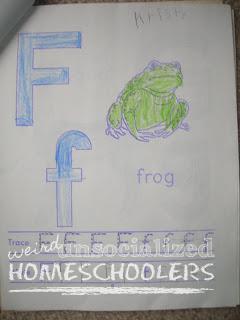 All of my kids agreed that I had it easy. My first grade work was way easier than their first grade work was. They’re right. When I started school, Kindergarten wasn’t mandatory. . I went, but not everybody did, so first grade was spent teaching ABC’s, numbers, rhyming words, writing, and such. Stuff that’s done in pre-K these days.

I distinctly remember several aspects of my Kindergarten years and they were definitely equivalent to today’s preschools – lots of cutting, pasting (with that thick paste that you had to use a stick to spread) and play. {Gasp} 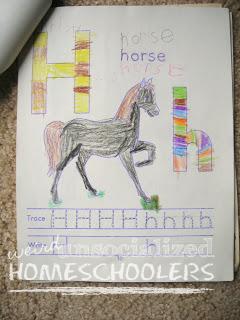 I also distinctly remember a couple of impromptu science lessons. Both involved hypotheses that I’d seen played out on cartoons many times.

The first experiment was to answer the question, “Does the stream of milk that’s being poured into a glass from a pitcher during a lunch refill (no pint-sized milk cartons for us) really stop, mid-stream, if you pull the glass out from under it?”

The second question was, “Will all the plastic cowboys and Indians in this red pail stay in the pail as it sails through the air when I put the cowboy-and-Indian-filled pail on one side of a see-saw (made from those cardboard bricks and some kind of wooden plank…that particular detail escapes me) and, then, jump on the other end?”

The plastic cowboys and Indians rain down upon the room in a very colorful display while the scientist quickly leaves the area, leaving an innocent by-stander to take the blame. If I could remember that kid’s name, I’d look him up on Facebook and apologize. He probably still remembers that event, too…as the day he got in trouble for something he didn’t do.

But, I digress. The point of this whole post was how much the education of our young people has changed. Kids these days are doing, in Kindergarten, what I was doing in second or third grade. They’re taking home one or two hours of homework every night in Kindergarten and first grade – something I didn’t do until fifth or sixth grade.

They’re going to after-school tutoring for “problem” areas – areas that wouldn’t have been problems thirty years ago because they weren’t being taught to kids who weren’t developmentally ready to learn them.

Is the result of these increased expectations kids who are graduating from our public high schools smarter, more productive, or more prepared for adult life than their parents were when they graduated? I don’t think so. If anything, they are graduating less productive and less prepared…and not any smarter about anything that hasn’t happened to make it onto a standardized test.

So why do people – and the government – seem to think that the solution is to push kids earlier and earlier? Seriously, does anyone see that working? Are our test scores are graduation rates increasing? No, what we see increasing are the number and instances of learning disabilities, teen suicide rates, violence in schools, and kids with stress related disorders.

But, you know what? Those of us who homeschool can do something about it. We can quit trying to replicate a failing educational system. We can radically change our preschool and Kindergarten curriculum.

We can provide free afternoons for learning and exploring about the things that interest our children. We can emphasize our kids’ strengths, while shoring up their weaknesses, rather than putting all the emphasis on what they’re not good at and throwing all our energy into trying to fix that since it will very likely fix itself, if given time. We can teach things in a developmentally appropriate fashion.

We can take the time to lay the foundation upon which future skills can be built rather than simply moving the time table of expectations further and further back because, well, that really doesn’t seem to be working.