This week’s post is fun because I got to get my kids’ input. I asked them to tell me what they like about being homeschooled – and, in the interests of transparency, I told them that at least some of their answers had to do with academics.

My kids are now 10, 12, and 17, so I’ve got a representative of elementary, middle, and high school – a nice sampling, if you will. Though, really, their answers didn’t seem to vary much due to their ages. I do think, however, that my oldest child’s answers have changed from when she first came home from public school.

Surprisingly, it wasn’t the friends so much, since we made an effort to continue to get together with them. The two main things she missed about public school were: they had a bigger playground (than our backyard swing set) and they had square pizza. (I started making ours in a rectangular pan. Problem solved.)

Okay, are you ready? My kids’ top ten favorite things about homeschooling:

1. Sleeping late. All three of my kids were in agreement on this one. They are night owls like their mother. They cringe at the thought of being up by the time the bus rumbles by, much less being up in time to catch said bus. 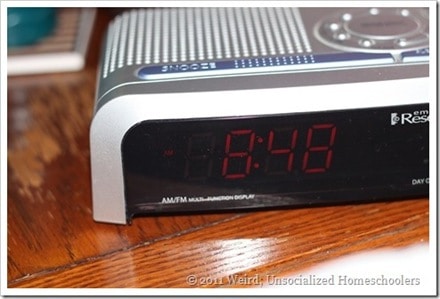 2. A tailored education. Yes, my kids actually said that. I have two with dyslexia. They – especially Brianna, who is old enough to really realize the benefit – really appreciate the fact that we can find curriculum choices that are the best fit for them.

I love that some of the things that were suggested as modifications for Josh when we had him tested for dyslexia were things that we were already doing – giving him more time to complete assignments or reading assignments out loud to him. I have never wanted to let his reading struggles hold him back in other areas, so these are things that I have been doing for years.

3. Doing school in their pajamas.  Yes, it’s true. I’m one of those parents who doesn’t make her kids get dressed unless we’re going somewhere. I’ve got one who usually gets dressed anyway, one who sometimes does, and one who will come home from being out and immediately change back into PJs.  As long at they get their work done, I don’t care what they’re wearing.

4. Being able to include the Bible. I like that my kids are old enough to realize what a cool thing it is that we get to start every day in God’s Word.

5. Long lunch breaks. I’ve said many times that we aren’t morning people. My kids rarely eat breakfast because they don’t like eating for at least an hour or so after they get up. By the time they’re hungry, it’s almost lunch time. So, we do some light schoolwork in the morning – stuff the doesn’t require a well-fueled mind like read-alouds and copywork.

Then, we take a nice long lunch break. It’s a time to eat, check in online, call friends, watch a little TV, or play a few video games. By that point, everybody is awake, fully-functioning, well-fed and ready to jump into heavy-duty schoolwork.

So, basically, “long lunch breaks” means that we like being able to work according to our bodies’ natural rhythms.

6. Working at their own pace. Megan doesn’t understand why she’s only in 5th grade and not able to move up to youth at church, but she’s using a 6th grade math book. That’s because you’re working at your own pace, dear. (And, you’re not ready, maturity-wise, to be in youth.)

Working at their own pace is another component of tailoring the kids’ educations to their needs. They can work faster or slower, move ahead of their traditional grade level or hang back a bit, as needed. There aren’t twenty or thirty other kids’ needs to put ahead of their own. Each of my kids can work at a pace that’s just right for them.

7. Having friends a variety of ages. Brianna had a birthday party a couple of weeks ago. The guests ranged in age from 14-22…and everyone had a great time. She’s got friends younger than 14, too.

When I was in public school, it might be cool to have a friend who was older than you, but it was not too cool to have younger friends. I mean it happened, but it wasn’t the norm.

I love – and so do they – that my kids can be friends with whoever they enjoy being with, regardless of age or “grade level.”

9. No homework. One time a public school kid asked Brianna about having homework. Brianna told her she never had homework. I think the kid was ready to be homeschooled right that very moment.

We laughed about it later. I told Brianna, it’s all in your perspective. There’s either no homework or it’s all homework. She has chosen to look at it as no homework, and she enjoys that. 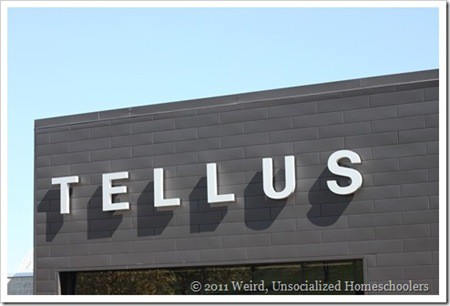 10. Taking cool field trips. We have had some great field trips over the years. The best thing about them, though, is that we can go where we want to go – to the places that are of interest to the kids and relevant to what we’re studying.

One of my most memorable trips was to the Coca-Cola Bottling Company. It was so cool to see how all that works and how the lids are put on the 12-ounce cans.

Then there was the police K-9 demonstration where were were asked not to take any pictures during the one dog’s demo because he might go nuts. Then, the one officer had to “choke him off” the other office because he didn’t want to obey the command to release.

Yeah, that one was very interesting.

So those are my kids’ top ten favorite things about homeschooling. What about your kids? Have you asked them? I’d love to hear what they have to say.

This post is linked to the iHomeschool Network 10-in-1o blog hop and Top Ten Tuesday.