You know how sometimes your kids just need to memorize stuff and you are reminded that memorization can be b-o-r-i-n-g? Enter Franky Fox Academy.

Franky Fox Academy is an entertaining, PC-based game that makes memorizing facts fun! Using the keyboard arrows and spacebar, kids (and adults) can maneuver Franky through several different game layouts as they work to memorize facts such as:

Those are just some of the topics that come pre-loaded on the game, which is currently available as an instant download. There are currently a dozen more topics on the Franky Fox Academy website that you can download or you can create your own! 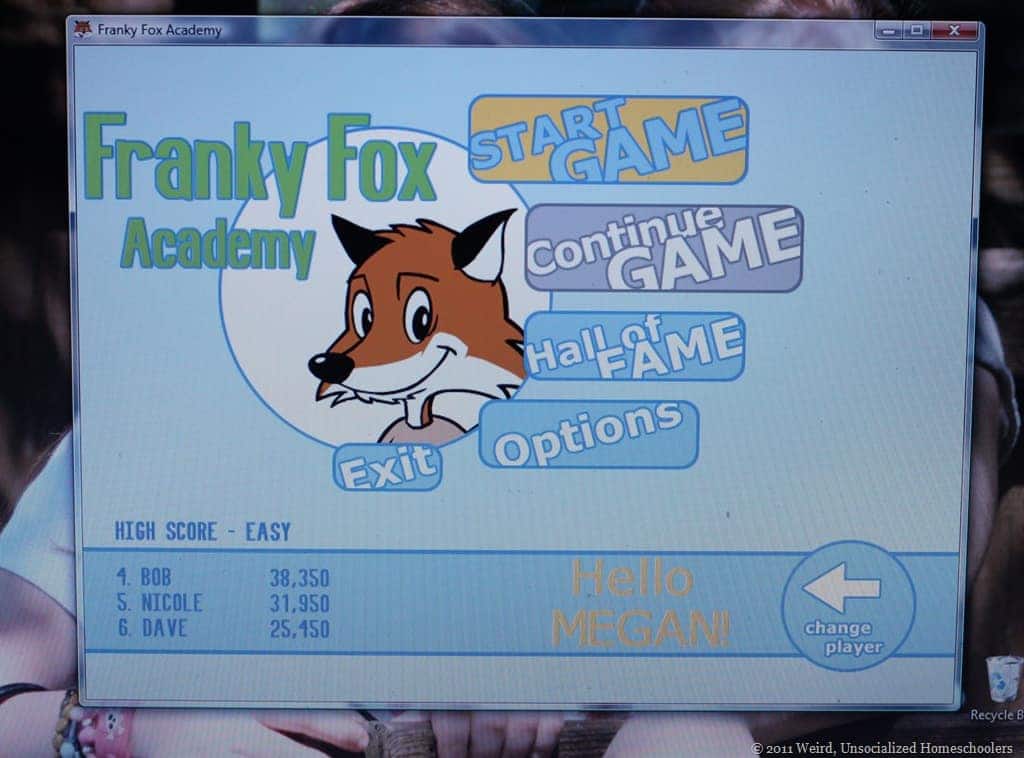 We’ve been learning about the early European explorers, so I created a topic list of the names of the explorers we’ve been studying so that the kids could work on memorizing them. Just having the names in their brains, makes it easier to attach facts to the right person. That’s my theory, anyway.

There are four skill levels for each topic and increasing levels of difficulty within each skill level. The game layout stays fairly consistent. The first couple of levels require you to move Franky around a grid, clicking on right answers while avoiding dangers such as a giant fly and a frog. 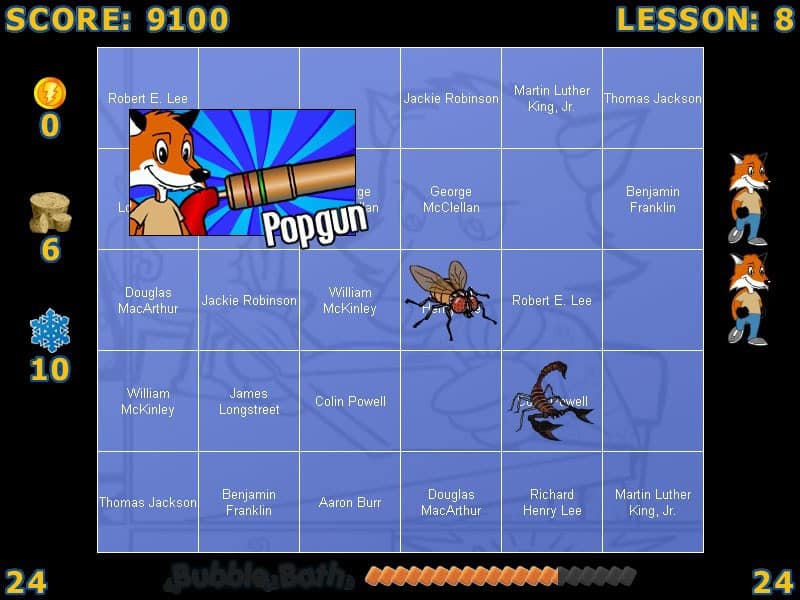 Players can earn extra points by picking up flowers or coins. With enough points, you can even pick up a weapon with which to defend yourself, such as a popgun to knock the enemy off the screen briefly or shoes that let you run out one side of the grid and appear on the other.

As the difficulty progresses, players must beware of falling dangers, such as dozens of tiny frogs, which can be really difficult to avoid.

The only thing that I didn’t like about the game play itself was that I seemed to only get one shot at my favorite level, the snowball fight. It took me awhile to figure it out…or maybe I didn’t ever figure it out since I never got past that level.

Once I lost that level, the game would send me back to the grid screen. Then, I’d get frustrated that I didn’t get another shot at it and go choose a different topic to play instead.

Franky Fox is strictly a memorization tool, so, while the topics can be very broad, you would have to limit the information on any self-created to things that could be memorized. For example, your child might be working on the sums of ten, so you might create a topic with answers like:

Or, you might be working on learning geographical terms. You wouldn’t be able to use Franky Fox Academy to drill the definitions, but once a kid has played and become familiar with the terms, oftentimes attaching a definition to them is easier (in my theory). In that scenario, you could do topics such as: bodies of water, islands in the Pacific, or even terms related to water (river, ocean, fjord, inlet, bay).

We thought the graphics were very well-done. They are, of course, PC-game graphics, not high-dollar video game graphics, but, honestly, they were much more high-quality than I expected for such an inexpensive game. They’re cartoon-like with fairly realistic movements and reactions.

Franky Fox Academy is available for only $9.95, which is inexpensive to begin with, but even more so when you can add your own topics or download from the website topics that others have created.

I received this product free for the purpose of reviewing it. I received no other compensation for this review. The opinions expressed in this review are my personal, honest opinions.  Your experience may vary. Please read my full disclosure policy for more details.
+ posts