If you know me at all, you know that I love a good romance novel. When I think of Biblical romance stories, I tend to think of Ruth and Boaz or Rachel and Jacob. The story of Esther has always been more of a story of the heroism of a brave woman. 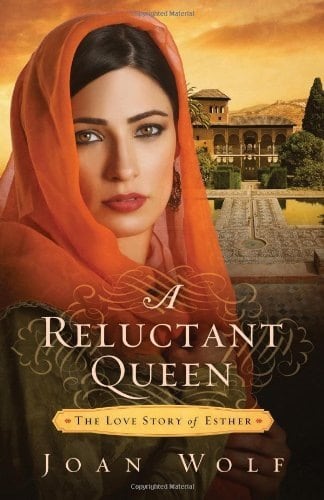 When I heard of the book, A Reluctant Queen: The Love Story of Esther, by Joan Wolf, I knew I had to read it.

An inspiring re-imagining of the tale of Esther, a young Jewish woman thrust from a life of obscurity into a life of power, wealth, intrigue . . . and tender love.

See the story of Esther in an entirely new way-with all the political intrigue and tension you remember, but told as a passionate and tender love story between a young man and woman. Misunderstood by many, King Ahasuerus was a powerful but lonely man. Esther’s beauty caught the eye of the young king, but it was her spirit that captured his heart.

A Reluctant Queen is one of those stories that captures the reader’s interest from the beginning and doesn’t let go. The characters are believable and well-developed with their own unique personalities and quirks.

The story is a little different than you might remember the Bible. You’ll recognize the key players and the major details, but it’s not a repeat of the Biblical story with some extra embellishments thrown in. It’s more one author’s interpretation of what the relationship between Esther and Ahasuerus might have been like.

Esther, as you would expect, is a strong character who displays compassion, grace, and a sense of humor. She is obedient to her guardian, Mordecai, and humble in her role as queen without being anyone’s doormat. She is brave, clever and intelligent.

Ahasuerus is everything you want in a hero– attractive, strong-yet-kind, powerful, and witty. And, in Wolf’s tale, he is something you might not expect of a king with a harem – faithful to the wife he loves.

A Reluctant Queen is every bit as good as any Scottish Highlands romance novel I’ve ever read. Full of intrigue, bad guys, and tension, it will keep you turning pages. This book also has something that I’m very fond of in my books – strong secondary characters with their own personalities and stories to tell.

By the time you finish reading, you’ll feel that you know Esther’s maid and her eunuch guard as well as you know the primary characters. You’ll even discover the the imposing Mistress of the Harem has a soft spot.

If you’re looking for an engrossing summer read and you’re a sucker for a good romance, add A Reluctant Queen: The Love Story of Esther to your summer reading list.

I received this product free for the purpose of reviewing it. I received no other compensation for this review. The opinions expressed in this review are my personal, honest opinions. This post contains affiliate links. Your experience may vary. Please read my full disclosure policy for more details.
+ posts