Let’s just make this short and sweet: I loved this book! You may recall that I reviewed author Rosslyn Elliott’s debut novel, Fairer Than Morning, and thoroughly enjoyed it, so I jumped at the chance to review the second in the series, Sweeter Than Birdsong. 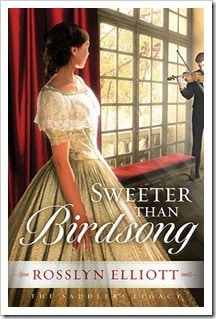 Sweeter Than Birdsong tells the story of Ben Hanby (son of Will and Ann Hanby from Fairer Than Morning) and Kate Winters, who attend Otterbein College together in Ohio. I really love the research that Ms. Elliott obviously puts into her novels. It was so interesting to me to read about the girls attending this college and having their female chaperone with them because it would be unseemly for a group of unmarried young women to be in the company of unmarried young men.

It was also really cool to look up the song that Ben wrote in the story (sorry, no spoilers!) and read about the real Ben Hanby. I knew that the story was based on actual people and events, but it was still really incredible to read about the actual events yourself.

Kate is an intelligent young woman who is stifled by her fear of speaking – either to groups or young men her age. She longs to overcome her fears, stand up to her overbearing mother, and follow her own hopes and dreams for life.

Ben, a young musician with a future in the ministry, dreams of putting an end to the injustices of slavery, but who begins to dream of a future financially worthy of the beautiful and wealthy young Kate Winters.

From the back cover:

“In Westerville, Ohio, 1855, Kate Winter’s dreams are almost within reach. As the first woman to graduate from Otterbein College, she’ll be guaranteed her deepest wish: escape from the dark secret haunting her family. But with her mother determined to marry her off to a wealthy man, Kate must face reality. She has to run. Now. And she has the perfect plan. Join the upcoming musical performance and use it to mask her flight.

Ben Hanby, Otterbein College’s musical genius, sees Kate Winter as an enigmatic creature, notable for her beauty, yet painfully shy. Then he hears her sing and the glory of her voice moves him as never before. He determines to cast her in his musical and uncover the mystery that is Kate. Still, he must keep his own secret to himself. Not even this intriguing woman can know that his passionate faith is driving him to aid fugitives on the Underground Railroad.

A terrifying accident brings Kate and Ben together but threatens to shatter both their secrets and their dreams. Kate can no longer deny the need to find her courage and her voice if she is to sing a new song for their future.”

When I reviewed Fairer Than Morning, I said that Rosslyn Elliott had knocked the ball out of the park. Well, she’s two for two now. I devoured Sweeter Than Birdsong in a matter of days. I loved it so much that I immediately got on my Facebook page and recommended it there.

I loaned it to a friend and she confirmed my feelings – she, too, read it in a matter of days and loved it. We’re both anxiously awaiting the third in the series. So, I can say, with a great degree of confidence, that you don’t want to miss this book!