Well, the “for sale” sign isn’t in the front yard yet, but it may be by tomorrow afternoon. Brian did say that the next time we found a snake in the house, he was moving! Of course, this one wasn’t technically in the house. It was in the garage.

Brianna went out in the garage to get something and hollered, “There’s a snake out here!” She’s just like her mama now in that, unless a snake startles her, she’s not terribly afraid of it. So, we all went out to see what it was. It was on its way out a small hole where some electrical cords are run for outside lights. It was still more in than out, so I could see that it looked very much like a young corn snake. However, not being able to see it’s head, I wasn’t going to grab it and chance that I was wrong. We went outside with a flashlight to see if it was coming out where we thought it would.

I really thought it was a corn and in the dark it looked so much like Cheyenne, and about her size, that I made Brianna go check to make sure she was still in her tank. She was. I asked Brian to get me some work gloves, just in case it decided to strike at me when I went to pick it up. He did, but he grumbled the whole time about snakes, me and snakes, snakes in the house, and moving.

Brianna got me a box and we snagged the little guy pretty easily. Later, upon seeing the temporary home I’d created for our visitor, Brian adamantly refused to allow another snake in the house. That’s the nice way of saying that he was seriously mad when he saw what he assumed (probably accurately, if I’m being honest) was my intention to seriously consider keeping this one. He told me no, in no uncertain terms, and even threatened to let my two, store-bought pet snakes go if I kept this one.

I found the whole thing slightly amusing since I didn’t know he was really that uptight about having any of the snakes in the house, but I assured him that we didn’t have to keep the snake, that my friend, Susan, had said her family might keep it for awhile, if we decided not to.

We looked the snake up on the Internet, since I thought his head didn’t quite look like that of a corn snake and found that my second guess was correct. He’s a rat snake. I know that they are generally pretty docile, even in the wild, but started wondering if he might be someone’s escaped pet when we successfully convinced him to eat a frozen/thawed pinkie mouse with very little coaxing.

I was surprised at that since wild snakes are used to eating live prey and usually take a while to convert to frozen/thawed. I found it amusing how excited everyone was to watch a “wild” snake eat. You know, since it’s so much different than watching a pet-store-bought snake eat.

Here’s a picture of this week’s guest (along with the handful of pine needles I wound up with when I grabbed him): 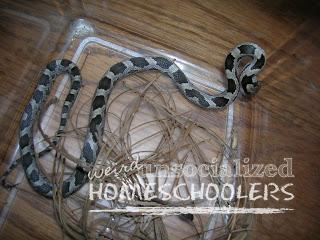 So, who wants to come spend the night at my house? Or, buy it.