You know, I’ve really gone back and forth about the whole workbox thing.  When I first heard about it, I decided that it wasn’t for me.  Then, the more I heard people talk about it, the more intrigued I became.  I was very excited when the opportunity came up to review it.

As you may recall, I didn’t set up our workboxes the way author Sue Patrick suggested (which is no surprise to those who know me).  I set up work(file)boxes for the kids with hanging file folders for their workbooks, folders and papers.  I’ve gotta tell you, I’ve come to love our work(file)boxes. 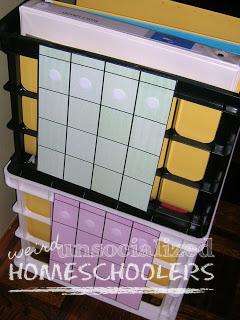 The only problem I have had with our workboxes is that the kids are pretty hard on the file folders and the number squares.  So, I spent some time during Christmas break updating the boxes.  I can’t do much about the file folders, other than remind the kids to take it easy on them or next time they’ll be replaced with utilitarian green folders rather than the cheerier, more expensive primary colored ones that I bought.  I did replace as many as I could with the folders that I had left.

I think I made the number squares and the grids to which the kids stick the squares when they’ve completed their work a bit more sturdy, though.  I reprinted them — on card stock again — then, I laminated both the squares and the grids using self-laminating sheets.  I love those things.  I did cut everything out before laminating to avoid having the laminated edges come loose. 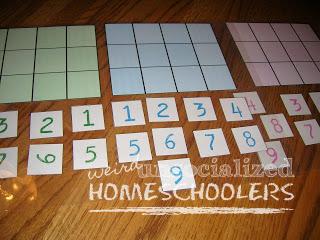 After they were all done, I taped the grids to the crates with packing tape and reapplied the Velcro dots to everything.  Now, I’m set to go for the week.  I think these may come in very handy as I try to figure out how to fit in my workouts in the morning without starting school so late.  I’m sure the kids are going to hear the now-familiar cry of, “Go ahead and get started on the stuff in your boxes.” 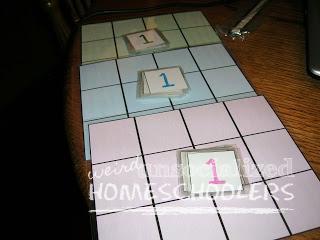 Did you do any behind-the-scenes stuff that you’re hoping will make your life easier for the last half of the school year?