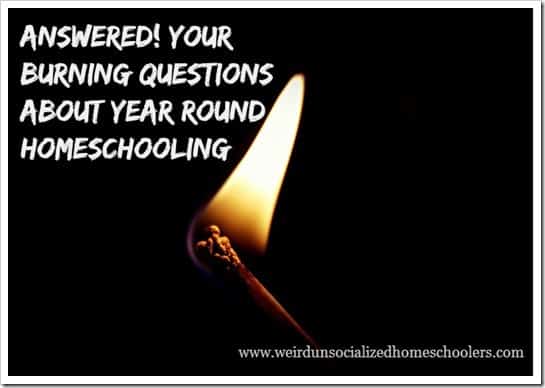 How do you accomplish year round homeschooling?

There are many different ways to accomplish year round school. It’s even been suggested to me that what my family does isn’t really year round schooling because we take off six weeks in the summer and in December.

Whatever. It sure feels year round when you’re starting school in July.

What we do is six weeks of school, followed by one week off. We typically start the second week in July, which gives us time for three 6-week sessions before Thanksgiving. We then take off the week of Thanksgiving until the first Monday after New Year’s Day. This usually gives us time to finish the last three 6-week sessions before Memorial Day. Then, we start the cycle again in July.

For those who would like to school year round, but don’t like the idea of six weeks on/one week off, I have previously shared other potential ways to schedule your homeschool year.

What are the pros and cons of year round homeschooling?

I have seen only the benefits of year round schooling. I really can’t identify any cons. I asked my kids. The only thing the girls could think of was not getting a longer summer break. They both agreed that this schedule is pretty awesome.

Josh said the only thing he doesn’t like is that sometimes our breaks don’t coincide with those of his public school friends. (I don’t hear much complaint about that except when they’re off and we’re not.)

How do you convince your kids to school during the summer?

The first year was the trickiest, when we were starting school in early-July, rather than mid-August. However, everyone liked the idea of a week off at the end of every six weeks, so all the kids were game to give it a try. We all love that week off so much, that it’s never been hard to convince everyone to get started in July after that.

There is always a little grumbling – even from me – because our summer break goes by so quickly, but we all know it’s worth it, so we press on. Add to that the fact that it is too miserably hot in the summer to do anything else, and it’s not a hard sell.

How do you balance year round schooling with summer activities, camps, and playing with public school friends?

That really hasn’t been a problem for us. Church camp is in early June, so we’re on our six week break at that time. Megan attended a gymnastics camp last summer. It is a one-week camp, offered 3 different weeks, two of which don’t conflict with our schedule, so she chose one of those two weeks.

My kids public school friends are cousins or friends from church. We just arrange play dates with them as we would at any other time of year.

We do Kids Bowl Free in the summer. To me, activities like bowling, gymnastics or swimming are a good fit for PE during the summer months, as long as they only take up a few hours of the day and don’t completely derail the whole school day.

Ever since we started year round schooling, we have arranged our schedule with a built-in catch-up day on Friday. This is a lighter school schedule day that can be used for afternoon play dates (which became “social outings” once the kids hit middle school – “play date” is so elementary-sounding, apparently) or to make-up schoolwork from earlier in the week that may not have gotten completed. This ensures that there is still room for fun during the summer.

How do you do year round schooling without burning out yourself and the kids?

I can honestly say, without a moment’s hesitation that schooling year round has been, for me, a much more effective way to combat burnout than the more traditional school schedule we were following before. We know that we get a break at the end of every six weeks. This allows time for routine appointments such as hair cuts, eye exams, and dental and doctor appointments, without disrupting the whole school day, along with some much-needed downtime.

After two (or has it been three?) years of year round schooling, I cannot even imagine going back to a schedule that has us doing weeks at a time with no end in sight.

Not only does year round schooling provide sanity-saving benefits, but it allows for flexibility, too. If something happens that causes you to need a week off, you can just adjust your schedule and either make that week up during what would have been your week off or during the long summer or Christmas break.

How do you handle sick days with a year round schedule?

We have been very fortunate not to have too much sickness, so this hasn’t really been an issue for us. Depending on the severity of the sickness, we carry on with school as much as we can. I’ve yet to have anyone so sick that we couldn’t curl up in bed and enjoy reading aloud and Bible study.

This is another place where having a built-in catch-up day comes in handy. One sick day can be absorbed in that built-in day. Several sick days can either be absorbed in several weeks worth of make-up days (no light school Fridays for a few weeks) or by adjusting your weeks off or long break schedules.

What do you do with the make-up day if nothing needs to be made up?

We learned the concept of a built-in make-up day with Trail Guide to Learning, which offers a light school day to allow room for things like co-op and outside classes. Trail Guide offers enrichment activities for those days if you don’t need a light day for other activities.

That is a concept you can carry over to your homeschool. A light school day (or catch-up day) can be used to catch up assignments that didn’t get done or to do things that otherwise might fall through the cracks. Some ideas include:

Basically, the concept of the built-in make-up day is that learning is still taking place, but it’s not something that can’t be skipped without derailing your entire schedule.

What does your weekly schedule look like on a year round school schedule?

We have some subjects that we do daily (or four days per week, leaving the fifth day for enrichment) and some that we rotate. Our daily subjects include:

The subjects we rotate include:

Rotating some subjects allows us to spend longer blocks of time on those subjects, which allows us to get more done without feeling rushed.

I had heard about year round schooling for many years before we tried it. I never could quite wrap my mind around it or how it would work with summer birthdays and, well, just summer. Having done it for several years now, though, I would list it somewhere in the top 5 of things I wish we’d done from the beginning.

Do you have more questions? Leave them in the comments and I’ll try to answer them. Do you school year round? What questions have you been asked? 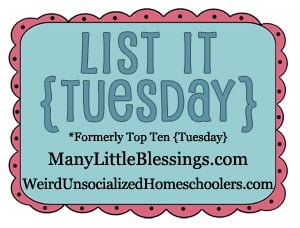