Do you remember, a few years ago, hearing the news story about the 16-year-old girl who had become lost at sea while trying to become the youngest person to solo circumnavigate the globe?

We watched and prayed with the rest of the world.

Abby Sunderland was found safe, but injured, and was rescued from the Indian Ocean, unable to continue her journey. Oh, and the record she was trying to beat? It was set by her brother, Zac. 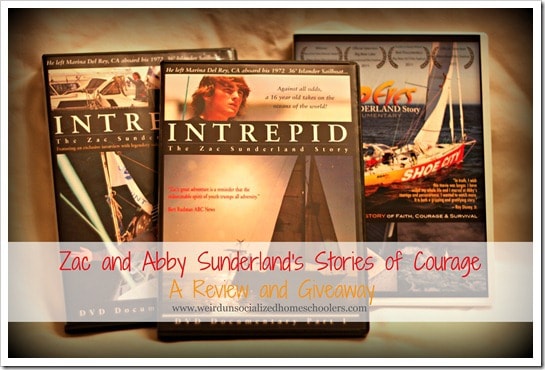 Last year, I had the privilege of getting to know Zac and Abby Sunderland’s mom, Marianne, online. She has an incredible blog full of fantastic resources for parents of dyslexic kids, since 6 of her 7 reading age, homeschooled kids are dyslexic.

When Marianne offered me the chance to review her children’s documentary DVDs, I was thrilled to agree. I thought they were something that would fascinate my kids – the story of two kids, about the age of my oldest, who had taken these incredible journeys on their own at such a young age.

I think my friend, Amy, perfectly summed up my thoughts about my kids watching these DVDs – kids need role models and the Sunderland kids exemplify the concept of doing the hard things. 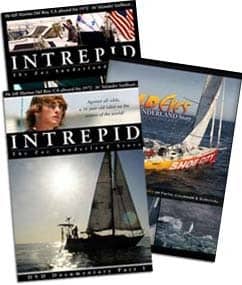 Zac’s story is told in Intrepid, Parts 1 and 2.

Intrepid is not only the name of Zac’s boat, but a very good description of the person himself. Zac set off alone, at the age of 16, to become the youngest person to solo circumnavigate the globe. He was at sea for over 13 months, stopping at various ports along the way and facing some amazing, and often frightening, challenges on his journey.

Part 2 starts off with the tale of his run-in with pirates. It’s funny because I had that DVD playing while I was in the kitchen alone washing dishes. Josh came wandering in and asked, “Can I watch this,” thinking it was some action movie I was watching. Then, Brian came in. Pretty soon, the kitchen was full of people standing around watching and waiting to see what happened.

Abby’s story is told in a single DVD, Wildeyes, winner of such awards as:

One of the things I liked best about Abby’s story is the fact that her dad wanted her to be a part of every aspect of preparing her boat for the journey. She was there for all the work that was done – watching, learning, and doing, so that she could handle whatever came up when she got out on the water on her own. Hands-on homeschooling at its finest.

Abby and Zac’s parents were often ridiculed for letting their children set off on such dangerous journey’s alone and at such young ages. Honestly, I couldn’t imagine it myself. I told Brianna, as we watched Abby’s story, that I couldn’t imagine letting my 17-year-old son fly to France to meet his 16-year-old sister and having the two of them wander around Paris together for a bit before boarding a plane back to the states. However, it becomes clear, as you watch the documentary videos, that both young people had been being prepared for such a journey from the time they were young children.

In one of the DVDs, Zac makes a point that I’ve mentioned before, which is, essentially, we don’t expect a lot from our teenagers. They go through this period of adolescence that used to be a time to prepare them for adulthood, but has now become just an extended childhood. Our teens need to be discovering and pursuing their passions so that they can become the men and women God has called them to be.

See, that’s another fact that quickly becomes clear as you watch any one of these three documentaries – this family loves God and He is a central part of their lives. Their faith and their values have clearly shaped their lives, their family, and their actions. They are boldly and unashamedly Christian.

If you’d like to be as encouraged and inspired by the Sunderland family as we’ve been, you’ve got a chance to enter to win the 3-DVD set, published by WorldWind Productions. 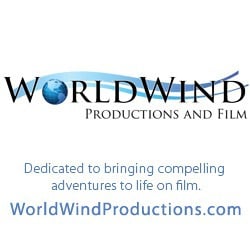 If you’d like to purchase the DVDs, you can receive 40% off using coupon code, HAPPY2013. And, if you purchase, then win, WorldWind Productions will refund your purchase price, so you don’t have to wait if you want to go ahead and take advantage of the discount.

Follow the directions on the RaffleCopter widget below to enter.  (RSS feed and email readers will need to visit the blog to enter.)

Rules: This giveaway is open to United States residents, ages 18 years and older only. Giveaway ends on Monday, February 4. The winner will be selected at random using Random.org via RaffleCopter.

The winner will notified via email and given 72 hours to respond. You must enter a valid email address to win. In the event that the winner cannot be contacted by email or does not respond within 72 hours, the prize will be forfeited and and alternate winner selected.

Click to read the complete rules. By entering this giveaway, you indicate that you have read and agreed to abide by these rules.

I received this product free for the purpose of reviewing it. I received no other compensation for this review. The opinions expressed in this review are my personal, honest opinions. Your experience may vary. Please read my full disclosure policy for more details.