Happy Friday!  This week’s wrap-up is an early one because I’m getting ready to wrap school up today and send the kids off to the grandparents’ for the weekend.  My and Brian’s anniversary is next Tuesday.  (Is there a grammatically correct way to say that?  If so, was that it?)  We’ll be celebrating 19 {mostly} wonderful years of marriage.  Unfortunately, we’ll be celebrating on the actual day with school, volleyball practice and a softball tournament.  So, we’re celebrating early this weekend.  Nothing terribly exciting, but it will involve a meal or two that I don’t have to fix and time alone with my husband, so I’m not complaining.  It might also involve me getting to see Eclipse again.  Maybe.  I’m just sayin’.

I don’t know about you, but this week has flown by for me.  Our second full week of school has gone reasonably well.  We added in writing on Tuesday, with Institute for Excellence in Writing.  The first day went well, with everyone watching the DVD lesson together.  It was long, but there wasn’t really any complaining.  Andrew Pudewa is an engaging and funny speaker, so I don’t think it’s going to be a problem keeping the kids’ attention with the DVD lessons as we go along.

Having the kids write their own paragraphs from their key word outline was a different story.  Brianna did great on her own, but this is Josh and Megan’s first experience with formal writing and they needed a lot of one-on-one help.  There are two of them and only one of me.  Not a good combination.  I was going to split them up next week, for the writing part, since that’s ultimately what I wound up doing this week — sending one off to work on something else while I worked with the other.  However, I think next week I might just let them work on brainstorming and writing the sentences together.  I think talking it out might help both of them and I don’t think it really matters, at this point, if they wind up writing essentially the same paragraph.  Once they get the hang of it all, they’ll be writing their own.  Anyone who’s used IEW have any thoughts on that?

We’ve had a lot of fun with science this week.  We’ve been studying cells with REAL Science Odyssey and it’s been one of those weeks where I’ve learned something myself.  We’ve looked at eggs many times as an example of a cell that you can see without a microscope, but nothing I’ve ever used has ever pointed out that little white dot on the yolk (the blastodisc) is what the chick develops from.  I always thought the chick developed from the yolk (don’t laugh, it’s not  nice), but that’s actually what feeds the chick, you know, in case you didn’t know either.  Reason Number 102,339 why I love homeschooling. 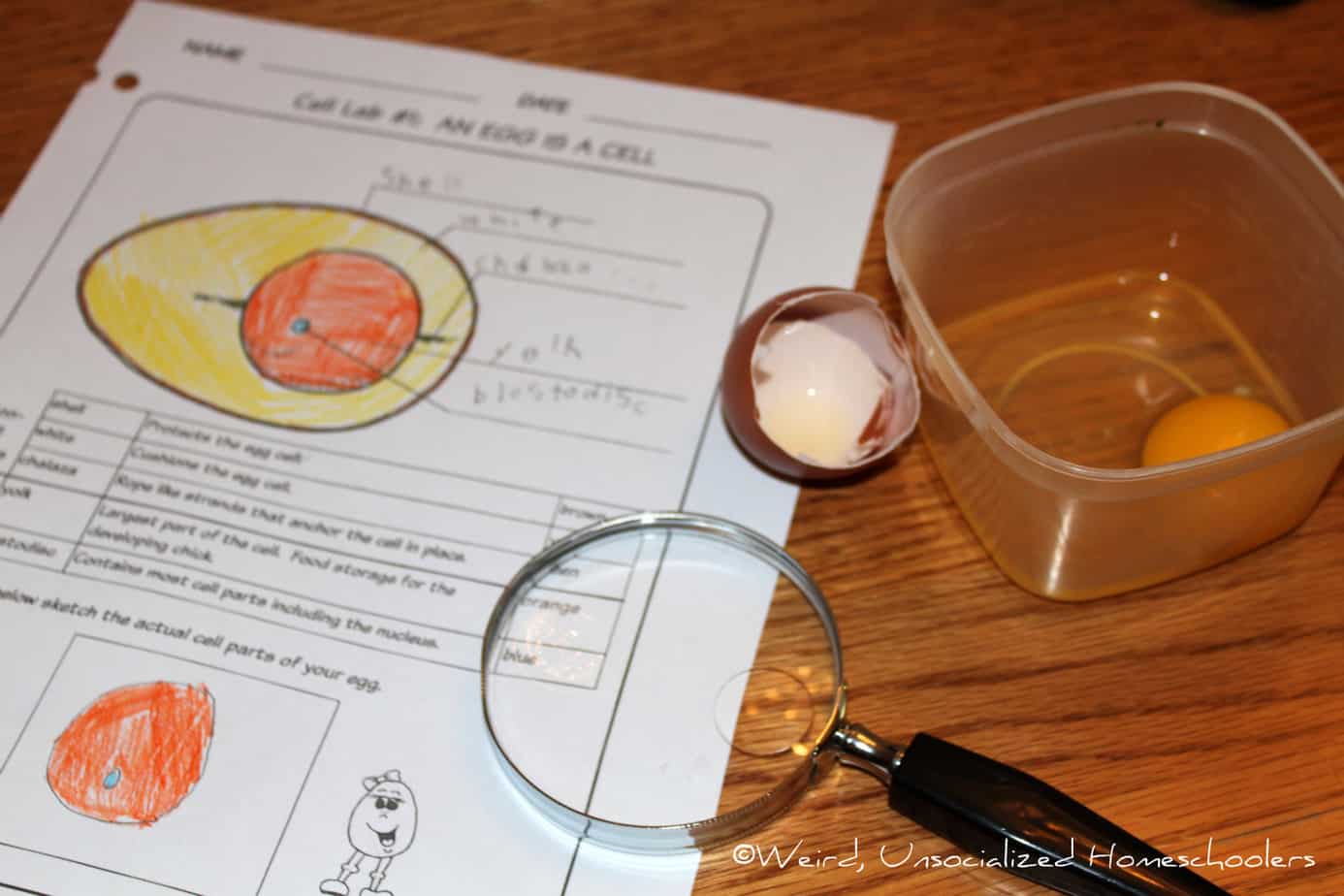 We were supposed to make a three-dimensional cell, you know, the whole Jell-O thing, but somebody — I won’t say who; it might have been the youngest male in the house, but I’m not saying — ate our orange nucleus.  I got a new orange and hid it, so that will be on the agenda for next week.

Brianna had her first volleyball game Thursday night.  Her team lost, but they played so well!  They have improved so much since last year.  Their coach had told them that this would probably be the toughest team they played all year, so we were all very excited to see how close the scores were.  Our girls lost, but they didn’t get stomped.  A couple of the games (sets?  matches?) were very close.  If this was, in fact, the toughest team, I think we’re going to have a really good season.

Next week the craziness begins.  Brianna starts her Spanish class, taught at a local church for a small group of homeschoolers.  It’s supposed to be a pretty tough class, so we’re a little nervous about it, but it’s an extremely reasonable price and a much better idea than me teaching Spanish, so we’re going to see how it goes.  The following week, Megan’s last year of music starts and we’ll be at a full load of subjects and outside classes.  Yikes!

How was your week? Be sure to post about it and sign up with MckLinky. If this is your first time to join us, be sure to read the Weekly Wrap-Up guidelines.