Welcome to another Weekly Wrap-Up! I hope you’ve had a wonderful week. I was a little worried about ours. The first week back following a busy spring break and a busy week with a busy Monday did not sound like fun, but it’s actually gone pretty well.

I was able to catch up some laundry and housework last Sunday afternoon since our small group got canceled Sunday night, so I wasn’t as behind going into Monday. A neat, basically clean house free from piles of laundry is good for my psyche.

Megan had her first craft club meeting on Monday. A few weeks ago, some moms on our homeschool group’s email group started talking about social opportunities for our social butterfly girls. One of the moms graciously agreed to host a monthly craft club to give the girls a chance to spend some time together. 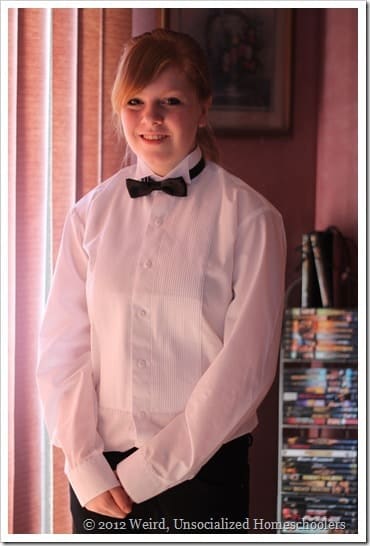 My oldest ready for her first day of work.

I was a little worried about my youngest two kids before the club meeting. I was starting to wonder where I had gone wrong with them. Part of our history lesson was about slavery.

We’d been talking about the Declaration of Independence and this lesson was looking at the question of how the founding fathers could have drafted a document proclaiming that “all men are created equal and are endowed by their Creator with certain unalienable rights, that among these are life, liberty, and the pursuit of happiness,” while many of these same men had slaves.

The book looked at three reasons why many people in that day did not see the irony in declaring all men equal while owning slaves. After the discussion, the assignment was to debate the slavery issue. One child was supposed to be for slavery and one was to be against.

Assuming that the kids would fight over who had to defend slavery, I did the “pick a number between one and ten” thing. Megan won, so she got to choose. I was rather surprised that she chose to argue for slavery. I was even more surprised, though, when Josh got mad that he had to argue against it.

Arguing ensued, along with total confusion on my part. I was really starting to worry about my kids and where these attitudes came from…until I realized that they were supposed to come up with three reasons to argue their point and the book had listed three reasons why people used to think slavery was okay.

My kids aren’t racist; they are lazy. I’ve never been so relieved to have lazy kids.

(For the record, yes, I realize that is exceptionally lazy since they should be able to tic off dozens of reasons why slavery is wrong…and, of course, they did. Josh was done and ready to argue debate in no time. I think it was just the principal of the fact that one of them got a free ride because we’d just discussed the answers.) 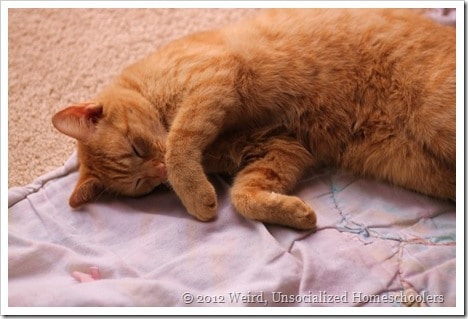 Josh is getting as bad as me about snapping photos of the cat. He took this one while I was gone for awhile Thursday afternoon.

The second funny story from my week happened while Megan was in her craft club meeting. Parents didn’t have to stay, so I ran some errands. I wound up with some extra time, so I decided to do something that I’ve never done before – go to Sonic for an ice cream.

I pulled up at one of the little order/parking places and rolled down my window. I waited a minute, but no one asked to take my order. If you’ve ever eaten at Sonic, you know there’s a little red button on the menu. I started suspecting that I was supposed to push the button, but I wasn’t sure.

I thought of calling a friend, but I didn’t want the people in the Sonic to hear me calling and asking what was, probably, a stupid question. (Although, in my defense, they should have a sign or something. Not everybody knows how things work at Sonic.)

So, I texted a friend. It went something like this:

Me: Are you supposed to push the red button to order at Sonic?

So, I pushed the button and gave my order. They told me my total. I saw the little card reader thing, but I had cash. More texting.

Me: Do I pay when they bring the order.

Friend: Yes, or you can scan your card by the red button.

Me: Thank you. I’ve never eaten at Sonic, so quit laughing at me because I know you are.

The rest of the week has been pretty much your ordinary, average stuff – school, play practice, school, book club meeting, school.

“Trail Guide to Learning adds such a nice, predictable routine to my days that I find I get more done in other areas. I find little pockets of time to wash, dry or fold a load of laundry or wash the dirty pots and pans from last night’s supper. Even on the days when we’re behind and finishing school late, I tend to get more done. I love it!

It’s so nice being able to find those little snippets of time. It makes my days feel so much more productive without being rushed or stressful.