Last Monday, the kids started begging Brian to go get doughnuts. Not just any doughnuts, mind you. Krispy Kreme doughnuts. 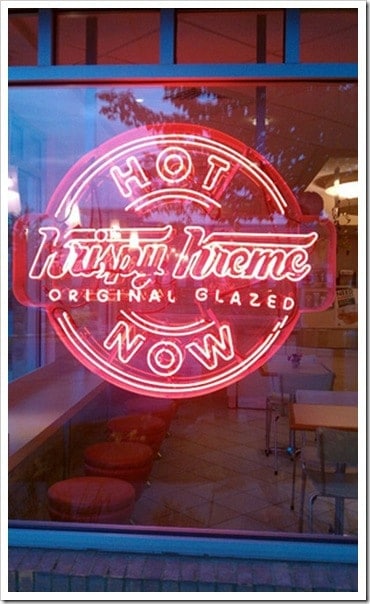 They didn’t wear him down until Wednesday. I was going out with some friends for dinner. I didn’t tell them to save me one. They knew better than to eat them all.

Why am I telling you this on a fitness blog?

Well, we used to get Krispy Kreme doughnuts pretty regularly. Since the Monday before Thanksgiving 2009, I’ve had them once. Well, twice now. Yes, I was eating a doughnut and I wasn’t going to feel the slightest bit guilty about it. 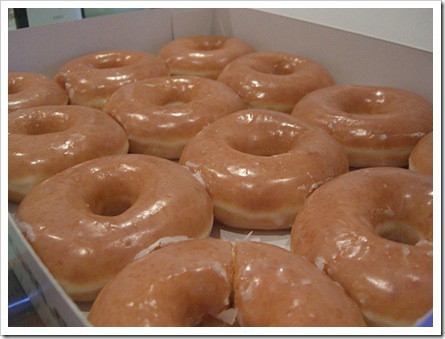 I got home late that night, so I waited until the next morning to eat my doughnut. I was headed out for my long run, so I figured that would be the perfect time – enjoy it, then, go run it off.

I usually read my Bible while I eat my breakfast. I couldn’t do it. I tried, but I actually had to close my eyes and just totally and completely savor each bite of that doughnut. It may have been because it was early that my eyes were watering – they do that – or those may have been actual tears of joy. I’m not quite sure.

All I know is, back in the day when I used to inhale two or three hot, glazed doughnuts, one after the other, I never enjoyed them like I enjoyed that one doughnut that I savored.

I thought of The Biggest Loser episode either earlier this season or last season when they cited a study that showed that an obese person had to eat three times as much to get the same amount of pleasure that a thin person did from a food. I honestly think that’s true.

I can truthfully say that I really think it was more satisfying to fully enjoy that one doughnut than it would have been to scarf down three of them. That’s truly what moderation without depravation is about.

Now, in the interest of full disclosure, I did eat one more doughnut at lunch later that day. I almost didn’t, but then I decided that, if it was going to be another year and a half or more until I could have another one, I could enjoy one more, guilt-free.

Have you had any moments lately when you’ve truly savored and enjoyed something and realized that truly enjoying a reasonable serving was much better than scarfing down a guilt-inducing, unreasonable amount?