Happy Friday! I hope this week’s wrap-up finds you celebrating the conclusion of a wonderful week. I know that, for some of you, it won’t. For you, I’m hoping that next week is better and that the weekend rejuvenates you.

It’s been a good, busy, productive week around the WUHS house. I’m trying to remember what happened Monday, but that is a distant blur in my memory now. Tuesday, Brianna had her first cast meeting for her first-ever play. She’ll be playing an Oompa-Loompa in Charlie and the Chocolate Factory.

Some kids might be disappointed in a relatively small role, but Brianna is thrilled. It gives her a chance to see what it’s like to be in a play without the stress of a speaking part. There is dancing, though. Yes, the little Oompa-Loompas will have choreographed dance parts. 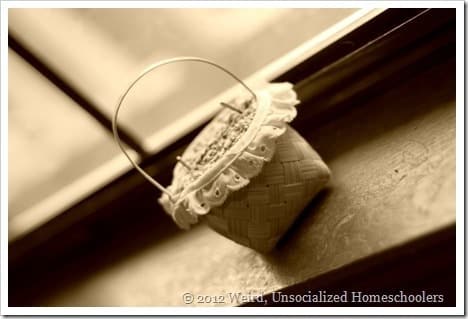 We had Megan convinced to let me email the play director and see if Megan could be an Oompa-Loompa, too, since some of the kids apparently decided they didn’t want that role and dropped out. Turns out, though, that Brianna wants this to be her thing without the interference of a little sister. I can understand that. The next play is fair game for either of them, though.

Today, Josh turned the hook that my birdfeeder hangs on so that we can see both sides from the dining room window since the birds always want to sit on the far side. We were watching them – a couple of cardinals and a chickadee – when I commented that I needed to work on the feeder so that it was angled so that I could see both sides.

Well, duh. That’s why I keep him around – he’s a great problem-solver. That and the fact that he makes me laugh. Okay, I keep him around for lots of reasons, but he really does frequently see solutions to things that I’ve missed – things more complicated than turned bird feeder hooks.

I think I’ve probably said this before, but I am loving Trail Guide’s built-in catch-up day! It’s made Fridays such a relaxing day. And, no, that doesn’t mean that we’re sitting around doing nothing. It does mean that we can plan extracurricular activities and not feel stressed and rushed trying to get everything else done.

Yes, I know I could have done that before, with my own planning, and I tried, but I never did quite pull it off in a way that felt like Fridays do now. Today, we had some things to catch-up because of an appointment Wednesday afternoon. We were able to get those things done, along with the things from Trail Guide that we typically do on Fridays and math and still not feel rushed and stressed.

Josh was supposed to have another drum lesson today, but his friend – whose dad is giving him the lessons – called to say that his grandpa had a stroke. They don’t know, yet, how severe it is, but I know the family would appreciate your prayers for his recovery. 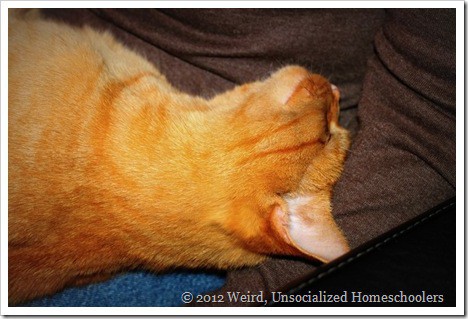 Josh took this one of the lazy cat asleep in my lap.

I got in one of those cleaning fits today after waking up early. I managed to clean out the kitchen cabinets, the fridge, and the “pantry” in the garage. I unloaded and reloaded the dishwasher, cleaned the downstairs bathroom, and vacuumed! I wish those moods would hit more often. My house would be a lot cleaner.

I have also claimed the Mom-of-the Month award (because I know the excitement won’t last for a full year) today when the mail arrived. There were three packages – it was a fun mail day! One was a new game for our family game nights – Guesstures – the second was something for me and the third was what won me the award.

Megan has been looking for The Wimpy Kid Movie Diary for weeks in order to complete her Diary of a Wimpy Kid collection and hasn’t been able to find it. I had some Amazon credit, so I ordered it for her. She was watching me open the packages. I opened that one and said, “Well, I don’t know why they sent me this book. I won’t read that.”

She was so excited! I love being able to do stuff like that for my kids sometimes. It makes me feel as good as it does them.