It’s Weekly Wrap-Up time again and I hope lots of you will participate this week…because I need some encouragement and inspiration. If I could describe this week using only one word, it would be “rut” or possibly “boring.”

I don’t know if it’s just me or what, but I have just really felt dull this week. I’ve felt like we haven’t learned nearly as much about Italy as we have the countries that we’ve studied previously for Around the World Day. And, it didn’t help to have this confirmed by my thirteen-year-old. It seems like we’ve learned a lot about ancient Rome, but not so much about modern Italy. What’s bad is that I can’t quite put my finger on what’s gone wrong. We’ve used the same approach that we’ve always used when studying our chosen country.

Maybe that’s the reason for the “in the rut” feeling. I mean, I would think “tired and true outline, new and different country” would stand us in good steed, but maybe it was time for a different approach. I’m strongly considering just doing an “Italy immersion” week next week and seeing what we can pull out for Around the World Day. If I decide to go with that, I plan on asking the kids what they had hoped to learn about Italy that we haven’t yet learned, then, hitting the library.

On a positive note, I took my own advice and re-read my favorite “Teach Your Child to Read” article. This week, I had Josh and Megan pick a book from their shelves each day for our reading practice. I felt like we made much more progress in reading this week than normal. Whenever they came across a word they didn’t know, I’d either supply it for them or tell them the applicable phonics rules so that they could figure it out. A lot of times, they could figure the word out simply based on the context of the sentence. 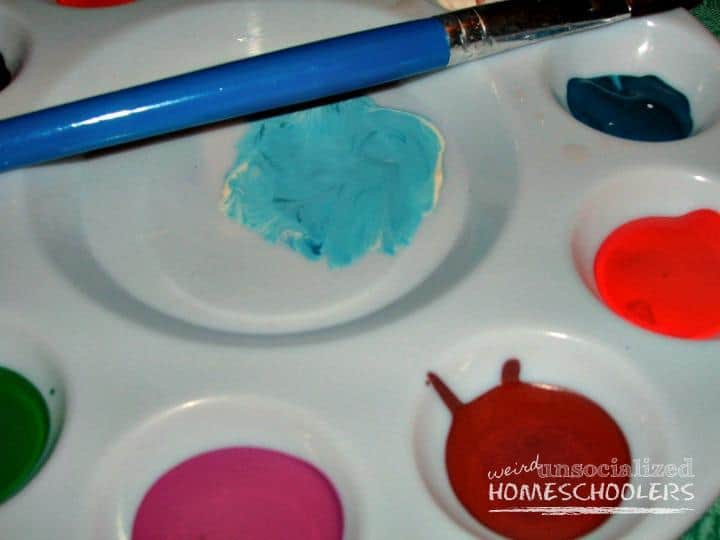 We ended the week on a little more interesting note, by pulling out the paints for the kids while I read. One of the best purchases I made at the curriculum fair this year, were these little, round paint trays. I’ve since seen them at a couple of hobby stores for $1 or less. I love them because the washable tempera paints that we use wash right off the trays and the wells are small enough that we’re not wasting paint like we were when I was using ice cube trays. The trays also have a large area in the center for mixing colors, which the kids love to do.

We also did our nature walk, which I’ll recap in a separate post later this weekend. Brianna worked on our paper mache Leaning Tower of Pisa and I began working on our Roman headpieces again — finally. I wasn’t really eager to burn my fingers with the hot glue again, so we’re trying a different technique. Once I decide whether or not it’s effective, I’ll post some details and pictures…well, unless I decide that it’s NOT effective.

I’m hoping to do some reflecting and planning this weekend to see if I can figure out if it’s just me going through a phase or if it’s time to change things up in order to get out of the rut that I feel that we’re in. I know that we have these ebbs and flows and I can live with that. I just want to see if there’s anything that I could or should be doing to make sure that we’re including enough of the things that make learning more than just inputting information. I feel that it’s a blessing to be able to educate my children at home and I don’t want to squander this time.

So, what about you? How was your week? Leave your comments here or post about it on your blog and leave your link so that we can share some ideas and get inspired.

**Links are now closed. Please join us for the current week’s edition of the Weekly Wrap-Up**