Let me just start by saying, I loved it! My first half-marathon was every bit as exciting, exhilarating and challenging as I thought it would be. The sense of accomplishment when it was over was incredible.

Race day dawned bright and early. I was up before the sun, which, as a friend who knows me well said, was impressive in and of itself.

(Yes, I realize I need to clean my stove.)

I started my day off with my standard bowl of Kashi cereal, though I let myself be a little more generous with the serving size than normal. 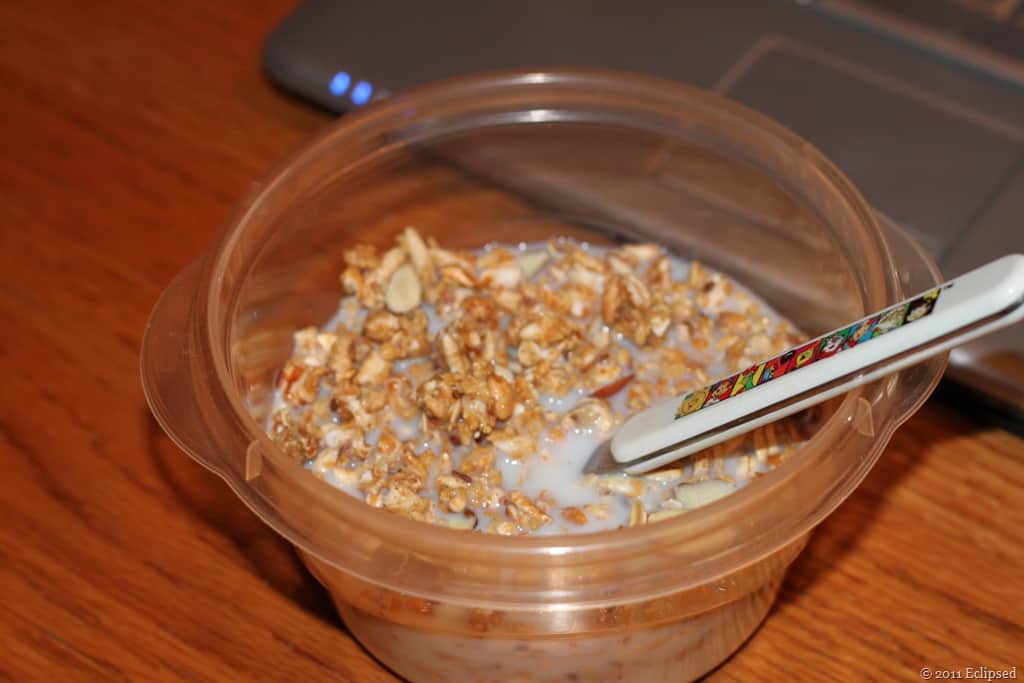 It was so cold! On the way, we passed a sign that displays the temp – it was 29 degrees! 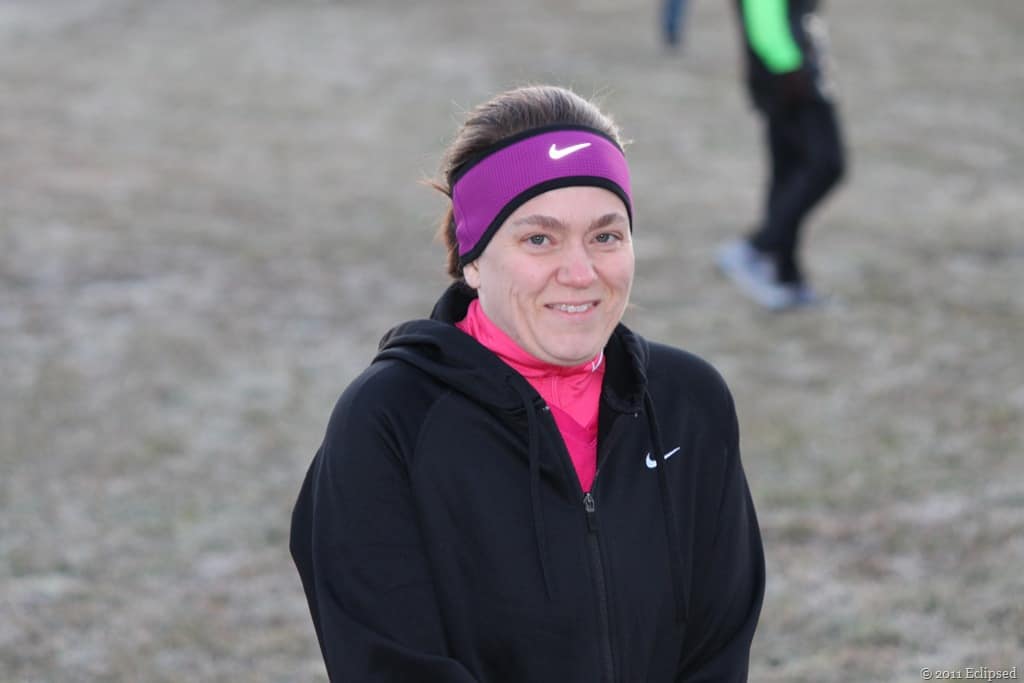 Running shoes are designed for air flow, not keeping toes warm – mine were frozen! The race start was delayed by 15 minutes, so we went into the heated registration tent to warm up. It helped, but my toes still didn’t defrost.

When I went to line up at the start, Brian stayed nearby so I could hang on to my jacket as long as possible. Really, though, once I was in the crowd of people the cold wasn’t so bad. 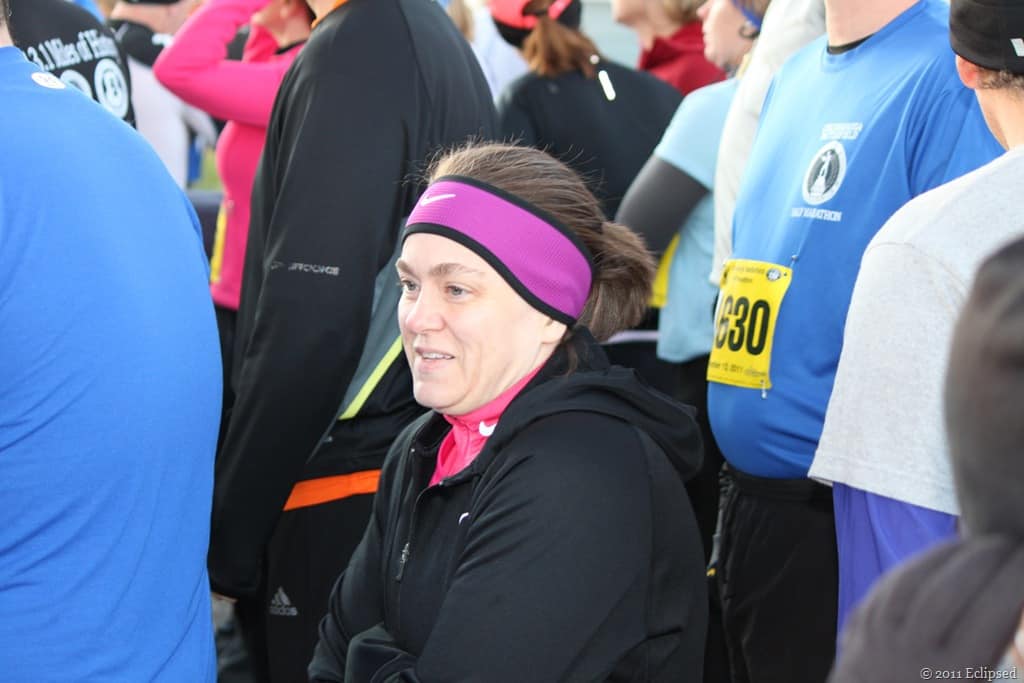 I warmed up fairly quickly once the race started. By Mile 2, I could feel my toes again. By Mile 7, I had settled in with a group of two women and one man who were running at my same pace. The two women were the two to my right in this picture: 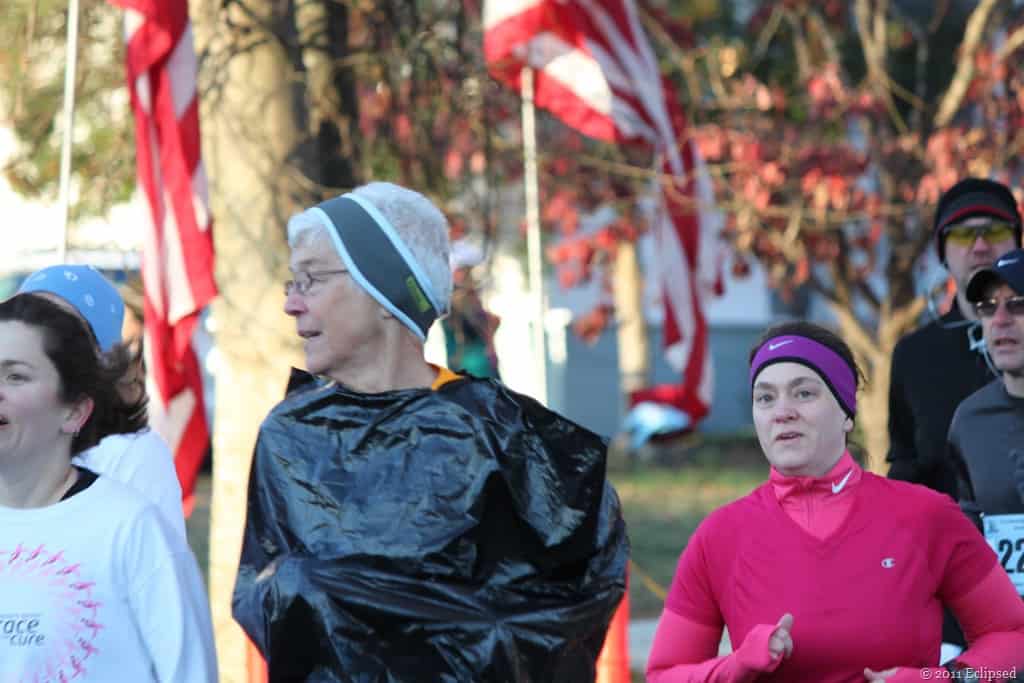 The older lady said she had run 35+ half-marathons, but it was the first for the rest of us. Yes, that’s a trash bag that she’s wearing. A lot of runners do that – it makes a cheap, throw-away jacket for when you warm up.

It was a gorgeous day for a run, despite the cold. The sun was shining and the setting, through a national park, was beautiful. There were more hills than I remembered and my quads were feeling it yesterday.

My goal was to run an 11-minute-mile pace or better, and I maintained that fairly well. I started feeling really tired about Mile 11, but not quitting tired, just “I’ve run 11 miles” tired.

Overall, I was very pleased with how the race went. I ran the whole thing with the exception of walking through three or four water stations so that I could actually drink the water rather than wear it.

I was afraid I wasn’t going to have enough steam left to sprint the finish, but I did. It definitely wasn’t my fastest sprint ever, but I did pick up the pace. It was such an incredible feeling of accomplishment to cross that finish line.

My official gun time was 2:28:28. They had some kind of problem with the chips, so I have no idea what my chip time was. Probably about a minute or so faster. It didn’t take too long after the gun went off to cross the start line. 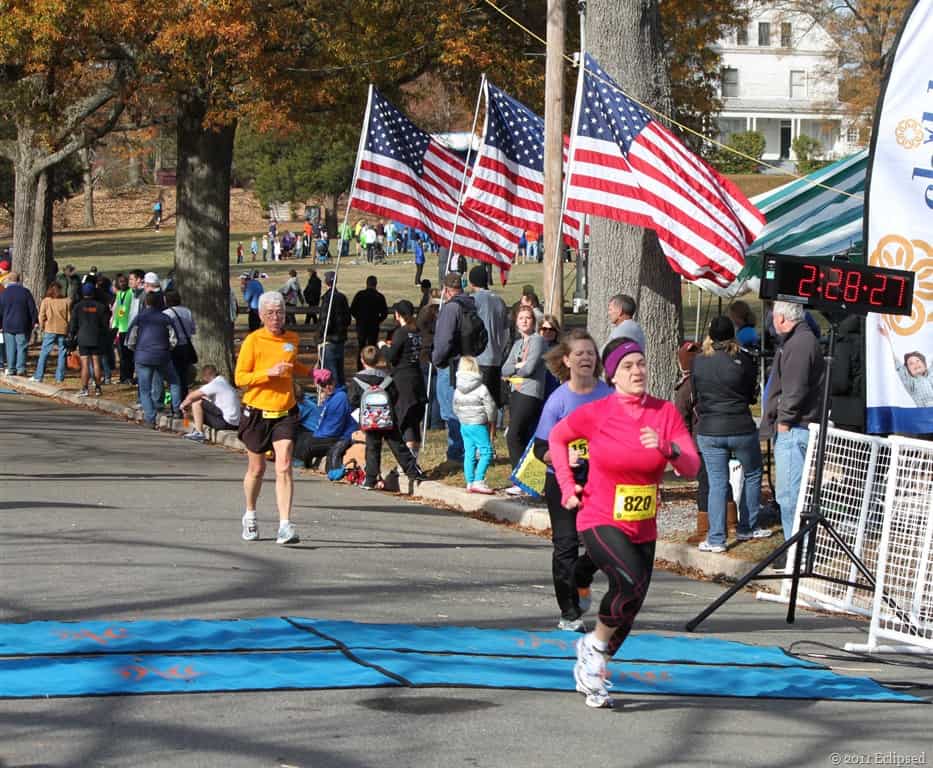 Behind me, in yellow, is one of the ladies I ran most of the way with (picture above). The guy who ran with us turned it on for the last tenth of a mile or so and finished just before me. You can see him in the next picture, behind me, bent over pulling his chip off his shoe. 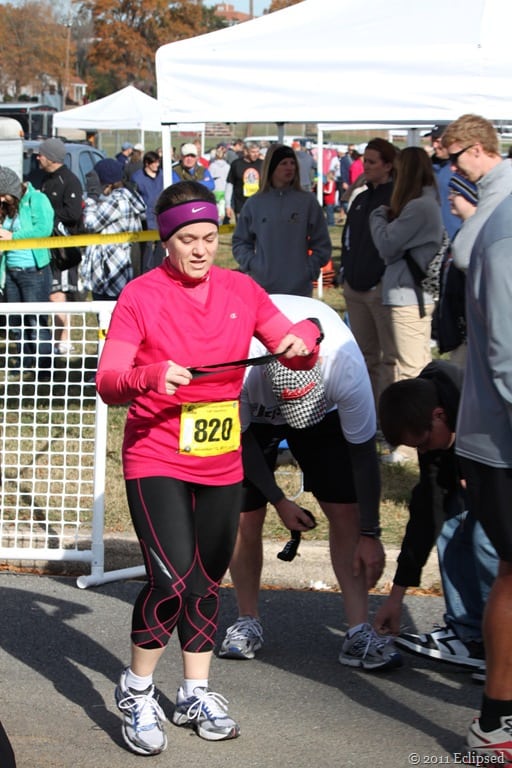 We were strangers, but there was a great feeling of support and encouragement between the four of us. I was glad to have run with them.

I think a big part of my excitement was having done something that, two year ago, I never would have dreamed possible. And, not only did I do it, but I did it well. 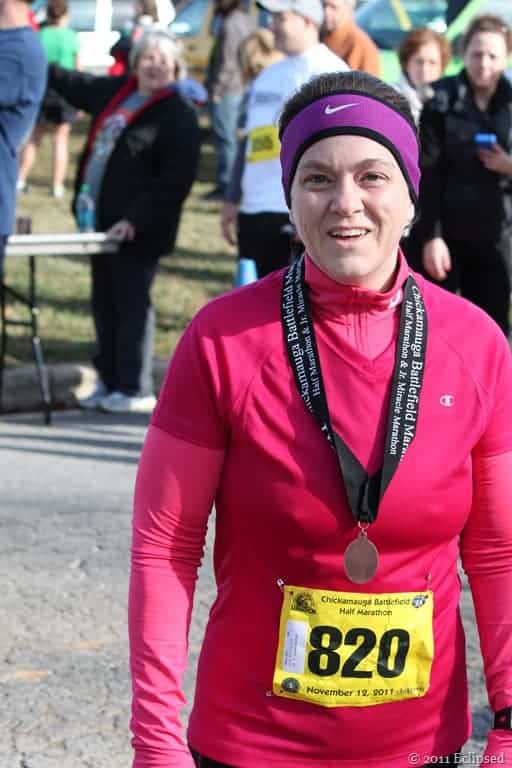 Yes, I’m definitely a “mid-packer” – I’m not going to win any awards, but I’m not going to be last either – and there are plenty of people who are faster than me, but I ran my race the way I wanted to. I wasn’t huffing and puffing, I ran it, and I finished in the time I was shooting for. You can’t ask for more than that.

My dad and step-mom showed up to cheer me on. 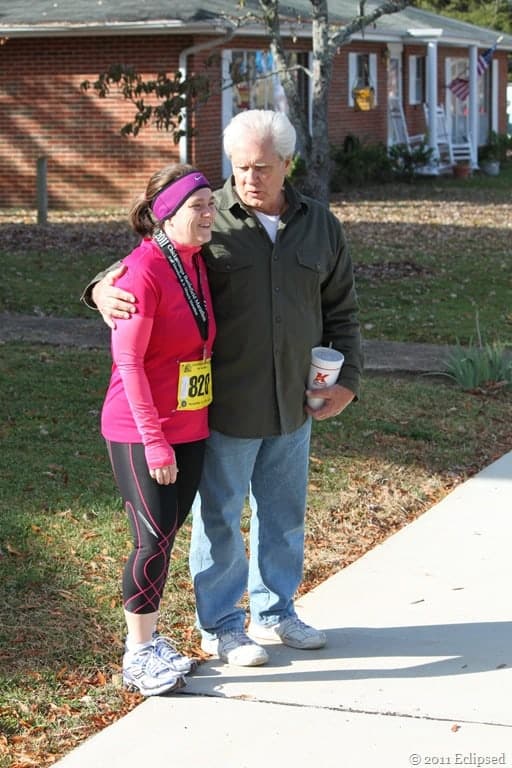 They even bought me this great necklace to celebrate my first half-marathon. 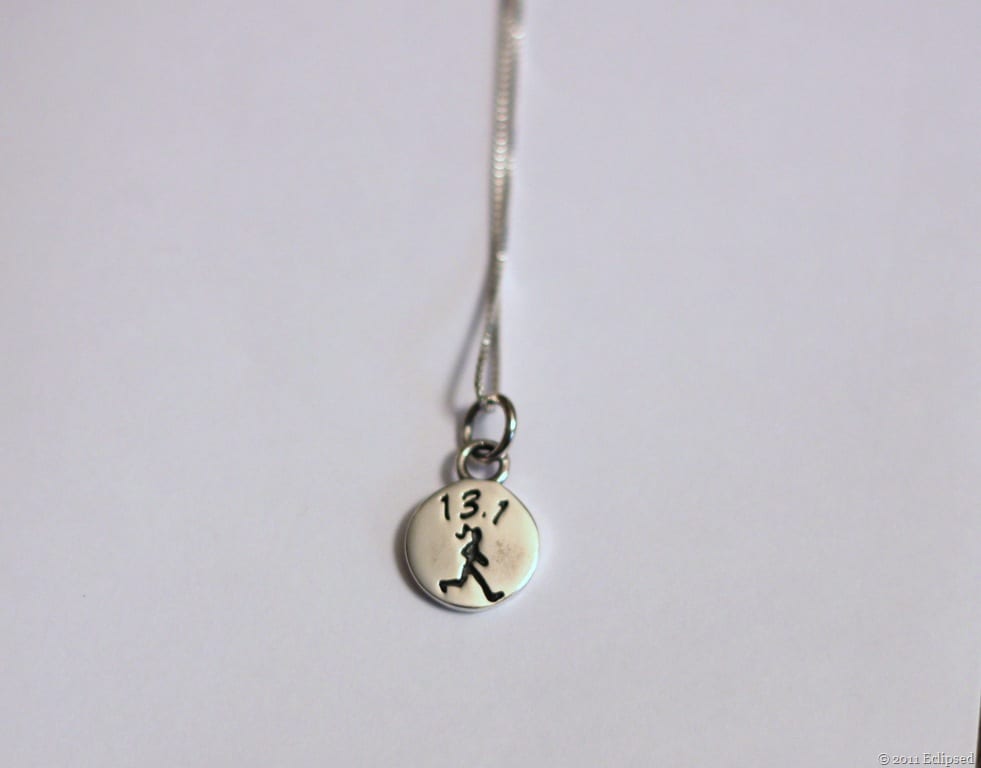 My running buddy crossed the finish line a little while after I did. I think we agreed that the feeling of accomplishment made up for all the hours spent training in the heat of summer, getting up early to make time for long runs, and standing around in below-freezing temps. She said she’s never seen a bigger smile on my face than in this picture: 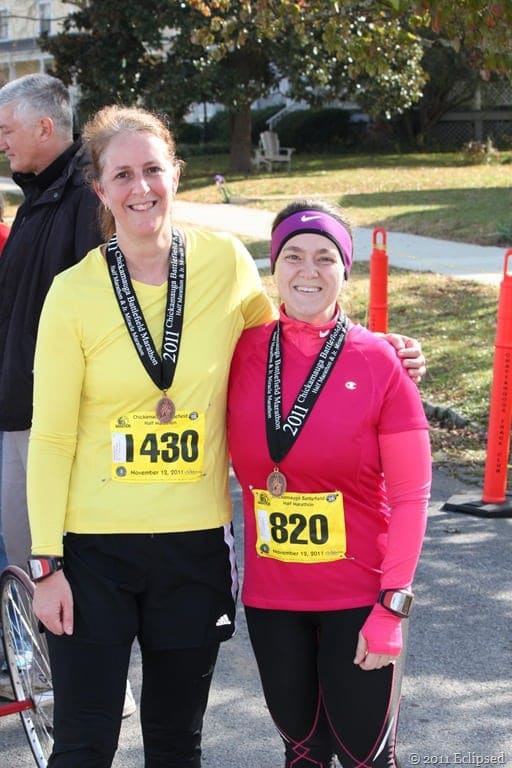 The whole thing was just incredible…and I’m already planning the next one!